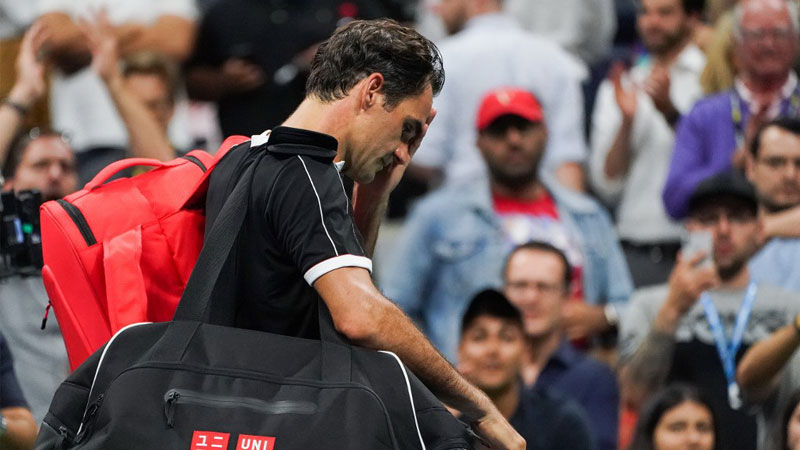 NEW YORK: Grigor Dimitrov rallied for a shocking upset of 20-time Grand Slam champion Roger Federer at the US Open on Tuesday, the lowest-ranked New York semi-finalist in 28 years advancing to face Daniil Medvedev. The 78th-ranked Bulgarian, who had dropped all seven prior meetings with Federer, made a dramatic fightback to defeat the Swiss third seed 3-6, 6-4, 3-6, 6-4, 6-2 at Arthur Ashe Stadium and will face Russian fifth seed Medvedev in Friday’s semis.” I’m just happy,” Dimitrov said. “The only thing I was telling myself was to stay in the match. Physically I was feeling pretty good. I was hitting some shots against him that were hard to hit.” Dimitrov reached his first US Open semi-final to match the deepest Slam runs of his career from Wimbledon in 2014 and the 2017 Australian Open. Not since 174th-ranked Jimmy Connors reached the 1991 quarter-finals had New York seen so lowly a figure on the ATP ratings list reach the last four. Dimitrov is also the lowest-ranked Slam semi-finalist since 94th-rated Rainer Schuettler of Germany at Wimbledon in 2008. Federer was denied on five break points in the 10th game of the fourth set and Dimitrov held to force a fifth set.

“I was trying to stay in that game and make him stay on the court as much as possible. After that he started slowing down a little bit,” Dimitrov said.” It’s a best of five sets. Anything can happen.” Federer went off the court for a private medical timeout to treat his upper back near his neck.” This is Grigor’s moment, not my body’s moment,” Federer said. Dimitrov broke Federer twice on the way to a 4-0 lead in the final set and the 38-year-old Swiss star had no effective reply, foiled by 61 unforced errors in falling after three hours and 12 minutes.” It’s OK. It’s how it goes,” Federer said. “I tried my best. I fought with what I had and that´s it.”Federer, a five-time US Open champion who hasn’t lifted the Flushing Meadows title since 2008, would have become the oldest Slam semi-finalist since Jimmy Connors at age 39 at the 1991 US Open.

Serena grabs 100th US Open win: Serena Williams earned her 100th win at the US Open with a brutal 44-minute demolition of Wang Qiang, firing an ominous warning to rivals in her pursuit of a record-tying 24th Grand Slam title. Six-time US Open champion Williams dismantled Chinese 18th seed Wang 6-1, 6-0 in a complete mismatch that was the quickest at this year’s tournament to set up a semi-final clash with Ukrainian trailblazer Elina Svitolina. Williams brought up a century of US Open wins to move to within one of the all-time leader Chris Evert.” It’s really unbelievable, literally. From when I first started here, I think I was 16, I didn’t think I would ever get to 100. I didn’t think I would still be out here,” Williams said.

The 37-year-old American is seeking a 24th major title to match Margaret Court’s longstanding record, and smacked 25 winners against first-time Slam quarter-finalist Wang, who failed to hit a single one. The 27-year-old Wang had not lost a set during her best Slam run that included a defeat of reigning French Open champion Ashleigh Barty in the last 16, but she was powerless to stop a Williams onslaught at Arthur Ashe Stadium.

“When I play someone who is playing really well, I know I have to either step it up or go home and I wasn’t ready to go home. I had to come out here and play really well,” said Williams, suffering no ill effects from the ankle she rolled in her previous match.” Physically I’m feeling great. More than anything I’m just having fun every time I come out here.” Wang, trying to become just the fourth Chinese player to reach the last four of a Slam, won just four points in the second set and 15 in total.” It’s not easy to play against her,” Wang said. “The power, like, I cannot handle it. Just too much for me.” Williams captured her last Slam title at 2017 Australian Open while pregnant and hasn’t won the US Open since 2014.