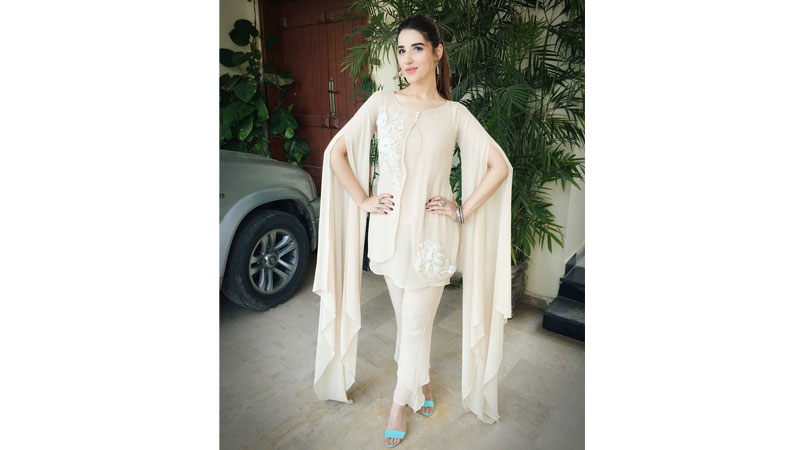 If there is one word which could describe actress and producer Hareem Farooq, it is ‘versatile!’ Famed for her acting prowess and humble attitude, she is one successful Pakistani actress who has become a household name because of her hard work and determination.

Her work, however, knows no boundaries; apart from being an actor, she’s also an accomplished model, celebrity judge, a superb host and the youngest female film producer and if all these aren’t enough, she has also been appointed as the spokesperson for L’Oreal Professional in Pakistan, along with being the Veet Academy Health & Fitness Expert for Veet Pakistan.

Despite her young age, she has accomplished so much in such a short span of time – something that takes others years to achieve and it seems like this young over-achiever has no intentions to slow down anytime soon.

DEBUT — Hareem Farooq started off her career with theatre back in 2012, playing the lead role of Fatima Jinnah in “Pawnay 14 August” and spellbound the audiences with her character, Kiran in “Aangan Terha”.

The succeeding year, horror thriller Siyaah earned her a big screen debut as well as the Lux Style Award for the Best Actress in a debut role.

TELEVISION — after reigning the theatre, she made her television debut with Mausam alongside Ahsan Khan and Yumna Zaidi in 2014 on Hum TV. After her first blockbuster drama, there was no stopping Hareem and she became part of one good project after the other, Diyar-e-Dil being the most famous of them all. Her last venture on the small screen Main Khayal Hoon Kisi Aur Ka was the biggest hit of recent times.

Hareem Farooq started off her career with theatre back in 2012, playing the lead role of Fatima Jinnah in ‘Pawnay 14 August’ and spellbound the audiences with her character Kiran in ‘Aangan Terha’

Hareem proved herself to be one of the most talented artists, who has played many impressive roles and garnered different accolades. Her versatility can easily be seen in the diverse roles she has undertaken and completely excelled in.

FILMS — in 2015, when Hareem’s TV career was flourishing already, the charming sensation picked an additional feather of being Pakistan’s first female actor-producer on her shoulders by co-producing Janaan with Imran Raza Kazmi as a partner in IRK Films Productions.

The extremely passionate versatile star has left people awestruck simply with her commitment towards her work and slowly and steadily climbing up the success leader.

The fashion prima donna took the industry by storm with her 2018 blockbuster Film Parchi in which she played the lead character of a female don. And her latest release Heer Maan Ja is currently running successfully in cinemas all over Pakistan.

HOSTING — Hareem’s hosting career also doesn’t need any outline, she is the first female celebrity to get the honour of hosting The Pakistan Super League by hosting the 3rd PSL opening ceremony in Dubai. Alongside she has been hosting many Awards shows and proved her mettle every time she is on screen.

Though Hareem has gained some rave reviews for all the characters she has depicted so far; it’s the quirky and lively character of Heer from Heer Maan Ja that we had been waiting for quite eagerly, and we were not disappointed! This woman is a powerhouse of talent in all aspects and it seems like there is no stopping her!

Ever heard the quote “You are made to make a difference, so embrace every opportunity to do so”?

Hareem happens to be a true follower of this one.