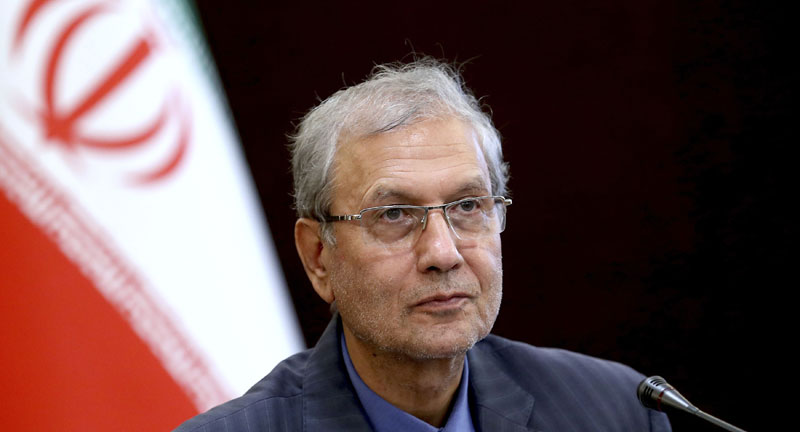 Iran will “take a strong step” away from its 2015 nuclear deal with world powers if Europe cannot offer the country new terms by a deadline at the end of this week, a government spokesman said Monday as top Iranian diplomats traveled to France and Russia for last-minute talks.

The comments from Ali Rabiei reinforced the deadline Iran had set for Friday for Europe to offer it a way to sell its crude oil on the global market. Crushing US sanctions imposed after President Donald Trump withdrew America from the deal over a year ago have halted those sales.

Iranian Foreign Minister Mohammad Javad Zarif was in Moscow, while his deputy was to travel to Paris with a team of economists Monday in a renewed diplomatic push. The developments come after French President Emmanuel Macron surprised the Group of Seven summit in France by inviting Zarif last week.

Rabiei described Iran’s strategy to journalists at Monday’s press conference in Tehran as “commitment for commitment.” “Iran’s oil should be bought and its money should be accessible to return to Iran,” Rabiei said. “This is the agenda of our talks.”

It’s unclear what the terms of negotiation are. In theory, anyone caught buying Iranian crude oil would be subject to US sanctions and potentially locked out of the American financial market. Already, Iran has gone over limits set by the deal. The International Atomic Energy Agency confirmed last week that Iran’s stockpile of low-enriched uranium still exceeds the amount allowed by the so-called Joint Comprehensive Plan of Action, or JCPOA as the deal is known.

The UN agency also said Iran continues to enrich uranium up to 4.5%, above the 3.67% allowed. Enriched uranium at the 3.67% level is enough for peaceful pursuits and is far below weapons-grade levels of 90%. At the 4.5% level, the uranium can help power Iran’s Bushehr reactor, the country’s only nuclear power plant.

It remains unclear what further step Iran will take, though it could involve restarting advanced centrifuges prohibited by the deal or further bumping up its enrichment of uranium. Iran insists the steps it has taken so far are easily reversible. “We will announce implementation of the third step in a letter to the Europeans if the Europeans do not impalement necessary measures by Thursday,” said Zarif in a Sunday interview with Iran’s parliament news agency, ICANA.