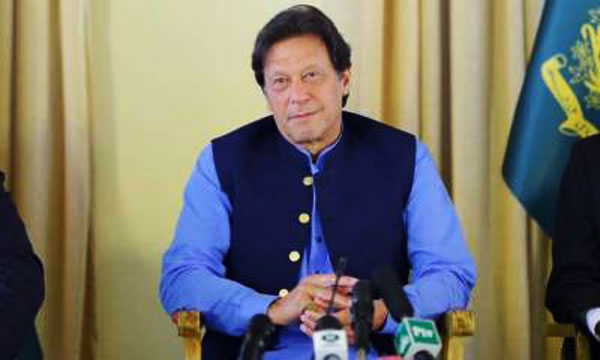 Prime Minister Imran Khan on Sunday once again reminded the world to realise the serious threats posed to regional peace by the supremacist Hindu group Rashtriya Swayamsevak Sangh (RSS), which had taken over the nuclear armed India with a ‘mad ideology’.

Addressing the Islamic Society of North America (ISNA) in Houston via video call, the prime minister said the whole India was under the control of that extremist ideology, threatening the very fabric of Indian society, as all minorities were being systematically targeted. Pakistan, he said, was facing the RSS supremacist threat which had engulfed India, a nuclear armed country with a population of over one billion people.

To make his point, the prime minister referred to the recent development in India’s Assam region where 1.9 million minorities, including Muslims, were being stripped of their nationality. After the Kashmiri Muslims, he said, the Christians were forcibly converted to Hinduism and their churches were attacked in India, while the Sikh community would soon face such a scenario.

“The RSS genie had come out of the bottle and would not return,” he said, and expressed concerns for the future of 200 million Muslims in India.

He said the former Indian home minister, in his public statement, had admitted that RSS terrorists were trained in camps and it had about four million members.

The prime minister once again urged the international community to realise its responsibility in resolving the Kashmir issue. The dispute had put the two nuclear armed countries face to face with each other after the Indian government’s unilateral and illegal action in Indian-held Kashmir, he added. India, he said, could stage a Pulwama-like incident to divert the world attention to Pakistan. It might resort to any misadventure or attack inside Pakistan for diverting the international community’s attention from its gross human rights abuses, carnage and bloodshed in the Occupied Jammu and Kashmir, he said.

The prime minister cautioned the world to realise the consequences of such a conflict, which would not be like something happened in Rwanda or Bosnia, as both the countries were nuclear armed and in case of any aggression, Pakistan would retaliate in a befitting manner.

He said the Organisation of Islamic Cooperation (OIC) was requested to play its role, besides he would raise the issue at the upcoming United Nations General Assembly session in New York. The Indian government clamped curfew in the occupied valley, which entered into 26th day, to suppress the Kashmiri struggle for freedom and self-determination as mandated by the UN Security Council (UNSC) resolutions.

“About nine million people were under curfew. There is complete communication shutdown and media blackout, whereas people were picked up forcibly. Around 8,000 were in prisons and about 4,000 were taken out of the valley. Kashmiri leadership was arrested and even Indian opposition leaders were barred from entering Occupied Kashmir. No news is coming out. About nine hundred thousand India soldiers were deployed in Occupied Kashmir. And all this is happening in the 21st century,” he added.

He said Narendra Modi’s government had annexed Kashmir, which was a disputed territory. “The UN Security Council resolutions had given the Kashmiris the right to decide their own destiny through referendum. The UNSC resolutions still stand,” he added. The BJP government, he said, annulled its own constitution by scrapping Article 370, which gave a special status to the occupied region, along with Article 35-A with the aim to change demography of the area by turning Muslims majority into minority.

“It is also a violation of Geneva Convention as its Article 49 says that you cannot change the demography of the occupied lands,” he stressed.

Dilating upon the RSS, the prime minister said the world, especially the West, were required to understand the fascist ideology of the supremacist and extremist organisation, which was established in 1925 and deeply inspired by the fascist and racist philosophies of Adolph Hitler and Benito Mussolini.

According to that ideology, the prime minister said, the RSS believed in the Hindus supremacy viz a viz the status of all other minorities in India. The RSS had bias against the Muslims rulers, he said, adding, “It believes in ethnic cleansing of the Muslims, it believes that India belonged to Hindus only.”

That ideology, he added, led to the assassination of Gandhi. Pakistan was created, after its founder Quaid-i-Azam Mohammad Ali Jinnah, who was earlier considered as a great advocate for the Hindu-Muslim unity, soon realised that the Muslims in India could not get equal rights as its citizens.

He said that after winning the recent elections in India, the BJP had appeared as a stronger force.

He wanted the world to know that he was talking about India which was taken over by the extreme philosophy and ideology, like the Nazis who believed that a well-organised small group could overtake the large swaths of land.

That ideology was responsible for the worst massacre of Muslims in Indian Gujarat and their lynching for cow slaughtering, he added.

Comparing the serious situation in India, the prime minister said that in the State of Madina, the minorities were guaranteed equal rights and the heads of state were answerable to the general public.

But in India, he said, everything was now the opposite. Even the courts were hesitant to deliver verdicts against the RSS ideology, he added, and cited a case of Pehlu Khan, 55, a Muslim dairy farmer from Haryana state, who was lynched by saffron mob openly in public, but the court let all the murders off the hook.

He noted with regret that after 9/11, every Muslim in the West was suspected and the term Islamic terrorism gave rise to Islamophobia. Prior to it, the Hindus and Japanese also blew themselves, but no one blamed religion for that, he added.

“Terrorism has nothing to do with religion,” he said, and urged the West to realise Muslims’ sentiments of love, affection and reverence they attached with their Holy Prophet (peace be upon him) and others. The freedom of expression could not be used for sacrilegious purposes, he emphasised.

He urged the ISNA members to use their platform and accelerate their efforts to remove misconceptions in the Western world about Islam and the Muslims.