Uchal — a festival of shepherds and farmers of the Kalash tribe 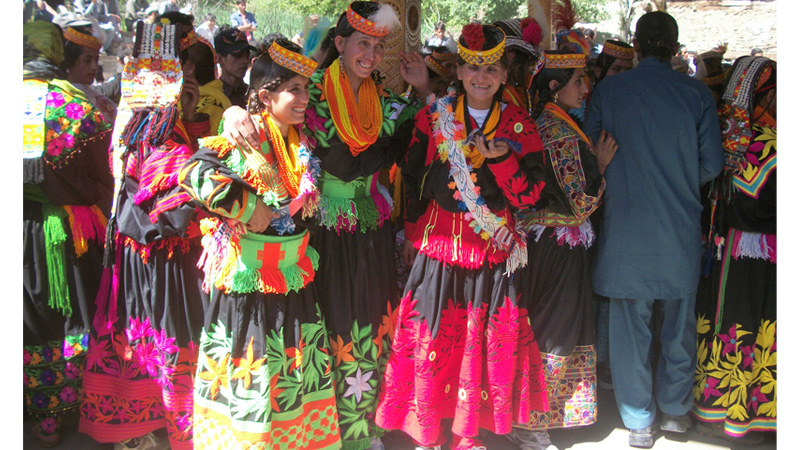 The kalash tribe is one of those tribes who have the least population of just 3,500 people. They reside in three valleys ramboor, bamborit and barir. Though initially they were scattered in 12 valleys of Kalash district Chitral of KPK but with the passage of time they were pushed in these three valleys. Their mysterious and wonderful culture attracts the people of world towards these valleys that is why at the time of any Kalash festival the number of police and agencies is greater than the visitors.

Many anthropologists and archaeologists are of the opinion that they are the decedents of Alexander the Great but during the excavation and exploration of Chitral, they come to know that they are residing here before Alexander the Great. Many of their practices and rituals are similar to the ancient Hinduism. Some of their deities who are worshiped in Kalash tribe are similar to the Hindu god and goddess like Mahadev in Hinduism is called Mahandeo in Kalash tribe. Many of their practices and customs are like the old Greek people rather they claim that they are the offspring of Greek people but unfortunately recent DNA testing could not connect these people with the Greek soldiers. But in spite of this their way of preparing wine, their architecture , jewellery and dress is resembling with the Greeks, even many Greek words are noticed in their language. The culture, dress, language and practices are still wondering the world.

In December they celebrate a winter festival called Choo-moss.

Before the Uchal Festival the Kalash tribe celebrates the Rut-Nut. The rut-nut lasts for two months this is a dancing festival and it closes the girls and boys of the tribe to create relations and it also gives the chance to understand each other. The night of 19 and 20 August is called jay jayyaklawat.

During the dance at gree or at some other place new couples can be observed. There is no restriction to choose the life partner in the festival of Kalash people. But it’s difficult to understand a girl or boy fully in a short meeting during the festival. So the rut-nut and others festivals given them chance to meet each other. The Kalash society gives equal chances to girls as given to boys in every field of life either its education, life partner selection and other matters of the life even a woman has free will after the marriage if she wants to marry some other person, the other person has to pay the double expenses of marriage to the first husband. After the payment the first husband leaves the girl for second person to be marry.

Livestock is everything of many of Kalash people. Almost each family has livestock though the number of sheep and goat is different. So for the livestock fodder they have to stay in open valleys for several weeks. From each family one has to be stay with livestock in the valleys for three-four weeks then he is replaced with another person of family. This loop continuous even after the Uchal Festival. This culture is very much similar to the Cholistani shepherds who also stay with their livestock in the open desert for several weeks and after two or three weeks one member of their family replace him.

During their stay in valleys with the livestock they have to manage everything. They take vegetables, flour and other things with them as per their need. They make a temporary shelter for their animals and for him as well to protect from animals. Sometime they make a group with other shepherds for staying, cooking and managing fodder. It also helps them to reduce the loneliness. The shepherds of Kalash prepare many dairy products during their stay in the valleys with their livestock. They prepare lassi, cheese, yogurt, butter and other dairy products. The shepherds return home after three-four months with the big quantity of dairy products.

The Uchal Festival is celebrated for the successful return of the shepherds with their livestock and for the harvest. An interesting ceremony is organised for the shepherds. Many of the family members from each village/home stay on the way holding home prepared necklace to wear them for the honour and blessing. The necklaces are prepared with the dry apricot, grapes and walnut etc. The shepherds are warmly welcome in the tribe. They thank god for their safety and security in the entire stay in the valley. They also thank god for the collected dairy products during the stay.

First of all with all the villagers they go to Maloosh (worship place) and thank the diety for everything. Only the males of family gathers here.

They also prepare small chapatti on this festival and these chappatis with the butter are placed in the graveyards for their deads. This practice is like the Hindus when on the kriakarm they place small chapatis for the birds and animals to please the deity. All the tribal also visit the Mahandeo for worship and pray. After that they reach to the gree (dancing place). They dance and sing traditional songs to thank the god for everything for the harvesting, for the safety and security of their people and livestock from animals, for the new summer season for this festival as well.

The soft shaking bodies on drum beats give the message of summer. Sometimes, there is a zaftig style of serpentine dance and at times, nymphs dancing in chorus appear happy and delightful of summer. There are charming young men, children and elders of the tribe who also dance on the event.

This is the Kalasha way to thank God. During this dance, many new couples decide to start a new life.

The writer is a PhD scholar. He can be reached at kashifjamil397@gmail.com