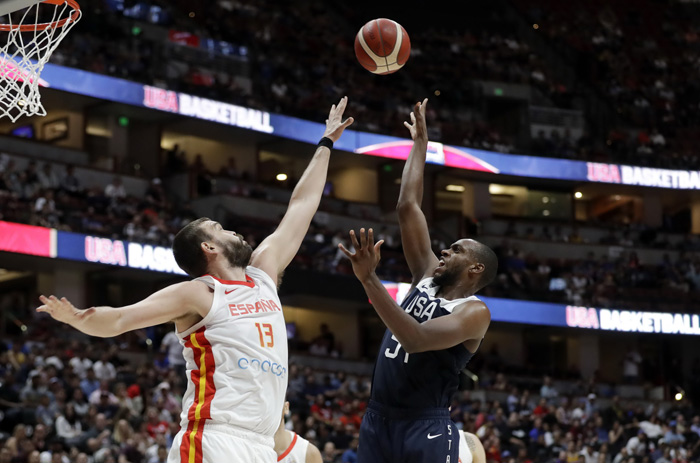 This was a week of wake-up calls for USA Basketball, some provided by unheralded G League players in practice and now more offered up by the Spanish national team.

The Americans learned from both.

Donovan Mitchell scored 13 points, Khris Middleton added 12 and the US topped Spain 90-81 on Friday night in a warmup exhibition in advance of the FIBA World Cup that starts in China on Aug. 31. The Americans shot 55 percent from the field, 58 percent from 3-point range and held a commanding 42-20 edge in rebounds.

“It was a good chance to jump in the fray and see what this is all about,” US coach Gregg Popovich said after his official debut as Mike Krzyzewski’s replacement with the national team. “It was like a baptism for us. New group, players, coaches, all that sort of thing. It was a real experience.”

There was much he liked, such as the rebounding. There was plenty he didn’t like, such as committing 23 turnovers that Spain turned into 27 points. And the score wasn’t all that relevant to him, though it did extend USA Basketball’s program-record winning streak to 77 games and counting.

That run goes back to the bronze medal game of the 2006 world championships, now called the World Cup, and has continued on through the 2007 FIBA Americas Championship, the Olympic runs in 2008, 2012 and 2016 and the World Cup titles in 2010 and 2014. Most of those 77 wins have been one-sided. Only nine have been by single digits, and Spain has been the opponent in four of those contests.

“It was good to see the level and the standard that they’re going to set physically,” said Spain veteran and Toronto center Marc Gasol, who led everybody with 19 points. “It was good for some of the guys that haven’t played against NBA type of athleticism. It was good to see.”

The US led virtually the whole way, had its lead trimmed to eight on a 3-pointer by Spain’s Sergio Llull with 4:10 left, and responded with an 8-0 run over the next minute to restore order quickly. Joe Harris made a 3 to start the flurry, Derrick White got a runner from the lane to fall and Jayson Tatum’s 3-pointer from near the US bench with 3:15 left made it 88-72 as the Americans sealed matters. “Spain’s a great team, an experienced team,” Middleton said. “Tonight was a great test.”

The Americans led 54-41 at the half, after being up by as many as 16 in the second quarter. Even with Popovich using a 12-man rotation in the first half, the Americans were clicking almost from the outset. They shot 61 percent in the half, started 7 for 11 from 3-point land – one of those four misses being a 60-foot try by Tatum that hit the rim – and outrebounded Spain 21-9 over the opening two quarters.

The shooting never really cooled off, nor did the effort on the glass. And now the US will make the long flight to Australia on Saturday with a win to enjoy.

“I think we competed, did a good job,” Spain coach Sergio Scariolo said. “We have kind of a base to build off.”

Spain: Before getting to the World Cup, Spain has exhibitions left against the Dominican Republic, Argentina and Russia. … Much like the US, which needed 52 players to get through World Cup qualifying, the Spaniards also changed lineups often to get through those six two-game windows just to qualify for China. Spain used 29 players in those 12 games.

USA: Mason Plumlee started at center to open the game, Myles Turner started at center to open the second half. … Houston’s P.J. Tucker (left ankle) withdrew from consideration for the World Cup roster on Friday, a decision announced a few hours before the game. That trimmed the US roster to 14 in line for 12 spots on the World Cup squad, and all 14 are going to Australia before final cuts get made. … Boston’s Marcus Smart (left calf) did not play, though is expected to take part in the exhibitions in Australia that start on Thursday.