* To supplement Independence Day celebrations, the Daily Times will highlight, all of August, the individuals who continue to make Pakistan proud. Our second interview is with renowned singer, drummer and music video director Farhad Humayun 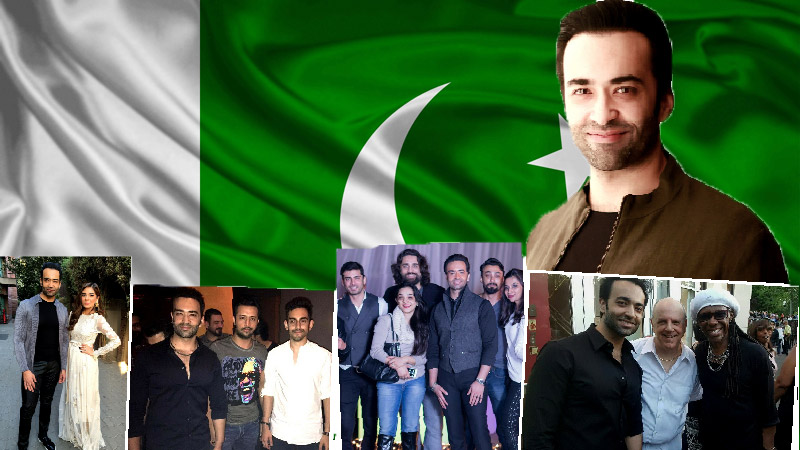 Tell us about your foray into the field of singing. How did it all begin for you?

It has never has been a foray at all. To me, any discipline of art and music, or selection of profession, has been an open and personal choice. I am free! I fear nothing and no one. The only thing ever limiting me would be myself. I’ve been singing for fun since 1999, when I was the music society president at the National College of Arts. Yes, I had played drums for about 20 years before I became a professional singer. I felt it was the next step in my artistic growth and it all came together naturally.

You have been regarded and lauded as a tough rockstar, to battle health issues and balance work and your passion for singing alongside. How challenging has it been?

We never choose to fall ill but I believe we must fight to keep the beautiful thing called life that has been gifted to us. I’ve been blessed with immense love from friends, family, fans and strangers who reminded me there’s a lot more to do and live for. I look at my journey through life very optimistically. It has never been easy being an artist in a country where every art form has been clamped down at some point. From Nahid Siddiqui’s Kathak in General Zia’s regime to Section 144 imposed by Shahbaz Sharif, which prohibits more than two people in public to a 65 percent entertainment tax which destroyed performance and the business of events in Punjab. The truth is ‘they’ don’t want you to play music or celebrate in crowds where people can interact and exchange ideas. Yet, I play music and will continue to do so! The only way is forward.

How has your experience with ‘Coke Studio’ been like and at what point did you decide to distance yourself?

My experience of playing drums and singing two songs on Season 5 was absolutely wonderful. The house band and all the musicians in it were amazing and we’ve known each other and respected each others’ work for a long time. My favourite tracks, on which I played, are both songs by Atif Aslam, Hadiqa Kiani and Farid Ayaz. I didn’t distance myself at all actually. They never called me back to play or sing. I spoke to them for Season 6 but wasn’t invited. My management and I approached them in Season 9 and 10 twice in the Strings years but again they weren’t interested. This year, my management reached out to the producer’s office again but no interest or response. Everyone knows there’s a lot of lobbying for ‘Coke Studio’ and it has certain pet performers it calls in frequently. I wish them the best as I’m self sufficient and very successful which is why I’m doing this interview. A big thank you to the fans who are still engaged in the autobiographical work I produce.

You have renowned parents like Navid Shahzad and Shahzad Humayun. How supportive were they with your choice of career? Did they at any point persuade you to pursue a field more technical?

Both my parents are superstars in what they do. If I can get half way close to what they’ve achieved, I’ll be happy. They have both supported me strongly in my music. My father bought me my first drum set and all my equipment. Mom built me an amazing studio space and has always taught me to be the best I can through hard work and persistence. After graduating from art school, my father did stress on the fact that having a job or a business, I could rely on for money was important, since music is cyclical. So I taught art at Lahore Grammar School for a year and a half. In the Parvez Musharraf years, I ran a very successful and ‘cool’ event management and audio visual company Riot Productions which still exists and is highly regarded for the coolest activities in the country.

We love all of your tracks and singles. Which one has been your favourite and why?

Thank you. All my work is autobiographical so each song holds its own ground. But to answer the second part, I’d say “Jeet” -because it’s my most optimistic and motivational song. “Bolo Na” – because I wrote and recorded it at a very emotional time, “Nimmi Nimmi” – because it’s my biggest hit and has garnered me most acclaim as a singer. I love the instrumental drum and dhol stuff because that’s my forte and marked the beginning of a new era in Pakistani music. It still guarantees the necessary ‘kick’ at any event or your gym motivation.

Tell us about your live singing platform ‘Levi’s Live’. How has it grown over the years and how did it come into being in the first place?

Music is a performing art and needs to be played live and be experienced. A very forward thinking marketing man, Hammad Sohail who was heading Levi’s marketing in 2016 met my team and I and we hit it off nicely. In our conversations, Levi’s Live came into being. We set up a West Hollywood club-like space at my Riot Studios, with the best audio visual experience and Native Rock spearheaded by Uzma Rao made sure the coolest, most enthusiastic music fans came to watch and hear it. It’s the most successful and talked about Levi’s campaign ever. With exceeding taxes on imports and the rupee devaluing against the dollar, Levi’s has slowed down its music activities but there are talks of continuing. However, brand or no brand, my friends and various other artists play and jam at Riot Studios every other week.

I’ll be releasing five of my local Urdu/Punjabi/Saraiki songs and videos as soon as the weather gets better. I recorded these in 2017 at my friend Sarmad Ghafoor’s studio in Islamabad. In 2018, I recorded an English album with some of my favourite and legendary musicians in the history of music. These include Tony Levin on Bass, Hossam Ramzy on percussion, Richard Hilton on keyboards, David Torn and Richy Stano on guitar. I’m mixing this record and looking to release in early 2020.

Through what I do, giving people hope and things to be happy about

I dream of a Pakistan where people aren’t bound by dictatorship, oppression, terrorism or clergy. This will produce extraordinary minds and inventors and achievers who are kind and compassionate. A place where men, women, transgender are all equal socially and in the workplace. I dream of a Pakistan where all religions are respected whether revealed or mythological or modified to individual sects. A place where people feel safe and secure and loved. I’m spiritual, I’m Pakistani.

Tell us about a memorable moment in your career.

There are so many but here are the ones that come to mind are playing at the Royal Albert Hall in London in 2003, creating Overload and watching it grow and bring people joy, producing Atif Aslam’s early work and watching him become the superstar and amazing performer he is, working as a musician, producer and video director and being on set directing giants like Nadeem, Nighat Chaodhry and the biggest star, my mom Navid Shahzad.

The fire in my soul. I don’t know what they call it but it’s inborn and wants to make every person in the audience happy and feel like a champion.

KING OF ALL TRAITS

Farhad Humayun is a multi-talented artist and he inspires us because he’s not just an incredible singer but an amazing songwriter, music video director as well as a producer. He also plays the drums professionally.

Farhad Humayun has come out stronger and even more successful following his battle with brain tumour. He defied his illness with a mighty will power and created even better music post recovery.

He’s the proud recipient of the coveted Lux Style Award in the category of Best Music Video Director for “Ankahi”. He has the highest number of nominations for a musician in the LSAs — 13 in total. He has two prestigious Hum TV Awards to his credit — for Song of the Year for “Jeet” and Most Stylish Producer. In 2005, he won the Indus Music/MTV Award for Best New Artist.

We love how Farhad belts out great vocal in Urdu tracks. He’ll be releasing five of his local Urdu/Punjabi/Saraiki songs and videos as soon as the “weather gets better”, he says.

Farhad has played at the prestigious Royal Albert Hall in London back in 2003 to a crowd of thousands of people.

Farhad created the revolutionary rock band Overload that created a sensation in not just the country but abroad as well. He has also produced some of Atif Aslam’s early work that propelled him to immense fame.