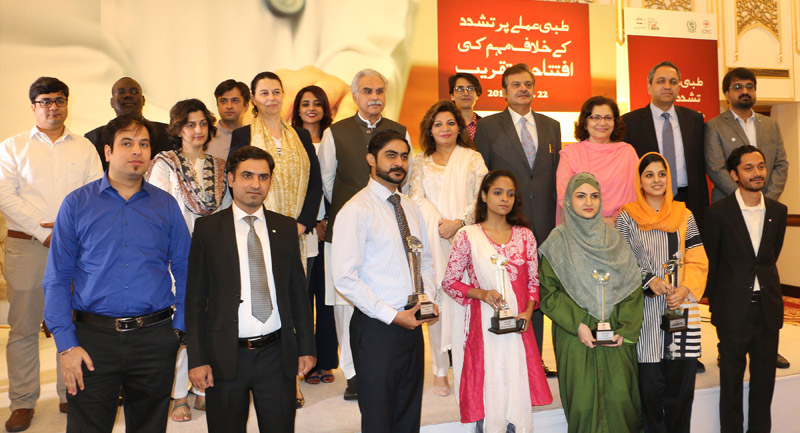 The International Committee of the Red Cross (ICRC) in collaboration with the Pakistan Red Crescent Society (PRCS) has launched a nationwide public awareness campaign called ‘Bharosa Karein’ aimed at fostering respect for healthcare workers and reducing incidents of violence inside hospitals.

The launching ceremony of the three-month campaign was organised at a local hotel, attended by government officials, civil society members and the media.

“Healthcare personnel themselves become vulnerable at the hands of families of victims. This is a commonly observed phenomenon and it is growing. We observe it but do not do anything to tackle it. I am very appreciative of the ICRC and the Pakistan Red Crescent Society for taking up this issue and raising awareness about it, and I assure my continued support for such initiatives,” Special Assistant to Prime Minister on Health Dr Zafar Mirza, who was chief guest at the ceremony, said.

The campaign draws attention to an important healthcare issue in Pakistan as part of the wider global Health Care in Danger (HCiD) initiative addressing the issue of violence against healthcare personnel and services.

Speaking on the occasion, Pakistan Red Crescent Society Chairman Dr Saeed Elahi said many hospitals have been attacked in Pakistan, sometimes by militants and at times by the patients’ attendants. Hospitals, healthcare staff and transport should be spared from violence and must be respected and protected, he said. “Bharosa Karien is a call for all stakeholders, humanitarian organisations, civil society, media and the government to do everything within their stride to protect health and aid workers who are targeted or obstructed as they set out to help the people in need,” Dr Saeed said.

He said the PRCS being a partner of the ICRC in the campaign will engage its volunteers in different parts of the country to sensitise the attendants in hospitals and people from different walks of life to the issue of violence against healthcare personnel and services.

“Violence against healthcare is a humanitarian challenge, which undermines access to and provision of healthcare services and is detrimental to the prevention and eradication of diseases,” Head of ICRC delegation in Pakistan Dragana Kojic said.

Violence against healthcare not only prevents the effective delivery of healthcare services but also poses a threat to the lives of healthcare personnel and patients in need of critical care. The campaign, therefore, aims at raising the general public’s awareness about the need to not interfere with the work of healthcare personnel and to avoid resorting to violence. Many of the incidents healthcare workers face are initiated by the friends and families of patients, so one of the goals is to provide information that will improve family members’ ability to cope with emergencies.