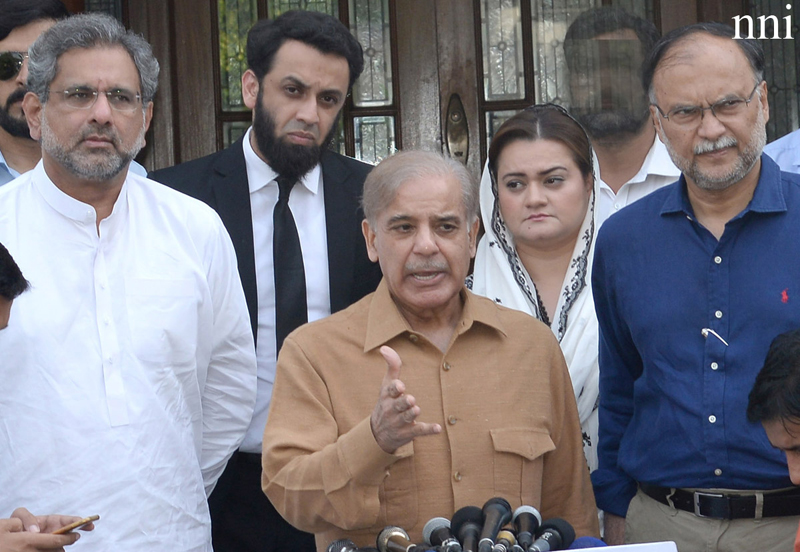 The Pakistan Muslim League-Nawaz (PML-N) on Tuesday called the arrest of its Punjab President Rana Sanaullah an act of “state terrorism”, with Opposition Leader in National Assembly accusing Prime Minister Imran Khan of being the masterminding attacks on opposition.

Talking to the media at his residence in Model Town Lahore after chairing a meeting of the parliamentary working group of the PML-N, which was called to devise a strategy after the arrest of Rana Sanaullah by the Anti-Narcotics Force (ANF), Shehbaz said the premier was the ‘informant’ in the case, who got Sanaullah arrested by leveling false allegation of heroin trafficking against him.

The meeting of parliamentary working group deliberated upon the post-arrest situation, and it was decided that the production order of Rana Sanaullah would also be demanded from the National Assembly speaker for the session.

“The arrest of Rana Sanaullah is the worst kind of cruelty and injustice by Imran Khan Niazi,” said Shehbaz, talking to the media. He further added that Sanaullah worked with him as a law minister for 10 years in Punjab and had ordered conducting numerous raids at the dens of drug peddlers, and now “Niazi” got him arrested by leveling false allegation of selling heroin.

“Niazi is using such tactics against the PML-N because we are standing with the poor in this time of inflation and we raised our voices against the budget that was meant to kill the farmers, traders, students, orphans and widows,” he added. “We all are ready to go to jails if inflation can be controlled through such tactics… We’ll not budge from raising voice for the poor,” Shehbaz said. He also announced that Shahid Khaqan Abbasi and Ahsan Iqbal would be the PML-N’s members for the newly formed Rehbar Committee constituted after the recently held all parties conference (APC) to craft a joint strategy against the government.

When asked whether things had started going against the PML-N when one of his party leaders (Maryam Nawaz) rejected the Charter of Economy while terming it as the ‘Joke of Economy’, Shehbaz said that everyone, including him, was bound to obey the party discipline and there was only one leader in the party – Nawaz Sharif. “The Charter of Economy will be meant only for the people of Pakistan,” he added.

Talking about the PML-N MPAs who recently held a meeting with the prime minister, he said that the notices had been sent to those MPAs and a committee was constituted to ask them about the reasons behind their meetings. “The man who used to give lectures against horse-trading is now himself involved in the same horse-trading,” Shehbaz said.

Speaking on the occasion, Shahid Khaqan Abbasi termed the arrest of Rana Sana as ‘state terrorism’ only to suppress the voice of opposition. He was of the view that harsh words were exchanged between Sanaullah and the ANF officials when his vehicle was intercepted near the Ravi Bridge by the ANF. “Nothing was recovered from him and he was told at the police station through a fabricated story that 15kg narcotics were recovered from him,” Abbasi said. He went on to say that the cases of narcotics and drugs were not lodged against politicians even during dictatorial regimes, but this so-called democratic government has failed miserably, and therefore using such foul tactics against politicians.