* Just like 'The Fault in Our Stars', 'Five Feet Apart' is another teenage romantic-comedy with loads of twists and turns, adventure and sleek romance, friendship and priorities 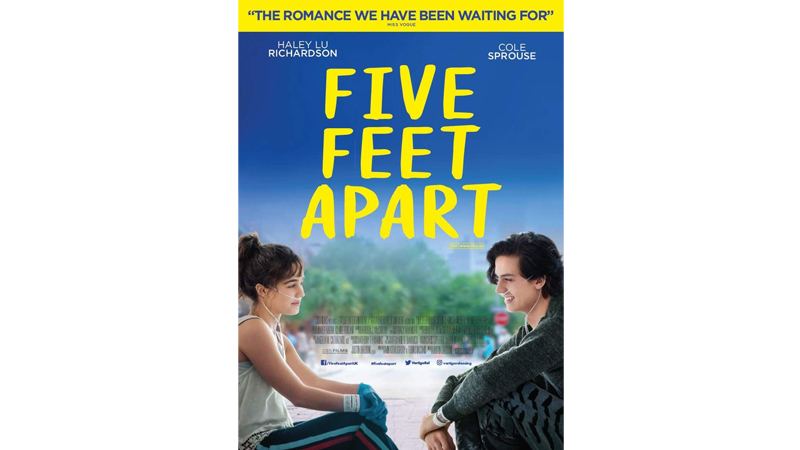 Can you love someone you can never touch? Seventeen-year-old Stella spends most of her time in the hospital as a cystic fibrosis patient, fighting a war between optimism and fear of losing her loved ones.

She is always spreading love and hopes among other patients around her but deep inside, she’s as scared as everybody else.

Just like ‘The Fault in Our Stars’, ‘Five Feet Apart’ is another teenage romantic-comedy with loads of twists and turns, adventure and sleek romance, friendship and priorities. This #1 New York Times bestselling novel was written by Rachael Lippincott initially and is now a major motion picture starring Cole Sprouse and Haley Lu Richardson.

Starting off with a general introduction, the two love birds; Will and Stella are suffering from cystic fibrosis. ‘Five Feet Apart’ revolves around a rule specific to the disease: In order to avoid cross-infection and bacterial contamination, the patients must remain at a six-foot distance. Our optimistic heroine, Stella breaches the rule by decreasing the safe distance by one foot as the movie’s title suggests; five feet apart. She decides to keep a five-feet scale in between to ensure a safe distance between their bodies. It is then she asks the hunky Will, “Are you in?” to which he responds beautifully, “I am so in.” This line stole many hearts and the gif went viral on social media.

Will emerged as a rebellious soul in the start but his encounter with the charity soul, Stella changed his life once and for all. Their attending Nurse Barb allowed two lovers to break the rules in the past who eventually died. Nurse Barb thought held her leniency accountable for their death and thus, thought that she would be damned if she let that happen again. Despite all the odds against them, Stella learned to live freely as long as she can from Will who famously said that:

After Stella and Will are head over heels in love with each other, something strange happens in their lives. That event is a trigger for us, a reminder that life is unpredictable. No matter how hard we try, no matter how long we struggle for something, it just needs a single blow to shatter the whole castle. Our emotions are just like moonstone, reflecting vivid spectrums in every angle, yet the reality is that black hole which can absorb the whole light, abandoning us in the trapdoors of darkness.

Starting off with a general introduction, the two love birds, Will and Stella, are suffering from cystic fibrosis. ‘Five Feet Apart’ revolves around a rule specific to the disease: In order to avoid cross-infection and bacterial contamination, the patients must remain at a six-foot distance. Our optimistic heroine, Stella breaches the rule by decreasing the safe distance by a foot as the film’s title suggests; five feet apart

While this movie depicts “Where there’s will, there’s a way” concept, at the same time it gives you a heart-wrenching punch that reality is going to get dominant one day. You can never live in an illusion for a long time. After Stella develops the tube infection which led to minor surgery, Will became cautious and stopped seeing her until one day rebellious Stella emerges from the nutshell of caution and regularity. Despite the fact that the frequent meetings of Stella and Will can cause them bigger troubles which could be fatal, Stella stepped up against reality by saying:

“This whole time, I’ve been living for my treatments, instead of doing my treatments so that I can live. I want to live.”

Stella finds a pair of lungs for a transplant which was like a dream come true for her parents. They have been waiting for years for this very moment but when the moment finally came, Stella could not do it. She felt it like a betrayal, to watch your loved one, who saved your life a moment ago, die while you live. While Stella was going through her surgery of lungs transplant, the shackles of reality were winding around their hopes and emotions.

The conscious character Will, who was ready to leave Stella for her safety depicted reality, while the unconscious, vulnerable state of Stella who still wanted to be with Will, beautifully illustrated the emotional struggle. When Will said his last goodbye to Stella, she was on the ventilator; unable to speak and move. Only tears rolled down her rosy cheeks as she shook her head in disapproval. Deep inside, she was screaming that she never wants to live without Will, that she loves him and is dying to spend the rest of her life with him; side by side. These final words by Will, as he said his last goodbye to the love of his life reflects his state of impuissance and helplessness as he says:

“You know, people are always saying if you love something, you have to learn to let it go. I thought that was such bullshit, till I watched you almost die. In that moment, Stella, nothing mattered to me, except you. I’m sorry. I don’t want to go. All I want is to be with you. I can’t. I need you to be safe, from me. I don’t know what comes next, but I don’t regret any of this. Could you close your eyes? I just don’t know if I can walk away if you’re still looking at me. Please. I love you so much.”

Emotions are those packets of complexities that create a series of problems in our life. If we pop-open the packet, there will be only a mess. A mess of shattered hopes, dreams and expectations. We all have these packets in our heart but we should know that reality can pop it open at any instant.

The end of the film is quite sad, yet ambiguous as Stella pleads to the world in her live broadcast that:

“Human touch. Our first form of communication. Safety, security, comfort, all in the gentle caress of a finger. Or the brush of lips on a soft cheek. It connects us when we’re happy, bolsters us in times of fear, and excites us in times of passion and love. We need that touch from the one we love, almost as much as we need air to breathe. But I never understood the importance of touch. His touch. Until I couldn’t have it. So if you’re watching this, and you’re able, touch him. Touch her. Life’s too short to waste a second.”

The writer is a blogger, researcher, freelancer and a social worker. She’s currently a student of Bachelors at Air University and can be reached at kyxy220@gmail.com