Faryal Talpur to remain in NAB custody for nine days 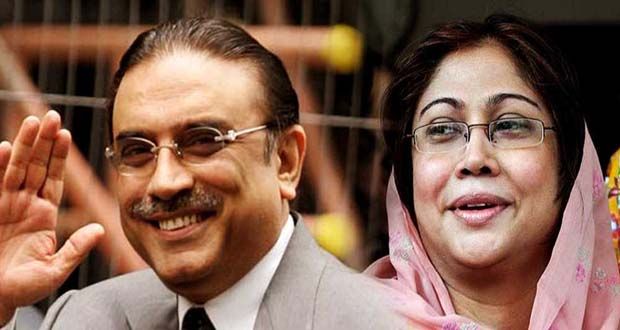 The NAB did not shift the sister of former president and PPP supremo Asif Ali Zardari to their offices but kept her under custody at the Zardari House, which has been declared a sub-jail for the purpose.

A five-member NAB team, including female investigators, is at the Zardari House, Islamabad, which was notified as a sub-jail by the NAB chairman under the NAO, 1999.

NAB officials summoned a team of doctors at the sub-jail to conduct Talpur’s medical examination. The bureau is expected to present Talpur in an accountability court on Saturday to seek her physical remand.

According to reports, an arrest warrant for Faryal Talpur signed by NAB Chairman Justice (r) Javed Iqbal was handed over to NAB Rawalpindi three days ago, following which NAB Rawalpindi constituted a team to arrest the PPP leader.

The arrest comes days after PPP Co-chairman Asif Zardari was arrested on Monday after cancellation of his and Talpur’s pre-arrest bail by the Islamabad High Court in the fake bank accounts case. In its orders, the high court allowed the NAB to arrest Zardari and Talpur, both of whom now have the option to appeal the order in the Supreme Court.

The NAB is investigating four cases wherein the former president and his sister are the prime accused. The cases pertain to transactions worth hundreds of millions of rupees to the two leaders’ private companies, allegedly through fake bank accounts.

PPP Chairman Bilawal Bhutto Zardari, at a press conference following the arrest, accused the government of ‘using blackmail and pressure to run institutions, of which NAB is only one example’. He claimed that his father and aunts’ arrests were announced on dates that a budget and Pakistan Economic Survey were to be presented so that people’s attention is diverted away from the government’s economic terrorism.

He alleged that the government knows they don’t have a majority and their government can fall at any time, that’s why they have targeted the opposition. “If they pass the budget this way, without issuing production orders for all MNAs, it is rigging,” he said.