Bilawal Bhutto and the parliament

The state of Pakistan is passing through a transitional phase. The entire national situation is quite desperate. Economic deterioration, increasing ethnic nationalism, popular dissent against government’s policies, the precarious security situation and the political instability have impacted the affairs of the state in myriad ways. The rise of Pashtun nationalism in the form of the Pashtun Tahaffuz Movement, the involvement of the establishment in mainstream politics and support to the Pakistan Tehreek-i-Insaf, the upsurge in National Accountability Bureau’s actions against opposition parties, allegations of bias against the judiciary, persistent threats to parliament, 18thAmendment, democracy and constitution, censorship and self-censorship in news media, a shift in the anti-establishment narrative of the Pakistan Muslim League-Nawaz and Maryam Nawaz’s focus on social media and Bilawal Bhutto’s unstinting support for democracy are important features of the national politics today.

Recently, contrary to his electoral manifesto, Prime Minister Imran Khan has asked the International Monitory Fund for a loan to bolster national economy. The prime minister has said the government had no choice but to accept some strict conditions. 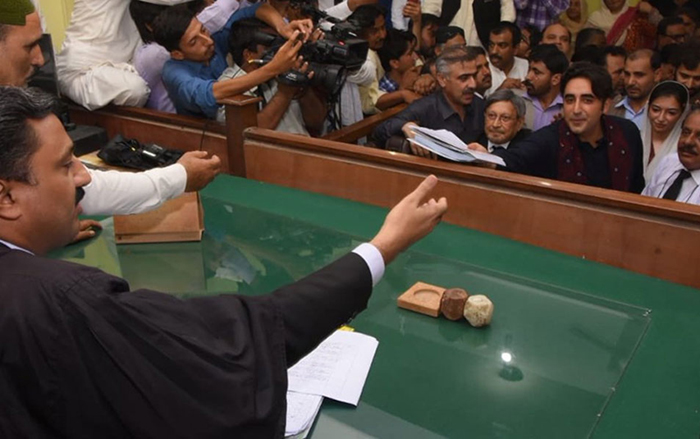 The parliament has a fight at its hands to defend its supremacy among national institutions and rule of the 1973 Constitution. The 18th Amendment is being assailed by Prime Minister Imran’s Khan government, which is calling it the root cause of crises and chaos. The establishment is looking to restore Article 58-2(b) in order to strengthen the office of the president vis-à-vis the prime minister and the parliament. Former president Asif Ali Zardari and his Pakistan Peoples Party have the credit for restoring most of the 1973 Constitution to its original form. The annulment of Article 58-2(b) has been a gret achievement.

Meanwhile, Pakistan Muslim League-Nawaz, the largest opposition party in the National Assembly appears to have moved away from Nawaz Sharif’s anti-establishment narrative. The former prime minister accuses the establishment of interference in judicial and political affairs, using the National Accountability Bureau to victimize politicians and seeking control over foreign policy. The narrative gained the former prime minister popular support but division within the party, Sharif’s imprisonment and the rising clout of pro-establishment players in the party have weakened it. The challenge to Nawaz’s position is led by his brother Shahbaz Sharif, and the latter’s like-minded colleagues.

Bilawal Bhutto has meanwhile supported Nawaz Sharif’s narrative and emerged as the leading advocate of civilian supremacy in the country. His bold stance has helped the Pakistan Peoples Party regain credibility and restore its image and prestige in Pakistani politics. The iftar gathering he hosted recently in Islamabad for leaders of opposition parties has highlighted his role on the political scene.

His support for the PTM’s five-point charter of demands is also significant. The PTM is asking for protection of Pashtun people’s rights. Bilawal has categorically stated that the PTM demands are constitutional and democratic. He remains the only prominent leader of a mainstream political party leader to have courageously supported the PTM’s demands and asked the government and the establishment to listen to the Pashtuns. Most of the grievances stem from the aftermath of post 9/11 military operations in Tribal Areas. He has expressed his reservations on violations of human rights in the Pashtun belt; missing persons; and unlawful detention of Pashtun activists.

Bilawal Bhutto’s opposition to extending the term of military courts is very clear. His stance on military courts and banned outfits is coherent and logical. He has also stated that the PPP shall not support any move that would favour the extension of military courts. He has called the practice unconstitutional. The PML-N, however, has appeared indecisive on the issue. Shahbaz Sharif’s soft corner for the establishment is a prominent factor in PML-N’s ambiguous position on military courts.

Bilawal’s position on banned ‘religious’ outfits and criticism of government’s soft corner for extremist groups is very exciting. He has identified these groups as a threat to national security and stability. It is clear that official support to banned groups has caused Pakistan great embarrassment globally and harmed its image. The UN Security Council has recently passed a resolution declaring Pakistani citizen Masood Azhar a global terrorist. It is still not clear that Pakistan has learned the right lessons from the humiliating episode.

While crises seem to have shaken the state of Pakistan to the core, Bilawal has emerged as a beacon of hope for democracy, constitutionalism and rule of law. Pakistan needs more leaders like Bilawal to restore political stability, ethnic harmony and a sovereign parliament.