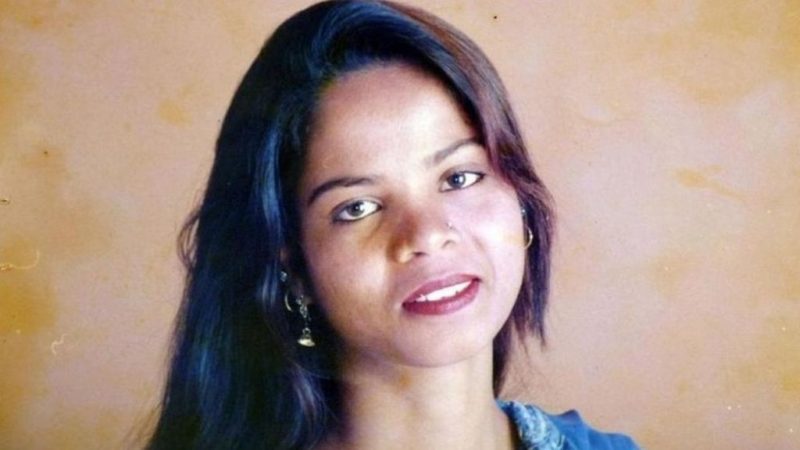 Asia Bibi, the Christian woman who spent eight years on a death row over false blasphemy charges, has left the country, her lawyer and the media said on Wednesday, more than six months after she was acquitted by the Supreme Court.

“I have inquired within available channels, and according to them she has left for Canada,” Asia’s lawyer Saiful Malook told an international news wire.

Two news channels, citing undisclosed sources, also reported that she had left the country. The Foreign Ministry did not respond to requests for comment.

Meanwhile, another international news wire reported that Wilson Chawdhry of the British Pakistani Christian Association had received a text message from a British diplomat saying “Asia is out”. A close friend of hers also confirmed that she had left the country, speaking on condition of anonymity for fear of reprisal.

The friend, who last spoke to her on Tuesday, said Asia and her husband Ashiq Masih had spent the last several weeks getting their documents in order. He said she was longing to see her daughters, with whom she talked to almost daily from her secured location, protected by the security forces.

Chawdhry said he had been in regular contact with Ashiq Masih throughout the ordeal as well as with several diplomats as part of an international effort to have her freed.

Asia’s release in October sparked rioting by hardline groups, who rejected the Supreme Court’s verdict and warned Prime Minister Imran Khan’s government that she must not be allowed to leave the country.

They also called for Asia, who has been staying at an undisclosed location under tight security, to be killed. In November, Canadian Prime Minister Justin Trudeau said his country was in talks with Pakistan about helping Asia.

Asia, a farm worker and a mother of four, was convicted in 2010 of making derogatory remarks about Islam after neighbours working in the fields with her objected to her drinking water from their glass because she was not a Muslim.

Her case has outraged Christians worldwide and been a source of division within Pakistan, where two politicians who sought to help her were assassinated, including former Punjab governor Salman Taseer, who was shot by his own bodyguard.

“It is a great relief that this shameful ordeal has finally come to an end and Asia Bibi and her family are safe,” said Omar Waraich, deputy South Asia director at Amnesty International.

“She should never have been imprisoned in the first place, let alone endure the constant threats to her life. This case horrifyingly illustrates the dangers of the country’s blasphemy laws and the urgent need to repeal them.”