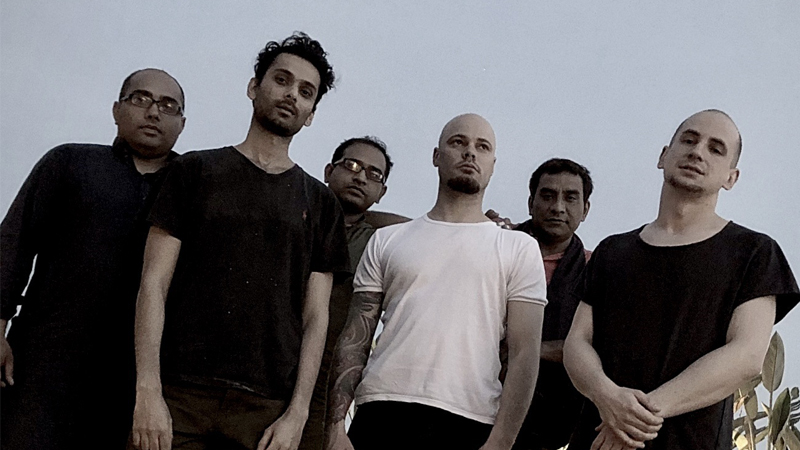 Jaubi, the name which literally means “whatever” in Urdu is a true representation of the band’s philosophy of music.

Jaubi features four Pakistani musicians which include Ali Riaz Baqar who plays the guitar, The Gibson ES 335. The tabla and sarangi are played by Kashif Ali Dhani and Zohaib Hassan Khan respectively and Qamar “Vicky” Abbas on the drums. The camaraderie of the band is what makes this band a success. Jaubi finds joy in music and it reflects in their music and performances.

Jaubi’s most recent performance was at Riot Studios arranged by Uzma Rao of Native Rock. The quartet collaborated with Edward “Tenderlonious” Cawthorne who plays the flute, soprano saxophone and clave along with Marek P?dziwiatr whose forte is the keyboard and Minimoog Voyager.

The quartet collaborated with Edward “Tenderlonious” Cawthorne who plays the flute, soprano saxophone and clave along with Marek whose forte is the keyboard and Minimoog Voyager

The exclusive performance was attended by musicians and enthusiasts from diverse backgrounds including musicians Aima Baig and Farhad Humayun.

On performing at Riot Studios band member Ali Riaz said, “We were rehearsing and recording parts of our debut album during the previous six days at Farhad Humayun’s Riot Studios, so performing a show there on our seventh day was relaxing and nothing new. The show was skilfully organised by Uzma Rao who did an amazing job of inviting people, setting the ambience and hosting the show. Kudos to the both of them!”

On the response of the audience , Ali further added, “During the show, seeing the audience respond after hearing an amalgamation of musicians from not only a Jazz, Hip Hop or North Indian Classical music background but also an international background was beautiful. Seeing certain people enter a trance like groove when we were playing was humbling. We got a chance to socialise with the crowd at the after party and it was great talking to people in Lahore with an appreciation for instrumental and jazz music.”

Jaubi’s musical genre ranges from Indian classical to jazz infusing rhythms from across the world to create music for global audiences. Critically acclaimed for their musical prowess and talent, the band has performed for limited audiences locally and internationally. Jaubhi has been invited to perform in Norway by Khalid Salimi.

The band has released several EPs in the past and the compositions are available online. Jaubi plans to reach out to wider audiences and plan on releasing more compositions in the near future.