Forced conversions are an organized crime

Tharparkar district in Sindh has seen some of the most heart rending misery that can befall a people. From famines and droughts to endemic malnutrition and epidemic disease, it has seen it all. Hundreds of lives are lost every year, many on account of poor planning. 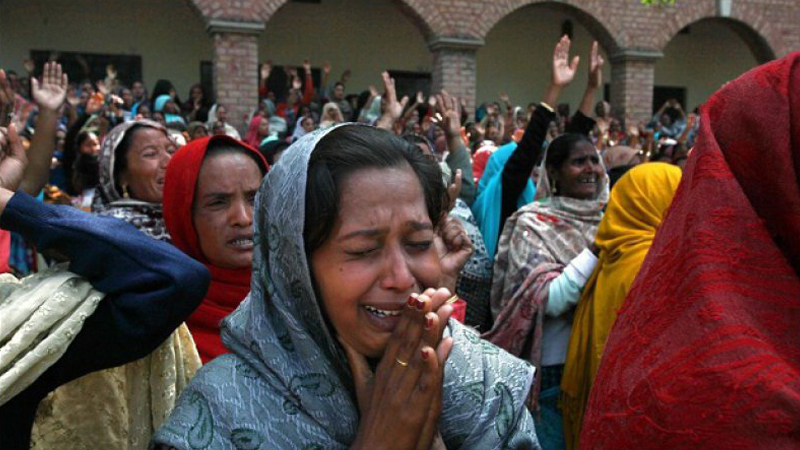 Add to this list of misfortunes a burgeoning trend of forced conversions which often come coupled with under-age marriages. The record shows that forced conversions are not a novelty in the area. Abductions of poor Hindu girls forced into converting to Islam and recording statements absolving their tormentors have been reported for several years now. Investigative accounts have revealed an upsetting repetition in the practice. Over time the practice has taken the form and regularity of an organized crime. Paradoxical as it might seem, such occurrences are both episodic and repetitive; episodic in terms of their frequency and repetitive in terms of their conduct.

Given the background, the recent case of two Hindu girls allegedly forced to convert to Islam that coincided with the celebration of Holi, while tragic, comes as no shock. However, it does raise numerous questions about the role and efficiency of State, particularly the provincial authorities, in protecting the minority communities. The case came to the attention of most people with the circulation of two videos over social media. In the videos, two girls, later identified as Reena and Raveena, aged 14 and 16, respectively, were seen sitting next to two men and a bearded cleric. A similar case was reported in 2017. It involved a 16-year-old named Ravita Meghwar. She was reported to have converted to Islam, given a new name, Gulnaz Shah, and married to a Muslim. Her family, however, alleged abduction, forced conversion and marriage under duress.

The Jamaat-ud-Dawa saw the bill as an impediment in the way of people ‘entering the fold of Islam’ and hence totally unacceptable. The Jamaat-i-Islami argued that there could be no age requirement for people converting to Islam. An added dimension in the criticism was the allegation that the bill was ‘blasphemous’

Poverty has been a recurrent theme in the conversions over the past few years. Most of the girls involved have been from low-income families. According to the National Commission for Justice and Peace, around 1,000 Christian and Hindu women were converted to Islam and then forcibly married to their abductors or rapists.

In Sindh, the complaints are not limited to Tharparker. Similar cases have been reported regularly from Mirpur Khas and Umerkot. A Human Rights Commission of Pakistan report states that over 1,000 non-Muslim girls are forcibly converted to Islam every year. Reports by certain researchers and NGOs quote a much higher figure for such conversions. The provincial government is regularly accused of failing to do enough to prevent such incidents. In the few cases where the authorities have taken an initiative, their efforts to thwart such occurrences have been met by extremist backlash.

The lawmakers did pass a bill in 2016. It outlawed forced conversions and disallowed conversions before the age of 18. However, it was soon attacked by several religious groups. The Jamaat-ud-Dawa saw the bill as an impediment in the way of people ‘entering the fold of Islam’ and hence totally unacceptable. The Jamaat-i-Islami, too, argued that there could be no age requirement for people converting to Islam. An added dimension in the criticism was the allegation that the bill was ‘blasphemous’ and therefore not competent legislation. Over the years, such groups have resorted to citing the sharia related clauses in the Constitution to prevent or delay any legislation which opposes their interpretation(s) of Islam. An utter disregard has been shown to the consideration that forcing the weak and the destitute to convert to one’s faith does nothing but reduce the essence of faith itself.

Pakistan has signed and ratified the International Covenant on Civil and Political Rights. It has also ratified the Convention on the Elimination of Discrimination Against Women, of which Article 16 confirms the right of every woman to enter into marriage ‘only with their free and full consent’. Pakistan has also ratified the Child Rights Convention, of which Article 14, Section 1, states that state parties need to respect the right of children to freedom of thought, conscience and religion.

The federal government needs to realise that the task of protecting the minorities in Sindh requires the passage of the bill repealed two years ago as a consequence of backlash from Islamist parties. In the absence of a law explicitly banning forced conversions, there is not much activists and lawyers can do to improve the situation.

The writer works at the Centre for Strategic and Contemporary Research, Islamabad