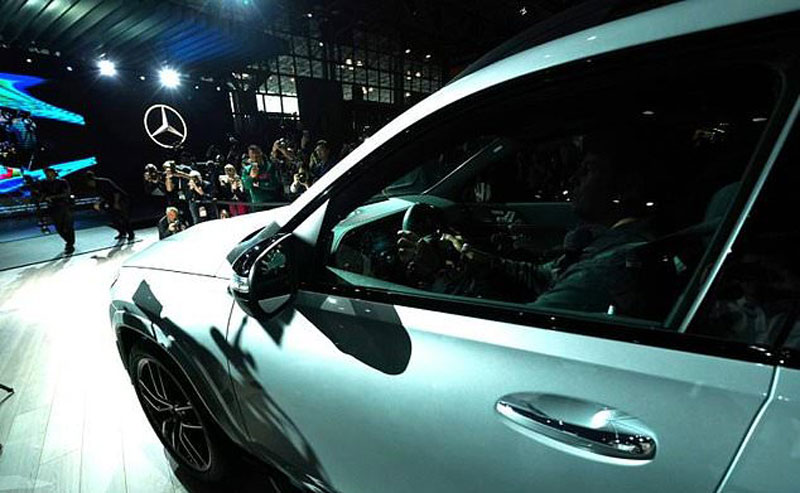 US auto sales may be slowing, but carmakers have high hopes for luxury vehicles, which are imbued with increasingly sophisticated gadgetry and sex appeal to seduce a new generation of millionaires.

Luxury car companies brought their “A” game to the New York International Auto Show, which opened Friday with a mix of new models, some featuring envelope-pushing technology and others pitched as green vehicles, to grab attention of new customers who grew up with technology and are sensitive to climate change.

In both cases, these are luxury models with price tags to match.

Mercedes-Benz’ new generation of sport-utility vehicles has voice command and answers to “Hey Mercedes” as its artificial intelligence programs adapt to its user’s habits.

That feature brings to life something like the experience from the 1980s hit television show “Knight Rider” when David Hasselhoff’s character addressed his vehicle as “KITT.”

“It’s much more convenient. The cars can read your emails or texts and you don’t need to take your hands from the steering wheel,” he added. “It’s safer. You don’t look down and try to find something, you can just say it and you control it.”

Although many millennials still face heavy college loans, the US economy is also churning out adults who make seven figures and up who were born in the 1980s and 90s. So far this month, there have been successful initial public offerings by tech companies Lyft, Pinterest and Zoom, all led by (now-rich) millennials. And more youth-led ventures are expected to go public soon, including Uber.

Eyeing this rarified niche population, the Italian company Pininfarina stands out. The company introduced its “Battista” electric, zero-emission vehicle at an art gallery in Chelsea, the trendy Manhattan district.

The sleek vehicle has 1,900 horse power and can sprint to 60 miles per hour in less than two seconds. The price? $2.27 million!

A future prospect in this ultra-expensive, ultra-environmentally friendly category is the Genesis Mint, which was shown as a concept car by Hyundai.

“The wealthy clients want just the best of the best,” said Brian Miller, a New York dealer for luxury brands, including Rolls Royce, Ferrari and Bugatti, whose latest offering is the ultra-powerful Chiron sports car.

Porsche’s 911 Speedster, which also boasts dynamic drive, plays on the lure of exclusivity. Fewer than 2,000 versions of the car will be produced worldwide.

Sales for the German luxury carmaker rose 7.5 percent in the first quarter of 2019 even as the overall market sagged.

“It’s absolutely healthy and things are very positive for us,” a Porsche spokesperson said. “Our sales are growing.” And Nissan plans to produce just 50 of its GT-R 50, the car used in the action film saga, “The Fast and the Furious.”

All the materials on the car are authentic. “If it looks like carbon, it is carbon. It’s the real deal; it’s not synthetic.”

“All three dimensions are becoming more and more important for the overall driver experience,” he said. “It’s about the whole package.”

In 2018, sales of luxury cars dipped 0.3 percent to just over 2 million in the United States, a contrast to the 0.6 percent gain in overall US sales. But some experts think that trend will reverse in 2019, with the richest Americans seen as the biggest winners of US tax cuts signed into law in 2017 by President Donald Trump.