* The writer includes an account of his attempt to ride the race which is engaging, witty, informative and deeply honest 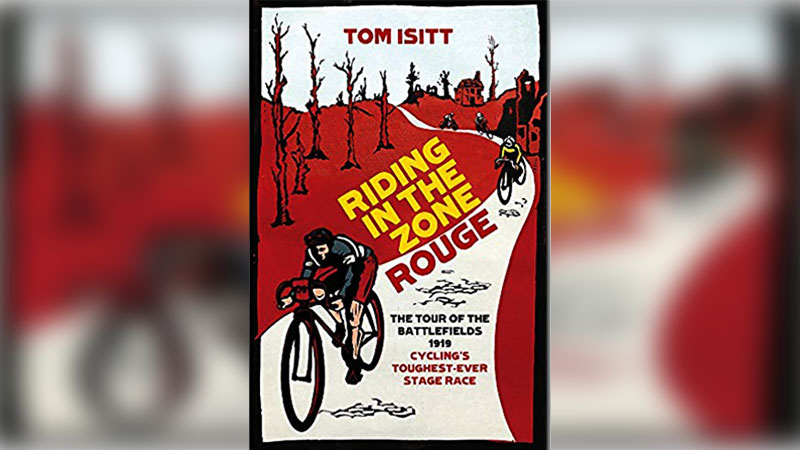 All great cycling books are bonkers. There is the delusion in It’s Not About the Bike, the Lance Armstrong autobiography that omitted that slightly significant detail of him taking more drugs than Keith Richards. There is the single-minded descent into shame and loss of David Millar’s Racing Through the Dark, and there is the obsession of Richard Moore’s In Search of Robert Millar that has the coda that the erstwhile King of the Mountains has now transitioned to living as Philippa York. It therefore follows that all good cycling books should be, well, at least eccentric. Saddle up, Tom Isitt. He rides in with the perfect fit for the genre. A fiftysomething amateur but keen cyclist, Isitt has written his first book and it is worthy and sometimes daft, occasionally funny and regularly poignant, brilliantly focused in its research and often meandering in its execution.

Its subject is the Circuit des Champs de Bataille in 1919. This race was designed to traverse the battlefields of the recently ended First World War. It covered more than 2000 kilometres in seven stages with riders ploughing through rudimentary roads, falling into shell craters, nudging inch by inch up mountains decked in snow and all on machines that were heavy, unreliable and punctured more readily than Piers Morgan’s ego.

This being a cycling book, Isitt adds his own brand of bonkerdom. He includes an account of his attempt to ride the race: engaging, witty and informative and deeply honest in that he admits he occasionally took the train. He conjures up an imaginary account of meetings between competitors: ill-advised and rarely successful. He details the race and its riders: brilliant and informative. And he throws in personal musings: tedious on the failings of sat nav but often extraordinary on the scenes of battle and the effects they can induce.

The Zone Rouge was an area designated by the French government as so badly damaged by gas and shells that it would never be fit for cultivation or human habitation. Starting and ending in Strasbourg, the race careered – sometimes plodded – through Alsace, Lorraine, Luxembourg, Belgium and France. More than 80 riders started and about half of them finished. One rider took 39 hours to complete one stage.

They were an interesting crew. They included the irascible Henri Pelissier, whose wife shot herself and whose mistress subsequently shot him with the same gun. There were soldiers returning to the sport after awful times and there was Charles Deruyter of Belgium who won the race in 85 hours and one minute.

Like all professional cyclists, they would provide – if studied – ample material for a generation of psychiatrists to ponder over in the search for both obsession and meaning. The race, sponsored by a newspaper, offered good prize money but it promised pain. The seasoned veterans shook their heads at the dangerous road conditions, the dreadful weather and the day’s riding that averaged out at 300 kilometres, about 190 miles in Brexit currency.

The Zone Rouge was an area designated by the French government as so badly damaged by gas and shells that it would never be fit for cultivation or human habitation. Starting and ending in Strasbourg, the race careered — sometimes plodded through Alsace, Lorraine, Luxembourg, Belgium and France

All this was through country that was destroyed by war and reeked of death. As the Michelin guidebook of that year put it: “Thousands of shells, shell casings rifles and machine guns lie scattered about. Corpses are occasionally seen.”

The competitors, of course, brought the culture of the cyclist. They carried spare tyres around their necks, did their own repairs and were fortified by a selection of substances. Isitt points out that this was an era where cyclists took so many drugs that on one occasion a stage winner could not stand unaided. He also details the ingredients of the Pot Belge, an interesting concoction to sustain the cyclist: alcohol, cocaine, caffeine, amphetamines, heroin and analgesics with sometimes the merest soupcon of strychnine.

It is not clear precisely what the Zone Rouge competitors took but it would be a harsh judge who denied them anything of consolation. The race was brutal and never resurrected after its singular staging in 1919.

Isitt, though, replicated parts of it more than 100 years later. His attempts at authenticity were rendered impossible as some of the roads no longer exist. He compounded this, wavering from the one true road by occasionally taking a more scenic route, jumping a train or deciding that enough, just sometimes, can be enough.

This is not to question Isitt’s credentials as the routinely bonkers cyclist. At 55, he insists that 70 miles a day on a bike is very easy, cycles on after cracking ribs and fixes his gears with the sort of enterprise that could only have been learned from 1960s Blue Peter; I swear there was one moment he was going to mend his handlebars with the aid of sticky-backed plastic and an empty bottle of Fairy liquid. But that might just be me and the Pot Belge.

But Isitt is undoubtedly a character. His drive, wit and curiosity inform Zone Rouge. He admits, too: “I also have an alarming disregard for my own safety and well-being, a misplaced sense of invulnerability and a liking for an adrenalin rush.”

This confession comes at a particularly sombre time when Isitt is cycling through a battlefield and ponders what made his grandfather and great uncle volunteer and serve on the killing fields of 1914-18. Chirpy with waiters and waitresses, mischievous with the contents of a breakfast buffet, Isitt is gently profound and genuinely moving when considering the battles, the fallen and the graves that lie over acres of the Zone Rouge and beyond.

“My heart raced and I felt a strange sense of urgency and dread,” reports Isitt as he ventures on to the battlefield of the Somme on a beautiful May morning. On July 1, 1916, 100,000 British and allied troops went over the top. By nightfall, 60,000 of them had been killed or seriously wounded. The carnage continued for 141 days, inflicting more than one million casualties.

This was the story in the Zone Rouge where towns and cities were razed, civilians executed and soldiers obliterated to such an extent that they can only be listed as missing more than a century on.

There is the fun and obsession of cycling at the heart of this book. But there is a recognition, too, that its excesses are largely innocuous and can be life-enhancing. Malevolent madness, on the contrary, is the preserve of wider mankind and continues to colour the world with Zones Rouges.