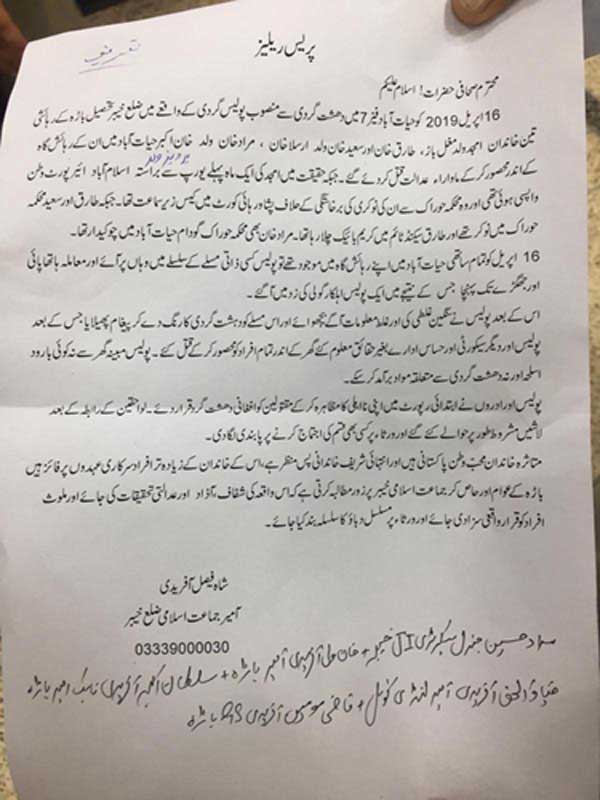 Speaking at a press conference, Faisal said all the people killed in the Hayatabad operation belonged to Bara tehsil of Khyber district.

According to Faisal, Amjid had just returned to Pakistan from Europe a month ago and was pursuing a legal case in the Peshawar High Court regarding his job, as he was a government employee in the Food Department.

“The issue started from a personal dispute that took the life of a policeman,” he claimed. “Following the personal dispute, the police created a wrong perception and termed it a terrorist activity, and on wrong information other security and law enforcement agencies carried out this fake encounter and killed all those citizens ,” he added.

He also claimed that no weapon or explosive material was recovered from the house during the raid.

Criticising the initial report issued by the KP Police, he said, “It was the failure of police and other law enforcement agencies that in their initial report they declared the innocent citizens ‘Afghan terrorists’.”

Talking to Daily Times, Faisal said, “The authorities had set many conditions for handing over the bodies, but the important one was to stay silent on the issue.”

He demanded a truth commission on the issue and asked the authorities to stop pressurising the families of those killed.

On the other hand, the police in a report said, “On the night of April 15, the Counter Terrorism Department and security forces received information that some terrorists were hiding in a house located in Hayatabad Phase 7, where they were planning terror attacks in Pakistan.”

Many residents of KP and newly merged tribal districts relate this episode to Rao Anwar’s fake encounter of Naqeebullah Mehsud.