All provinces of Pakistan have their own cultural significance and uniqueness. Similarly, the handicrafts of Balochistan draw in the most admiration and popularity. These handicrafts which are rendered by females mostly are known all over the world for their beauty, their designs, their uniqueness and their colours.

The handicraft skills of the Balochistan are ancestral which have been passed from one generation to the other. These art pieces are created by the womenfolk. They do not have to go out of their houses for work. They attend to do their household works and in the sphere time, they produce handicrafts which adds to their family income.

Moreover, it is believed that the art originated from Mehrgarh civilisation back in 700BC. Mehrgarh is located near the Bolan Pass to the west Indus Valley and between Quetta, Kalat and Sibi. It’s one of the oldest civilisations in Pakistan. It is estimated that some patterns were excavated from Mehrgarh site in Balochistan.

Different regions of Balochistan have their own distinct designs indicating relevance to the particular tribe. For instance, the Kalat district is known for Kalati embroideries, Kowchik is a famous embroidery form of Dera Bughti, Moshamka is a beautiful handicraft of Khuzdar whereas Periwaal, Jalar, Naal and Kapuk are the products of Makran division.

Furthermore, needle work in Baloch demonstrates different designs and embroideries. The embroideries are designed on pushk (Shirt) covering the front of the dress. The pushk (shirt) is loose and round. Sleeves are also embroideries which are long and loose trapped at the waist. A loose fitting Shalwar of matching colour is worn with the shirt (Pushk). The Shalwar is gathered at the waist and trapped at the ankles.

It is believed that this art originated from the Mehrgarh civilisation back in 700BC. Mehrgarh is located near the Bolan Pass to the west Indus Valley and between Quetta, Kalat and Sibi. It’s one of the oldest civilisations in Pakistan

Probably, the most striking feature of a woman’s dressing is a rectangular-shaped large pocket extending from the waist to the hern of the dress. Another major and traditional sign of a Baloch is designed scarf culturally known as (Goshaan or Sareeg).

No doubt, most Baloch women today wear bright plastic sandals, but the authenticity of the traditional shoes beautifully made from the date or dwarf palm leaves, is matchless. With the passage of time Baloch females’ dressing styles have become more fashionable and trendies. Even though, they are worn by number of celebrities across the globe.

Although, Baloch men’s clothes are less colourful, but are characterised by especial features that immediately identify the wearer as Baloch, even in the mass. The men’s shalwar kameez consists of a very baggy shalwar or Gher-wallah shalwar, which uses large length of the clothes. The kameez is also loose which is traditionally long with long sleeves. The Balochi shalwar kameez is similiar to the styles worn in Afghanistan. 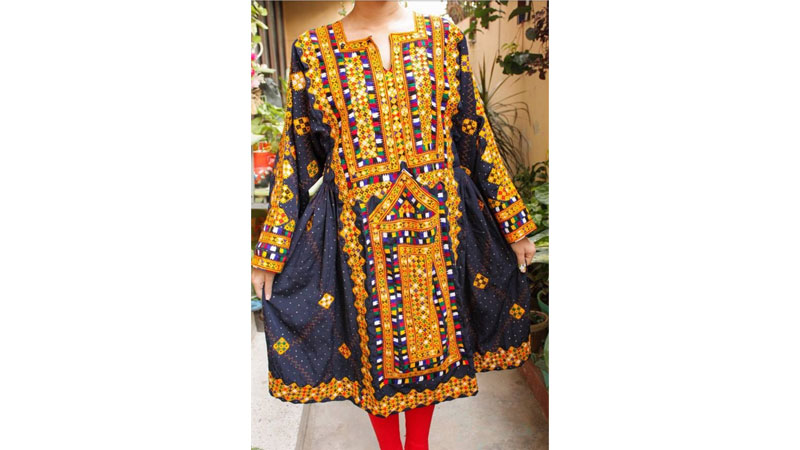 The present Balochi shalwar kameez replaced the earlier version which consists of a robe to the ankles and a shalwar using cloth of upto 40 yards. Along with the Shalwar kameez, Balochi men also wear a turban or paagh. Probably, the most spectacular of the turbans worn in Pakistan is the one worn by Baloch Sardars.

It consists of spotless white cotton wrapped around the head in a manner that only a Baloch can figure out and handle. The turban tail is also used to cover one’s face during dusty storms.

The Balochi shoes along with the turbans on head make the men more graceful in the weddings. The shawl or waist-coat is also a part of Baloch culture and usually they are worn in wedding ceremonies. The dressing styles and outfits of Baloch are the most unique and majestic dressing styles throughout the world.

These dressing styles should be promoted with the same pride the outfits of the rest of the provinces are. Hopefully, the Balochi style of dressing will continue to serve as a distinct form of dressing in the coming decades as well. The authenticity of this dressing style shall be transferred to its ascent generations too.