Don’t fret, Mr PM. We are not here to oust you!

* PPP chairman says people have drowned in the tsunami of poverty and inflation
* PPP will never compromise on people's rights: Bilawal 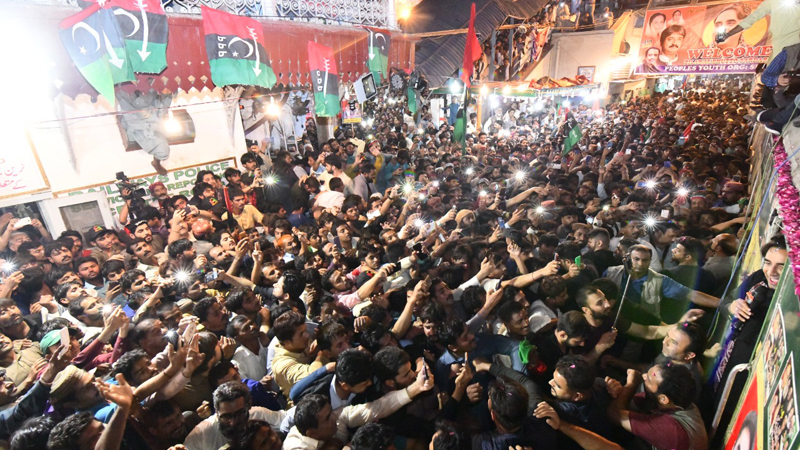 Pakistan People’s Party (PPP) Chairman Bilawal Bhutto Zardari has said that he is hearing cries coming directly from the Prime Minister’s House, but “selected” Prime Minister Imran Khan should be rest assured that no initiative will be taken for toppling his government.

Bilawal said this on the second day of his Caravan-i-Bhutto – a train “march” that he has started from Karachi to Larkana “to attend Zulfikar Ali Bhutto’s 40th death anniversary” at Garhi Khuda Bakhsh. “This is not a train march. The day when the PPP gives a call for a long march or a train match, the rulers will know the difference between sit-in politics and real politics,” he said.

He said certain forces believed that they would eliminate the PPP and the ideology of its founder Zulfikar Ali Bhutto after ensuring his judicial murder, “but they could not”. While criticizing the PTI’s incumbent federal government, he said the selected PM had rigged the people’s mandate and soon after he took oath as the country’s premier, he started depriving Sindh of its due share of water and gas. The PM used to call everyone a thief, but he himself robbed Sindh’s Rs 120 billion, he said, and added that that huge sum was taxpayers’ money. “It is very unfortunate that the politics of the selected PM revolves around the National Accountability Bureau (NAB),” he said, adding that when he started speaking for the rights of the people, the federal government launches a crackdown through the NAB. The rulers should keep in mind that the atrocities would bounce back, he said.

Bilawal said the accountability process should continue, but the people won’t accept political victimisation in the guise of accountability. He said the NAB was formulated for political engineering, and hence it should now cease to exist. “There is a dire need for a new NAB, which should treat everyone with justice, and that should not prioritise Lahore over Larkana. That new NAB should be fittest one to treat a judge, a general and a politician in the same manner,” he said, recalling that the accountability commission was wrapped up after it started the process of the accountability in Khyber Pakhtunkhwa.

The PPP chairman said he wanted to know when the NAB would start accountability of the “Benaami” PM and his sister Aleema Khanum. Being sarcastic, he said Aleema should lend her “magical” sewing machines to the poor people of Sindh so that they could also earn enough money to buy properties in New Jersey, just like her.

He said all claims of Imran Khan proved to be false, wondering when he would see those 5 million homes and 10 million jobs. “The people have drowned in the tsunami of poverty and inflation,” he said, adding that the selected government was adding fuel to fire.

He congratulated former prime minister Nawaz Sharif for obtaining bail on medical grounds and offered him to come to Sindh for better healthcare at the National Institute of Cardiovascular Diseases (NICVD), and added that the people of Sindh would serve him well.

Meanwhile, Bilawal continued his Caravan-i-Bhutto as he reached Rohri Railway Station, which was overflowing with his supporters. He was received by PPP leaders Syed Khursheed Ahmed Shah, Syed Owais Shah and Syed Nasir Shah. The second day of the caravan kicked off from Nawabshah earlier on Wednesday and turned out to be a very long journey due to the presence of scores of supporters throughout the way.

PPP leadership and supporters now travel towards the final destination, Larkana. In addition to having over 10 scheduled stops on the way, Bhutto’s journey saw people lining up alongside the tracks even where the train wasn’t scheduled to stop. One would think the heat, the time, the cramped quarters would take a toll on the travelers but the palpable energy and the passion emanating from the jiyalas served to recharge them again and again. A journey that would ordinarily take four hours took over 15 hours to complete. The PPP chairman has reportedly addressed the public around a dozen times so far.

Bilawal Bhutto Zardari thanked the people and party workers on his warm welcome and said he was the son of Benazir Bhutto and grandson of Zulfikar Ali Bhutto, so he would never compromise on people’s rights.

He said there would be a gigantic assembly of the people at Garhi Khuda Bakhsh, and urged the people to attend the event. Upon his arrival at Daur, Padidan and Mehrabpur, locals flooded the railway stations to give him a warm welcome and have a glimpse of their leader. In addition, party workers also thronged the railway stations to welcome their leader.