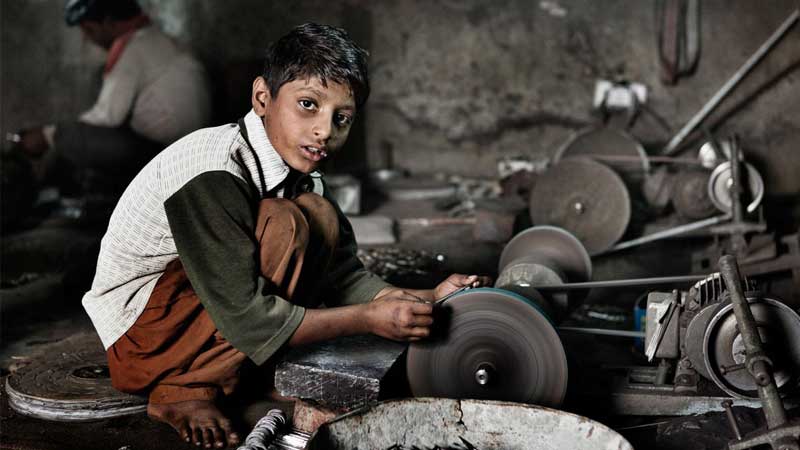 It was almost 12am when Munaj heard someone’s cries outside his home. He was dumbstruck and went to look who that person was. When he came out, he saw Ali, the stepson of his neighbour Sadiq, begging with both his both hands for help. Munaj took him inside and gave him some food to eat.

A few days earlier, Munaj was on his way to work, when he saw Sadiq beating Ali very badly. He managed to get Ali free from Sadiq’s grasp and scolded Sadiq for this.

The scene appeared before Ali’s eyes like a flashback.

“Sir, it was a hard day for me. I had worked continuously for 15 hours at different workshops that day and got free at 11:30pm. I was very tired and did not have enough money to even have my dinner,” Ali cried.

He stopped for a brief second and began crying again. Munaj tried to console him and offered a few words to relax him.

“Sir, I’m only 10. What should I do? My boss gives me very little money and when I ask him to increase my salary, he beats me like my stepfather does. When I come home, my stepfather alleges that I get a lot of money but I hide it from him and…,” tears began pouring down his cheeks.

“It has been written in our fate, my dear,” Munaj said, feeling regret looking at the worst culture of our society.

“Sir, my stepfather is out of city. He had ordered me to fetch him Rs 3,000 by the time he comes back. I have barely been able to manage that as for the last two days, I have worked in different places after I got free from my workshop. I’ve not even slept at night and have worked in a hotel as a waiter the whole night. Today, when I fell asleep on an empty stomach after work, some outsiders entered our house and beat me up. They raided our house and found my earnings from the last two days. I begged them but they were cruel. Now what will I say to my stepfather when he comes tomorrow? How will I bring Rs 3,000?”

“Did you recognise them?” Munaj asked Ali.

Munaj consoled him and offered Ali to stay the night at his abode. He reassured him that he would talk to his stepfather himself.

Ali couldn’t sleep the whole night as he feared what would happen the next day. That night, he realised how hard it was to spend his life without parents. He wished his parents were with him at that very moment. Everything would have been very different. They would always support him and stand by him. He felt very lonely.

He spotted a moon in the sky and began talking to himself, “Oh my parents! Are you looking at your hapless son? Like the rest of the parents, you both may have wished to see me becoming a very successful person when I grow up. I’m sorry. Your stupid son may never fulfil your wish and make you proud. I’m tired. Won’t you make me sleep in your lap? Dad, won’t you scold me to stay at home, not to go to workplaces for hours each day? Today, I feel how supportive and caring your scolding was when you were alive. But, it’s all over now. I’m sorry.”

When the sun rose the next morning, Munaj brought breakfast for Ali. When he entered the room, it was empty. He called out his name but Ali was nowhere to be seen.

On the table, a small piece of paper was kept on which a drawing was made of a family. Munaj went near it and saw a couple with the dead body of a child.

The writer is a teacher at DELTA. He can be reached at alijanmaqsood17@gmail.com