Every time Haseena Moin inspired us with her drama serials 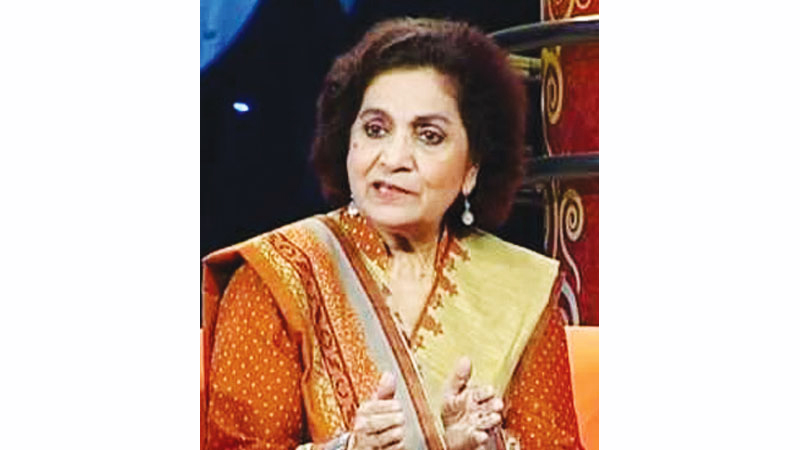 Haseena Moin is a name that needs no introduction. A Pakistani playwright who is known for having written some of the most popular drama serials such as ‘Dhoop Kinare’, ‘Ankahi’, ‘Tanhaiyaan’, ‘Aahat’, ‘Kasak’, ‘Des Pardes’, ‘Aansoo’, ‘The Castle’, ‘Uncle Urfi’, ‘Shehzori’ and ‘Kiran Kahani’ is not only admired in Pakistan but praised across the border as well. This is realised when we come across her plays ‘Tanha’ and ‘Kashmakash’, both written for India on the request of Indian writers.

The purpose of this article is to acquaint the fans of Haseena Moin with a lot of works by her which are lesser known but are equally good when it comes to the things one searches for in her works, such as a fine use of Urdu language, rich vocabulary and a beautiful mingling of tragic and comic situations. Here is a list of such dramas.

‘KOHAR’ — ‘Kohar’, released in 1991, casts Marina Khan, Shakeel, Jamshed Ansari, FauziaWahab and Junaid Butt. It was a mini serial with its story revolving around the life of a neglected girl whose mother has passed away and whose father does not spend time with her. It might turn out to be boring for some people because its language is highly poetic and its theme is one with which not everyone can relate to. But Marina Khan with her young and beautiful persona becomes the biggest attraction and Jamshed Ansari’s comic scenes give life to the drama.

‘MOHIM JOO’ — ‘Mohim Joo’ was a real life story based on the endeavours of a teacher who sacrifices her life in the earthquake of 2005. The role of the teacher was performed by Sawera Nadeem, who while taking her last breath, gives sweets to her students from her pockets and helps them with their survival. It was a long play, a part of the series based on the earthquake stories.

‘JAANE ANJAANE’ — ‘Jaane Anjaane’ was released in the late 1990s with a lovable cast including Nadia Jamil, Humayun Saeed, Vaneeza Ahmad, Asad and Talat Hussain. It was a light romantic comedy shot in Mauritius. The drama has a colourful look to it and while it revolves around the love stories between two young couples, Humayun Saeed’s humorous dialogues make it a treat to watch.

‘TUM SE MIL KAR’ — ‘Tum Se Mil Kar’ was a serious drama released in early 2000s starring Vaneeza Ahmad and Jia Ali. What makes its story typical of Moin is that it discusses the ups and downs in the life of a doctor such as in ‘Dhoop Kinare’ and ‘The Castle’. In this drama, the role of the doctor was performed by Ahmad.

‘MERE DARD KO JO ZUBAN MILE’ — Although a big production of PTV, this serial is not much remembered. Starring Asif Raza Mir, Rabi Pirzada, Tipu Sharif, Angeline Malik and Shameem Hilali, the serial is a historical one discussing the oppression of females in Sindh simultaneously. It was released around 2006 or 2007 and marked Asif Raza Mir’s comeback into the drama industry.

‘KAISA YEH JUNOON’ — a mega production of ARY, ‘Kaisa Yeh Junoon’ was released in 2009. Its story is based on terrorism and religious extremism. Shot in Britain and Pakistan, it included some of the best actors from the industry such as Saba Hameed, Ayesha Omar, Azfar Rahman, Sawera Nadeem, Asif, Ali Kazmi and most importantly, Kiran Kher.

‘MERI BEHN MAYA’ — the drama serial released around the same year. This drama ran along with ‘Saare Mausam Apne Hain’. It was after a long time that Moin came up with a bold heroine, for which she became popular through this drama. This role was played by Annie Jaffri. Javed Sheikh, Shamim Hilali, Neelam Munir and Danish Taimur were also included in the cast. This drama was also shot in Murree.

‘Anjaane Nagar’ — In 2013, came ‘Anjaane Nagar’ for TV One. Once again, a Moin work was shot in Murree. Depicting a taste for classical and historic buildings of the city, it chose as its protagonist Yamina Pirzada, Usman and Samina Pirzada’s daughter.

‘MUHABBAT HO GAYI TUM SE’ — this happens to be her latest work, released in 2017 on TV One. Rahman, Siddiqui, Seemi Pasha, Hira Tareen, Zhalay Sarhadi and many other good actors were chosen for this serial.