Meow Wolf — the art collective taking over the world 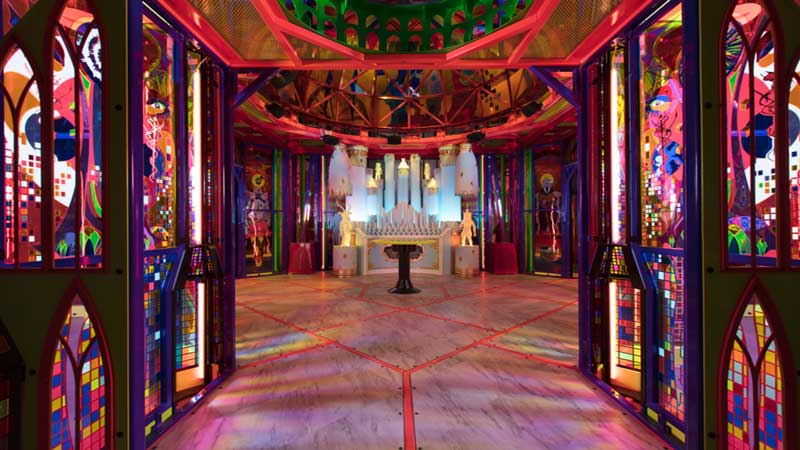 A roomful of strangers are milling around the kitchen of an austere Victorian home when the first portal opens. It’s in the refrigerator. A family walks up to it and is swallowed whole by its comforting glow. As the door begins to creak shut, a young woman in a polka-dot skirt skips up to catch it. “Are you coming to The Gathering?” she smiles. “Come on – follow me.”

In two years, the House has transformed Meow Wolf from a cadre of broke creatives into a 400-employee-strong organization with a fundraising clip on par with tech startups – and a shot at upending the art and entertainment industries as we know them. That starts in the coming months, as Meow Wolf readies its first expansion: an “experience shopping mall” set in a trippy art bazaar in Las Vegas called Area 15, poised to open next year. Then it’s on to Denver, where it’ll hatch a $60 million, 90,000-square-foot immersive art park in 2020 followed by a permanent exhibit in Washington, DC in 2022.

Though some more-traditional gatekeepers might fear it, Meow Wolf’s ascendance is hard to deny. Even as he bemoaned the consequences of its “admissions-based model,” critic Ben Davis coined a genre for the movement: Big Fun Art. Coming from a critic, that doubles as a back-handed compliment. But the need for shorthand says more than the name itself. “I have seen the future of art,” Davis wrote. “That future has a name, and it is an unlikely one: Meow Wolf.”

But first, Meow Wolf is stretching its tentacles into your living room. This year, Nicolas Gonda, the film producer behind Terrence Malick’s The Tree of Life and The New World, signed on to head Meow Wolf Entertainment, which is already working full-tilt on 30 projects aimed at streaming services and theatres.

Meow Wolf’s art takeover falls on the shoulders of Vince Kadlubek, the company’s 36-year-old CEO. Once a hard-partying poet, Kadlubek is typically boardroom-ready these days. In a black sweater and half-rim glasses, he has the cut of a Silicon Valley brand guru with less discernible ego, somehow both no-nonsense and prone to wading into diatribes on ontology, systemic racism and his painful past.

“Before 2014, I not only didn’t have any experience in business, I had very little interest,” Kadlubek says, sitting outside a Santa Fe cocktail bar on a humid afternoon. “I was making $12,000 a year, if I was lucky, delivering food and waiting tables. I was thinking about how to scam the system.”

Kadlubek traces his unlikely trajectory to one night six years ago. He was sitting in a Santa Fe jail cell, poised to lose control of the momentum Meow Wolf had built from its 2011 exhibit, The Due Return, which turned heads in the art world. Courtesy Rolling stone.