Lucky there’s no Saturday detention at the Capitol. Republicans – and some Democrats – would certainly make like Mr. Vernon, the “Breakfast Club” disciplinarian, and lock down the irrepressible Alexandria Ocasio-Cortez. She’s only been in town a moment and has already, in this city of acronyms, become famous enough to supersede the shorthand for the Architect of the Capitol.

A.O.C. now simply signifies the congresswoman from the Bronx and Queens.

No longer content with Nancy Pelosi, the right craves a new she-devil. Republicans have mocked Ocasio-Cortez’s hardscrabble story, howled at her proposal to soak the rich with a 70 percent tax, scrutinized her clothes and booed her at Pelosi’s swearing-in. A.O.C. saucily tweeted back, “Don’t hate me cause you ain’t me, fellas.”

The frenzy reached new absurdity when a tweet popped up with a video of her with friends at Boston University doing a dance from “The Breakfast Club,” with this slam: “Here is America’s favorite commie know-it-all acting like the clueless nitwit she is.” Holy Footloose.

“It is unsurprising to me that Republicans would think having fun should be disqualifying or illegal,” she told The Hill.

On Thursday, 102 women, nearly all Democrats, were sworn in as House members. This influx produced a gratifying inconvenience, reported by The Washington Post: a line for the first time to get into the ladies room off the floor of the House

Like many other attempts to ding A.O.C., this one boomeranged. The clip was the coolest thing in politics since Barack Obama tangoed in Argentina.

“That’s it, Alexandria you’re in the club,” tweeted Molly Ringwald, one of the actresses from the 1985 movie.

When Obama got to the White House, Republicans trembled at his midichlorian count, but their fear faded as he grew more professorial and remote. A.O.C., despite some stumbles and lacunae in political knowledge, is more adept at using the force, especially on social media.

She claimed the mantle of dancing queen, tweeting out a new boogie in front of her congressional office to Edwin Starr’s antiwar anthem “War,” and taunting: “I hear the GOP thinks women dancing are scandalous. Wait till they find out Congresswomen dance too!” 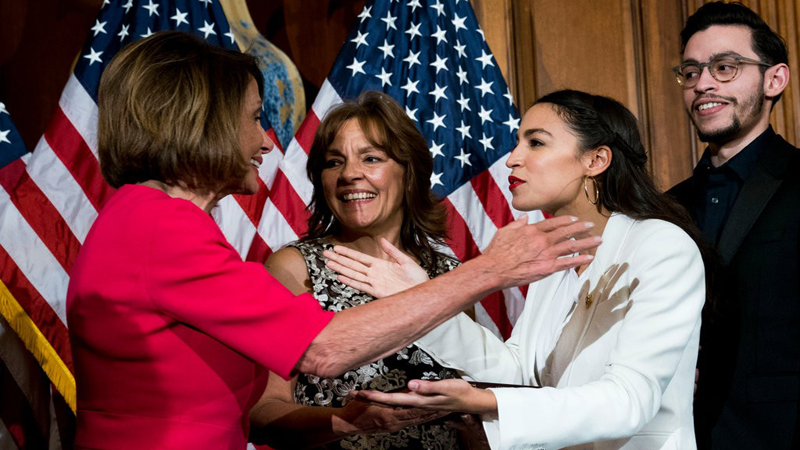 The tableau at the Capitol Thursday, as Nancy Pelosi reclaimed the gavel, was redolent of that iconic “Breakfast Club” scene, with all its rebellious energy and zeal to fight The Man.

When Ocasio-Cortez, a leader of the brat pack that has put the old guard on notice, voted for Pelosi, it was an electric visual: two fierce women, a controlled 78-year-old capping her career and an uncontrollable 29-year-old starting hers, joining forces to fight the 72-year-old Neanderthal in the Oval Office.

I loved seeing the splotches of bright colors, from Pelosi’s hot pink dress to A.O.C.’s gleaming white suffragette-inspired suit, in a chamber that was once a monochromatic sea of men in gray pinstripes. When I covered an earlier “Year of the Woman,” after disgust over the Hill-Thomas hearings swept a group of women into Congress, it was startling to see the first dapples of gold and pink and red lighting up the House floor in 1993.

Cynthia McKinney, a young black freshman wearing gold sneakers, slacks, braided hair and a Mickey Mouse watch, stepped into an elevator in the Capitol and was rebuffed by the elevator operator, who icily repeated three times, “This elevator is for members only” before finally noticing McKinney’s congressional pin.

On Thursday, 102 women, nearly all Democrats, were sworn in as House members. This influx produced a gratifying inconvenience, reported by The Washington Post: a line for the first time to get into the ladies room off the floor of the House.

Pelosi is the ultimate rebuttal to the 1992 Barbie doll who chirped “Math class is tough.” The new speaker can count, legislate, horse-trade and stroke. But she’s also unapologetically tough. “She’ll cut your head off and you won’t even know you’re bleeding,” Alexandra Pelosi said of her mother the other day.

But Madam Speaker will need a few fancy dance steps of her own to keep her exuberant freshmen and her socialist wing in line, so that the centrist Democrats in the country’s middle are not alienated and President Trump does not become, of all things, a sympathetic figure.

Hours after RashidaTlaib became one of the first two Muslim women in Congress, Tlaib told a cheering crowd that “we’re going to go in there and impeach” Trump, referring to him with a raunchy word that made many Democrats cringe.

Put on the spot to comment, Pelosi handled it deftly, saying that, being from an older generation, she did not like the coarse language but that she’s “not in the censorship business” and that it wasn’t worse than what Trump has said.

Indeed, Trump used the word publicly a number of times, including at a 2015 rally, and Kanye West spewed it over the Resolute desk recently while Trump laughed.

Liz Cheney, part of the Republican House leadership, complained about “foul language,” ignoring the fact that her father used an epithet during an argument about Halliburton and Iraq on the Senate floor. Trump huffily called Tlaib’s vulgarism “disgraceful” and “highly disrespectful to the United States of America.”

The spectacle of Republicans as snowflakes is rich. But while the fiery spirit among the new Democrats is refreshing and members of Congress are entitled to say what they want, the brat pack may want to avoid getting too far over their skis while their learning curve is steep.

They should focus on the big picture: Trump is doing such an amazing job as a vulgarian and villain, it would be a shame to get in the way.