For China, Asean is far more important than a mere ‘talking shop’

The Association of Southeast Asian Nations is important to China. This is a statement of fact, not out of courtesy or preference.

Back in 2016, the commemoration of the 25th anniversary of Asean-China dialogue relations was so low key that it barely featured in either side’s media. In 2018, upon the 15th anniversary of the Asean-China strategic partnership, their joint announcement of a 2030 partnership vision showed how keen diplomatic establishments on both sides were to inject new momentum.

It is useful to recall that China only started to interact with Asean – as an entity parallel to its member states – roughly a quarter century after the grouping was formed.

China’s links to Asean informally began when then foreign minister Qian Qichen joined a meeting of Asean foreign ministers in July 1991 ostensibly as a special guest of Malaysia’s government. If that first step was of a tentative nature, then the official formation of the Dialogue Partnership with Asean in 1996 was a milestone for China. After all, China changed its official characterisation of its geographical neighbourhood in the early 1990s from “surrounding” to “neighbouring”, signalling its desire for acceptance as a partner.

In the early 1990s, China was experiencing diplomatic isolation the world over, so focusing on economic relations was its best hope for engagement.

One of China’s first major inroads with the neighbouring bloc was Malaysia, Singapore and Thailand agreeing to receive private Chinese tourists. Such was no mundane measure for China’s growth back then, because it takes daily interaction by average economic citizens to put learning into practice.

Then coincidentally in 1992, while Asean member states launched the Asean Free Trade Area (AFTA), China’s leader Deng Xiaoping toured the southern Chinese province of Guangdong – a watershed moment in which he recommitted his country to “learn from the capitalist world”. 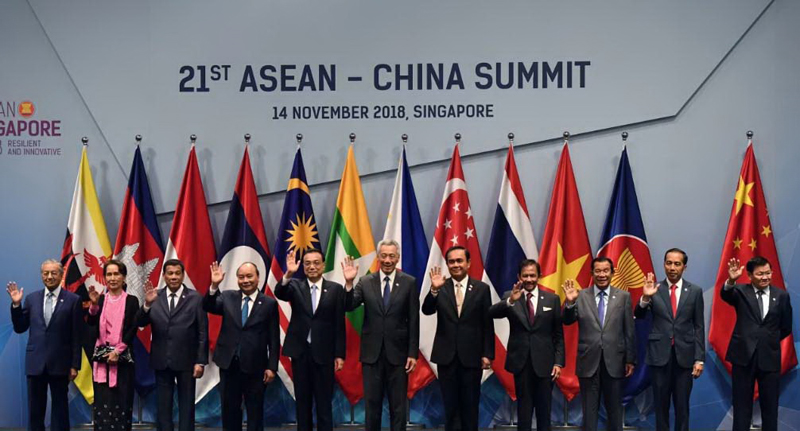 The Southeast Asia group’s importance to China’s foreign economic relations again manifested in the Asean-China Free Trade Agreement (ACFTA) of 2002. Although China joined the World Trade Organisation (WTO) a year prior, the global trade system was strained and still recovering from the 1999 collapse of WTO negotiations in Seattle. It’s worth noting that the basic methodology of ACFTA is a carbon copy of the Asean Free Trade Agreement (AFTA) among member states.

Since then, China and Asean have entered into a series of arrangements to update trade and investment ties. In the area of investment protection, in particular, China benefits greatly by negotiating with the Asean bloc then applying the agreed articles to all Asean member states regardless of their different previous institutional arrangements with China.

In the realm of political diplomacy, Asean is an intergovernmental grouping that neither makes pretence of exercising authority over its member states, nor disciplines a member state’s pursuit of ties with a non-member. Measured against standard definitions of power and diplomacy in the Western world, such operating principles often lead to its designation as a “talking shop”.

But for China, it is precisely Asean’s non-interference principle that makes managing political relationships in Southeast Asia comfortable. In operational terms, Asean-China routine diplomacy offers the necessary and convenient cover for maintaining a minimal level of bilateral contacts with an Asean member state in times of difficulty or temporary impasse.

Another unique feature Asean has developed is the Country Coordinatorship – that is member states rotating the role of coordinating the bloc’s relationship with each of its 10 Dialogue Partners every three years. This arrangement helps Chinese government agencies and research institutions understand the internal dynamics of the grouping. It also makes it easier for the Chinese side to acknowledge Asean’s single voice, while also touching base with all sides concerned.

But there have also been difficult times of political diplomacy between Asean and China. One notable case came in 2012 when, for the first time ever, the Asean Foreign Ministers Meeting ended without a joint communique. The sole cause of disagreement was the wording of the position on matters pertaining to the South China Sea.

Specific circumstances that led to such an outcome are beyond the scope of inquiry here. But it was and to some degree still is a puzzle to many Chinese observers: If it is Asean’s tradition to refrain from taking positions on territorial disputes among its members, on what ground does the group claim solidarity over territorial disputes between China and some of its member states?

The structural nature of the above-mentioned episode is Asean centrality. In the sphere of trade and investment, when Asean moves in unison, the net result is a plus for China. But when it comes to regional geopolitical dynamics, the plus side is Asean’s omnidirectional platforms like the Asean Regional Forum, Asean Defence Ministers Meeting Plus and East Asia Summit, which allow China to be at the table of regional diplomacy. Participation brings China assurance of means for protecting its interests and cultivating its image.

It works against Beijing’s interests if Asean centrality is promoted as a means for either hedging against alleged Chinese expansionism through intra group solidarity or inviting external forces to counter China. On the one hand, such reasoning is innate in geo-strategic thinking about the choice that any group of geographically small states should have for dealing with a large neighbour. On the other hand, practices of centrality so justified can invite nervous reactions from China, thus creating a vicious cycle of distrust.

As China and Asean have a fairly short history of formalised intergovernmental interactions, it is natural for both sides to experience occasional hiccups in their expansive ties. It is, therefore, incumbent upon Asean and China to continually reassure each other about their benign geostrategic calculations over traditional security issues. In the marine and maritime spheres, for example, Asean and China may find it useful to build on successful tutelage on marine and maritime cooperation anchored by the United Nations.

As geographical neighbours, China and Asean member states have learned to cope with the ebb and flow of history to thrive in their nation-building and develop their bilateral ties. Asean-China partnership, therefore, must build on such resilience to ensure regional stability and prosperity against the shifting global dynamics4