Two-hour mark tipped to tumble, but not for another decade 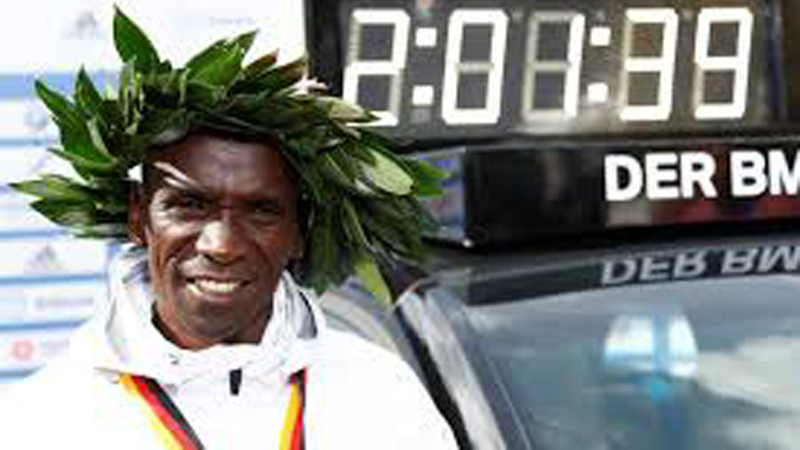 LONDON: Eliud Kipchoge moved tantalisingly close to the magic two-hour mark for the men’s marathon last year, but a former world record holder and a sports science expert both think it could take another decade or so for the barrier to fall. Kipchoge’s record time of two hours, one minute and 39 seconds, set in Berlin in September, has ignited talk in the athletics world of whether the Kenyan, or perhaps someone else, can dip under two hours sooner rather than later. Derek Clayton is a member of the ‘later’ camp. “For the past 40 years I have been watching with great interest the improvement as the time edges closer to the two-hour barrier,” Clayton said in an email to Reuters. The 76-year-old Australian knows his subject.

Clayton set a world record in clocking 2:09.37 at Fukuoka, Japan, in 1967, a time that a half century later would still have placed him seventh in Berlin last year.

He went even faster with 2:08.34 in Antwerp in 1969. “In an effort to see if it was possible for it to be done in my lifetime I have been plotting each world time since my 2:08,” Clayton said of the two-hour mark. “It has been an amazing constant downward trend, indicating a two-hour marathon around the year 2030, with 2025 the absolute earliest. “I have been forecasting (as a bit of fun as against any real science) the year 2030 for the past 20 years and so far it seems I am still on course. Hopefully I will still be around to see it!”

Clayton worked full-time on top of punishing
training regimen: Clayton ran his times for the classic 42.2-km race despite being self coached and working a full-time job on top of a punishing training regimen of roughly 250 km a week. It makes one wonder what he might have done had he run full-time, and enjoyed the benefits of modern shoes, a scientifically-devised training regimen and a good support system. Kipchoge’s Berlin record came wearing Nike’s Vaporfly shoes, which have a curved, carbon-fibre plate embedded in a thick layer of lightweight foam.

Independent studies have concluded that the shoes improve metabolic efficiency by 4 percent, though that does not necessarily mean a runner will be 4 percent faster. Whatever the specifics, it makes logical sense to conclude that modern shoe technology is of some assistance. Michael Joyner, a doctor and researcher at the Mayo Clinic in Minnesota, backs Clayton’s opinion that it will probably take another decade or so for the two-hour barrier to be breached. He wrote a paper nearly 30 years ago predicting that a sub two-hour time was feasible, and has observed nothing in the ensuing years to change his mind. Much as he admires Kipchoge, he thinks it is doubtful the reigning Olympic champion will be the one to do so.

Kipchoge performed his Berlin barnstormer despite running solo for nearly half the race, and on a day that was warmer than the ideal distance running temperature. It came some 16 months after Kipchoge clocked 2:00.25 in an unofficial Nike-organised attempt on the Monza motor race track. Pacemakers there dropped in and out and ran in a diamond formation to shield the Olympic champion from the wind. Pacemakers, to be sure, are allowed in official races, but cannot drop in and out of the race.

Age not on Kipchoge’s side: But Kipchoge is now 34 and, while he is still improving, it would be a big ask to expect him at his age to take another 100 seconds off his personal best, even if someone was good enough to push him until the dying stages. “If he stays motivated and avoids injury, no reason he can’t go another three or four years at a high level,” Joyner said in a telephone interview. “My guess is he probably thinks he can get another 10 or 20 seconds.”

Joyner thinks there is a roughly 50 percent chance that somebody will break two hours by 2028. A more likely candidate than Kipchoge is perhaps Ethiopian teenager Selemon Barega, who ran 12:43.02 in the 5,000m this year, a time bettered by only three others in history.