2018: the year the global order frayed 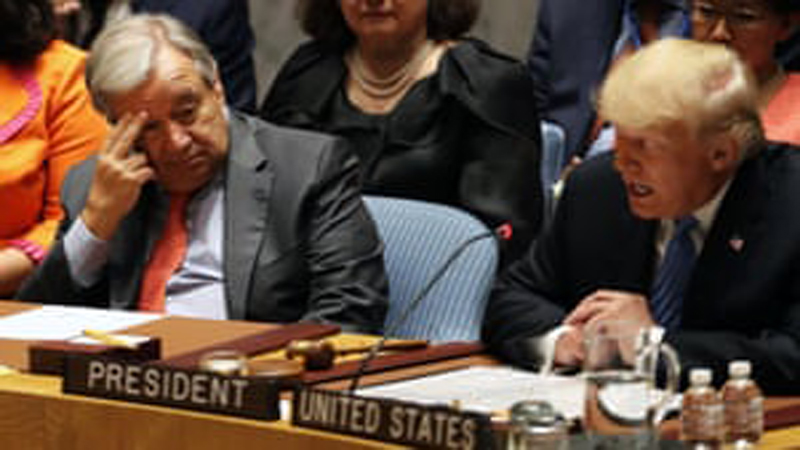 It was a year the world regressed – at least in terms of relations between states. Binding treaties were discarded, multilateral organisations were denigrated and usurped, international law was ignored, and the authority of the United Nations came under unprecedented challenge. The ideal, encouraged since 1945, of a global community making common cause to right the world’s wrongs faded. In 2018, the ties that bind frayed.

Donald Trump appointed himself public enemy number one of the global order. By his words and actions, he undermined the UN, the EU, the World Trade Organisation, the International Monetary Fund and the North American Free Trade Agreement.

Trump questioned the usefulness of Nato and disrupted its meetings. He withdrew the US from the multilateral 2015 nuclear pact with Iran and, assuming global jurisdiction, vowed to punish anybody who disagreed. When the international court of justice in the Hague outlawed his Iran sanctions, he ignored it. Trump reneged on the Intermediate Nuclear Forces treaty, a key 1987 arms control pact with Russia, quit the UN’s human rights council, cut funding for UN organisations, and trampled on multiple UN resolutions by recognising Jerusalem as Israel’s capital.

Putin colluded with Bashar al-Assad’s use of chemical weapons in the war in Syria, in open defiance of the global 1997 UN convention banning their use. The US, UK and France launched one-off missile strikes after a suspected sarin nerve gas attack in Douma, a suburb of Damascus – strikes Moscow condemned as illegal. Russia, Iran and Turkey promoted an alternative Syrian peace process, undermining UN-led talks.

Russia mounted a chemical weapons attack, using the novichok nerve agent, in southern England, against a former spy, Sergei Skripal. Its agents tried to hack the international watchdog, the Organisation for the Prohibition of Chemical weapons, and Britain’s Foreign Office. Britain demanded the extradition of those responsible for the Salisbury attack. Putin refused. In December, the 70th anniversary of the landmark Universal Declaration of Human Rights passed largely unnoticed and un-celebrated.

Others were guilty, too. The US shielded Israel from UN censure after its forces killed dozens of Palestinians on the Gaza border in May. It later blocked a ceasefire resolution on Yemen. Ignoring the UN convention prohibiting racial discrimination, Israel passed a nationality law institutionalising discrimination against Arabs and non-Jewish minorities.