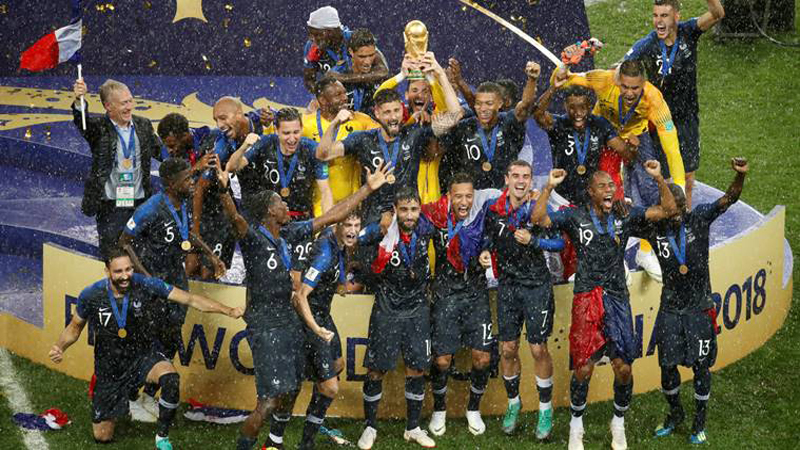 LONDON: Any fears that the 2018 World Cup in Russia would be overshadowed by political antagonism were completely smashed as the June-July extravaganza set pulses racing and ended with a young, exciting France team clinching the title. A thrilling tournament undoubtedly got the final it deserved as France, spearheaded by Antoine Griezmann and Kylian Mbappe and moulded into a coherent unit by coach Didier Deschamps, dazzled in a 4-2 victory over a technically gifted Croatia. The tournament, dubbed the “greatest World Cup ever” by FIFA President Gianni Infantino, had kicked off in style with the hosts’ 5-0 thrashing of Saudi Arabia.

That set the tone for a World Cup that not only provided entertainment by the bucketload but also turned a number of expectations on their head, before ending with a fourth consecutive triumph for a European side. Stanislav Cherchesov’s Russia certainly surpassed expectations by reaching the quarter-finals, seeing off 2010 winners Spain in the last-16 on penalties. Tipped as one of the favourites, Spain had imploded days before their first match, sacking coach Julen Lopetegui after he had agreed to become Real Madrid manager after the tournament, replacing him with Fernando Hierro.

Spain at least fared better than defending champions Germany, who were dumped out in the opening round for the first time since 1938 following a 2-0 defeat by South Korea. While there were some superb individual performances, notably by Portugal’s Cristiano Ronaldo and Croatia’s Luka Modric, the star of the tournament was arguably not a player, but the video assistant referee (VAR).

Many had greeted FIFA’s decision to approve the technology for the tournament back in March with a degree of scepticism. Yet VAR went on to be a success, making crucial decisions and overturning injustices, while adding an extra layer of drama to proceedings. The playacting antics of Brazil’s Neymar could not escape the camera’s forensic lens, while Germany’s fate was sealed when the VAR correctly overturned an offside decision in the lead up to a South Korean goal. VAR even made an intervention in the highest scoring final in the tournament’s history, helping to award a penalty to France, a record 29th in the tournament, scored by Griezmann.

Nations league: Gareth Southgate’s young England side also defied gloomy World Cup expectations and put years of misery behind them by reaching the semi-finals. They were prevented from featuring in only their second ever final by Croatia, but would have a small measure of revenge a few months later in the inaugural UEFA Nations League. That competition was introduced to replace stale and uncompetitive international friendlies in Europe, but its four-league, four-group format left many observers scratching their heads.

Yet whether it was a feeling of World Cup nostalgia, or the fact that players were still in their early energetic days of the season, the Nations League began with a series of pulsating and compelling ties. The Netherlands, who had not qualified for the World Cup, were resurgent under coach Ronald Koeman and heaped more misery on Joachim Loew’s Germany by beating them 3-0 at home in October.

Virgil Van Dijk’s stoppage-time equaliser in the return fixture last month then secured their progress to the final-four stage of the competition next year where they will play England. Finals hosts Portugal will face Switzerland in the other tie. Lower down the chain, Gibraltar secured their first ever competitive victory by winning 1-0 away to Armenia. It was a similar story for Kosovo, who were relishing playing among teams of similar stature in League D, eventually topping Group 3 to gain promotion.