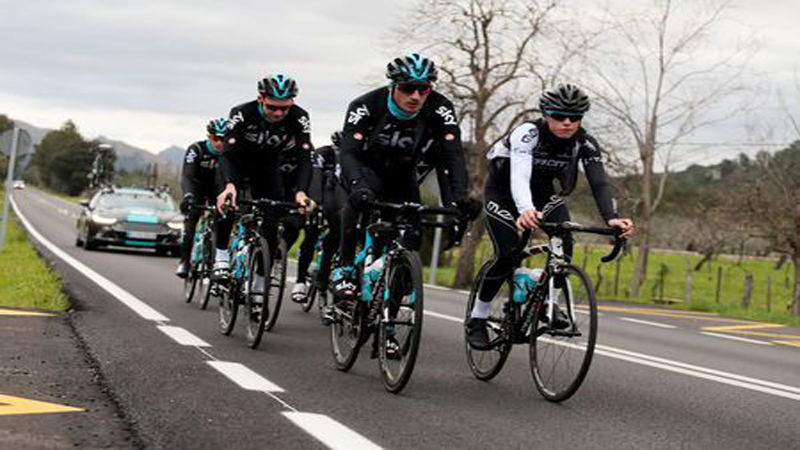 LONDON: When Team Sky launched in London in 2010 with the ambition of having a British winner of the Tour de France within five years, there was more than a modicum of scepticism at the undoubtedly flashy new boys in the peloton. Not that there was inexperience as British Cycling’s Dave Brailsford was installed as team principal and brought with him the “marginal gains” strategy that would underpin the team’s successes and controversies over almost a decade of extraordinary success. Six out of seven Tour de France titles, three of which were won by different riders, and Chris Froome holding all three major tour titles at once would be impressive enough in isolation but, coming after more than 100 years of Britain failing to get a man on the Tour podium, the success and the speed with which it was achieved were nothing short of astonishing. The broadcaster, which has announced it will end its association with the team next year, had already enjoyed a fruitful partnership with the national cycling federation and, with Brailsford’s persuasion, a team was built to nurture young British talent and win cycling’s biggest prizes.

At the time, reports said the investment was worth £30 million over four years but by 2017 their budget for that year alone was £31.1 millios. Such figures dwarfed anything the rest of the peloton could muster and soon led to a seething undercurrent of animosity. Bradley Wiggins finished 24th in Team Sky’s tentative debut at the Tour de France in 2010 and two years later became the first British winner of cycling’s most prestigious event.

With Wiggins also leading British domination of the cycling programme at the 2012 London Olympics, Brailsford was the toast of the sporting world. “The whole principle came from the idea that if you broke down everything you could think of that goes into riding a bike, and then improved it by one percent, you will get a significant increase when you put them all together,” Brailsford said that year, expanding on his marginal gains philosophy. At a time when trust in cycling was at an all-time low on the back of Lance Armstrong and relentless doping revelations, Sky seemed a shining beacon for their focus on technical improvements and their insistence on ‘winning clean’.

But soon the halo began to slip. The team struggled to explain the delivery of a mystery “jiffy bag” for Wiggins at the 2011 Criterium du Dauphine race in France and Brailsford’s belated claim that it was a ‘flu treatment that needed to come from England did not convince many onlookers. A 14-month U.K. Anti-Doping investigation into its contents eventually hit a dead end due to a lack of accurate medical records being available. In March this year, a damning report by the British government’s Digital Culture Media and Sport select committee said that the team had cynically abused the anti-doping system by using therapeutic-use exemption certificates.

PR damage: Froome won the Tour in 2013 and would go on to win another three but he too came under the microscope for an adverse analytical finding for asthma drug salbutamol. He was later cleared of any wrongdoing by the governing UCI, but the PR damage had been done. Despite winning the Giro d’Italia, again another milestone for a British rider, Froome endured his worst reception in France, being jostled and spat at on this year’s Tour as critics accused Sky of crossing the ethical line. Geraint Thomas won his maiden title in the race to give the team a timely boost, considering the Welshman’s lack of connection to any controversies. By then it was clear what a force the Sky machine had become from that flashy but nervous launch in London in 2010, with its huge entourage, clad in black-and-blue, leading the way wherever they went. Even their buses went out in front.

There was no doubting who Wiggins was referring to at his own team’s season launch earlier this year. It was changes further up the food chain that probably spelt out the end of Sky’s association as last year James Murdoch resigned as Sky plc chairman following the majority-control takeover by U.S. cable group Comcast Corp.

Murdoch had been the main driver of Sky’s involvement in cycling. He was a keen fan of the sport and the push to make the team the best in the world had not been simply a business decision but one of personal passion, too. With Murdoch gone, so too it seems is the passion as Sky pursues other aspects of its business. As far as shaking up the world of cycling and putting British riders to the fore, the sponsorship has undoubtedly been a spectacular success. The team hopes to continue beyond next year but any potential new backer is highly unlikely to be able to match Sky’s investment levels, suggesting that the end of one of the most dominant eras in the history of the sport is about to draw to a close.