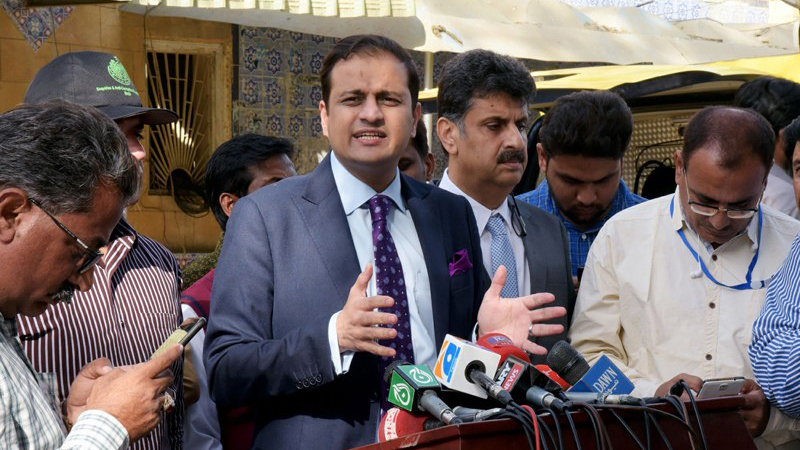 KARACHI: Provincial advisor on Information Barrister Murtaza Wahab said that the apex committee was informed on Monday that the law and order situation in the province was exemplary but more interventions were required to make it durable.

Briefing the newsmen following the apex committee meeting, Murtaza Wahab said that the committee had decided to bring an amendment to law with a view to cope with street crimes and bifurcate it into two parts. He further said that crackdowns would be launched at the secondary markets where stolen two wheelers were sold out.

He said in order to keep a watch on terrorist elements, the meeting had decided to stricter security measures at Sindh’s border with Punjab and Balochistan. “A pilot project would soon be launched under the safe city project. The scope of the project would gradually be expanded to the rest of the metropolis and later, the entire province,” said advisor the Sindh chief minister (CM).

Barrister Wahab said that the apex committee was also told about the rehabilitation process launched by the Sindh government for the affectees of the ongoing encroachment drive and the review petition filed by the government in the Supreme Court (SC). He said that CM Murad was of view that the three unfortunate terrorism incidents which took place in Landhi, Gulistan-e-Johar and Chinese consulate underlined the importance of focusing on security for permanent peace in the city.

The provincial advisor said that Karachi Safe City Project would not be initiated under Public Private Partnership (PPP). He shared that National Database Registration Authority (NADRA) and other institutions who had expertise on the subject had been requested to submit their proposal for Safe City Project.

He said that not only CCTV cameras but swift response mechanism would be integrated in Safe City project to take timely action in case of any untoward incident. “Police, Traffic, Fire Brigade and other emergency services plan would be the part response mechanism,” said Wahab.

He said that meeting was informed that a police station had been established on the Sindh Balochistan border and 69 police posts were setup along the border where 381 police personnel had been deputed to keep eye on the entry points of bordering areas.

Barrister Murtaza Wahab told the newsmen that Sindh Apex Committee which was presided over by CM Syed Murad Ali Shah reviewed law and order situation of the province, implementation of National Action Plan and investigation and prosecution of anti-terrorism cases. The committee also gave approval to its 22ndmeeting minutes.

Barrister Wahab said that the committee had decided to amend the law and ATA would be rescheduled to control the street crimes in the metropolis and as per reforms special magistrate will hear the cases of street crimes under Section 30 of CRPC. Under the law three to seven years sentenced could be awarded to criminals.

He said that committee had decided to seek Pakistan Army Cyber Wing’s assistance to control cyber crime in the province. He said it was also decided that Rangers, Jail personnel and relevant agencies would work together for coordination in the investigation and prosecution of criminals while trainings will be arranged for the new prosecutors for their capacity building.

He further said that meeting was informed that a working group had been formed under the chair of Sindh home department secretary for the registration of madrasas and monitoring of other public and private institutions.

“It was also decided in the committee that monitoring of madrasas and educational institutions would be carried out on three points which is source of income, it’s expenditure and curriculum review, “he said. He added that the meeting was informed that draft had been prepared for registration of religious seminaries which have been sent to law department for vetting. “The meeting also decided to hold talks with managements of religious seminaries situated on the major roads of city,” he added.