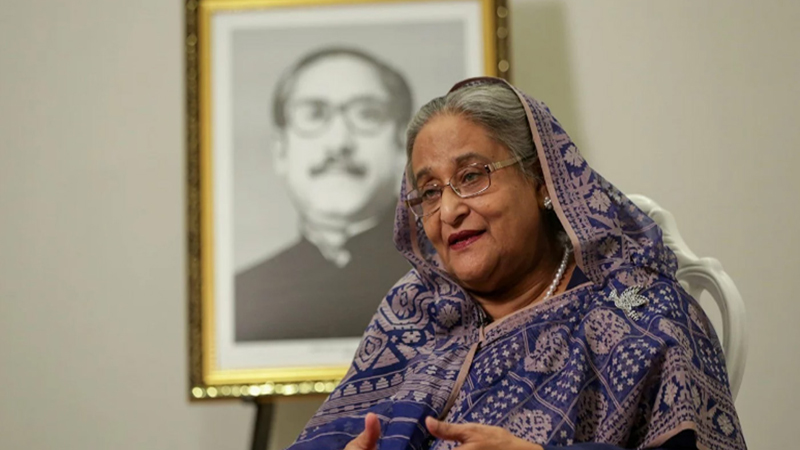 According to UN reports, the literacy rate among Bangladeshi women is now 94 percent, higher than the 91 percent rate for men. A child born in the country today has a life expectancy of 73 years, compared with 66 years in India. The enrolment of girls in primary and secondary schools has increased to the point it now surpasses that of boys, while per capita income growth in Bangladesh is 6.2 percent, compared with 5.4 percent in the developing world.

But some analysts are still not convinced this track record will be enough to secure Hasina a win in the country’s upcoming parliamentary election.

Bangladesh, which has a population of 165 million and shares borders with Myanmar and India, will go to the polls on December 30.

Under Hasina’s leadership, it has balanced China’s growing interest in gaining influence with India’s unease at its regional rival’s intentions.

As part of its “Belt and Road Initiative”, China plans to spend US$30 billion on infrastructure in Bangladesh — including the US$2.86 billion Sitakundu-Cox’s Bazar marine drive motorway — and is contributing US$753 million to the dual-gauge rail track between Joydevpur and Ishwardi as well as US$1.4 billion to the Dhaka airport to Ashulia motorway.

This makes Bangladesh the second-biggest recipient of Chinese money from the belt and road plan in South Asia, behind Pakistan.

India, which helped create Bangladesh in 1971 through military intervention to end a bloody civil war, has spent US$7 billion on infrastructure projects in Hasina’s country since she came to power — much of it to facilitate connectivity to India’s own remote northeast.

While Hasina has accepted Chinese funds to speed up development in a country where the per capita income is US$3,500, she has been a much tougher nut to crack than leaders of neighbouring countries.

Hasina’s Awami League government has negotiated hard on lowering interest rates and on keeping out Chinese labour and even cancelled a deep seaport project at Sonadia islands — the latter, some said, to avoid upsetting India. This year, discomfort with increasing Chinese influence and investment had an impact on the fall of Beijing-friendly governments in Pakistan and the Maldives.

But Hasina has obtained funding from China and India without ever looking like she was selling out on long-term interests. And to placate the majority-Muslim population, she has also accepted Saudi funding for constructing 560 mosques.

The challenge for her seems to be one of factionalism. Hasina’s compatriots in her political party are bickering as more than 4,000 aspirants jostle to be nominated for positions in the 300-member House.

In contrast, they are facing a relatively united opposition for the first time in more than 10 years.

The Bangladesh Nationalist Party (BNP), which boycotted the January 2014 polls, has thrown its hat in the ring, together with an alliance of smaller opposition parties led by former president Badruddoza Chowdhury and former Awami League foreign and law minister Kamal Hossain.

The hardline Islamist Jamaat-e-Islami party — BNP’s long-term ally, but now deregistered as a political party by the Election Commission — wants to field candidates using the BNP election symbol, as do other smaller parties.

“This move is very significant. It will boost opposition unity and ensure complete polarisation of the electorate — Awami League versus the rest,” said Bangladeshi columnist Sukharanjan Dasgupta.

A senior Bangladesh intelligence official told This Week in Asia on condition of anonymity: “If Hasina and other senior leaders cannot control the factionalism, many aspirants would contest as independents and split the party’s vote bank. Some may sabotage the prospect of the party’s official candidates.”

BNP’s Mouded Ahmed, a former prime minister, said members of the current administration faced serious charges of corruption and misuse of administrative machinery. “The people are desperate for a change. They want to restore democracy and the right to vote freely,” he said.

But Hasina has won plaudits from peers and allies — her crackdown on terrorism and rebels in India’s Northeast has brought her admirers in New Delhi. By sheltering nearly 1 million Rohingya hounded out of neighbouring Myanmar, she has won praise from the West and beyond.

Syed Al-Muti, associate director of the Asia Foundation said: “Alongside the progress in education, health, and gender equity, Bangladesh is also in the midst of a growth take-off that has reduced poverty and doubled per capita income. The government deserves praise for putting in place the essential preconditions that have allowed private sector dynamism to fuel economic growth.”

A recent national opinion poll conducted this year by the US-based International Republican Institute (IRI) found significant support for Hasina and the Awami League — 62 percent of respondents said they felt the country was headed in the right direction, though this was down from 75 percent a year ago.

The other worrying point in the survey was the increase in the number of people who refused to answer certain questions: 40 percent of respondents would not comment on whether political stability would improve or worsen, up from 29 percent last year. “That is the floating vote, the undecided non-partisan voter who decides last minute. Much would depend on them,” said columnist Dasgupta.

There are, however, some factors in Hasina’s favour. She is the daughter of Bangladesh’s founder, Sheikh Mujibur Rahman, who was assassinated in a military coup in 1975. Hasina herself survived a grenade attack in 2004 that killed 24 of her party colleagues.

Meanwhile the opposition has no clear candidate for prime minister — nor a vision to match Hasina’s.

With BNP chairperson Khaleda Zia in jail and her son Tarique Rahman living as a fugitive from justice in London, the party may turn to Tarique’s wife Zubaida, a political newcomer, to lead the charge.

Kamal Hossain and Badruddoza Choudhury reportedly entertain prime ministerial aspirations as well because of their long experience in government.

Ultimately, Hasina’s fate lies in the hands of young voters, as 23.5 million of the 103 million-strong electorate are aged between 18 and 28.

This group, buoyed by her strong develop mentalist agenda, voted for her party in the 2008 elections, and also turned out in force during the 2014 polls that were boycotted by the opposition. Analysts say young voters tend to be swayed by issues and do not have the hard political loyalties of the older generation. Their turnout is higher than that of older people.

“In Bangladesh, we are always choosing the lesser evil,” said college student Salma Ashrafi Tonoya, 19, who will be voting for the first time this December. Much depends on whether her peers think the same way.