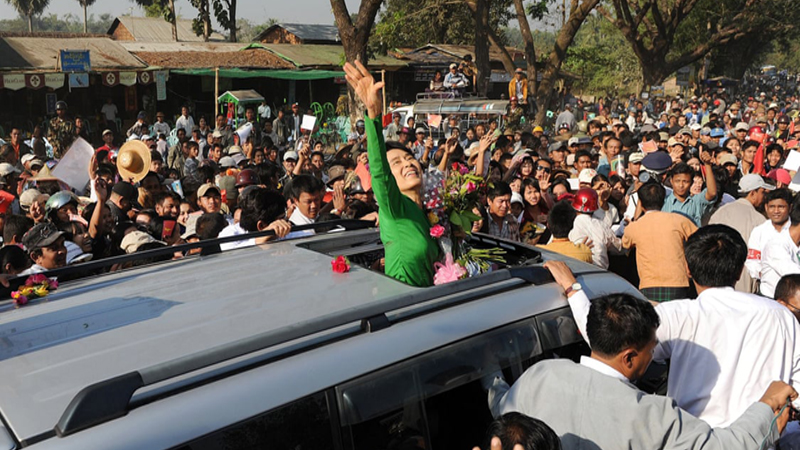 There are falls from grace, and then there is Aung San Suu Kyi. In 2015 her election to the post of state counsellor – de facto head of government – was hailed as a sea-change moment for Myanmar.

Three years on, the feted Nobel peace prize winner has become a global pariah at the head of a regime that has excused a genocide, jailed journalists and locked up critics, leaving the international community wringing its hands as Myanmar remains as repressive as ever.

Last week, Amnesty International became the latest organisation to strip Aung San Suu Kyi of a human rights award, citing its “profound disappointment” in her. Just days later, the 700,000 Rohingya refugees who fled Myanmar after a brutal military-led campaign of ethnic cleansing in August last year collectively refused to take part in a repatriation plan, due to Myanmar’s failure to ensure they had freedom, rights and safety. Many believe the Myanmar government, which Aung San Suu Kyi leads, has no intention of taking back the Rohingya at all.

“While she has always been a politician, she used to be a politician that stood for democracy and human rights, including freedom of the press,” said Bill Richardson, a US diplomat who has known Aung San Suu Kyi for 25 years. “She has clearly failed to champion these issues since coming to power. Her government has been as enthusiastic about jailing journalists and government critics as the military government that preceded hers.”

Yet there was always a distance between the myth portrayed in the media and the real-life Aung San Suu Kyi. Until her election in 2015, most around the world knew her as “the Lady”, a saintly figure uniquely adored by the west and Burma’s numerous ethnic groups; the articulate, elegant champion of peace and democracy who sacrificed her life and family for her country; the woman who stood on a rickety table outside her Yangon family home-turned-prison to make speeches on equality while under house arrest.

But there was also another Aung San Suu Kyi, one whose leadership style, behind closed doors, always bordered on authoritarian, who from the beginning refused to delegate even the smallest task and was obsessive about controlling every meeting and every message, who was driven not purely by ideology, but a dynastic determination to continue the legacy of her father, Gen Aung San, known as the father of modern-day Myanmar.

No one tried to resist the idealised version of Aung San Suu Kyi more than Aung San Suu Kyi herself, aware of the fragility of the pedestal the west in particular had placed her upon. “I am just a politician,” she said in a 2015 interview. “I am not quite like Margaret Thatcher, no. But on the other hand, I am no Mother Teresa either. I have never said that I was.” 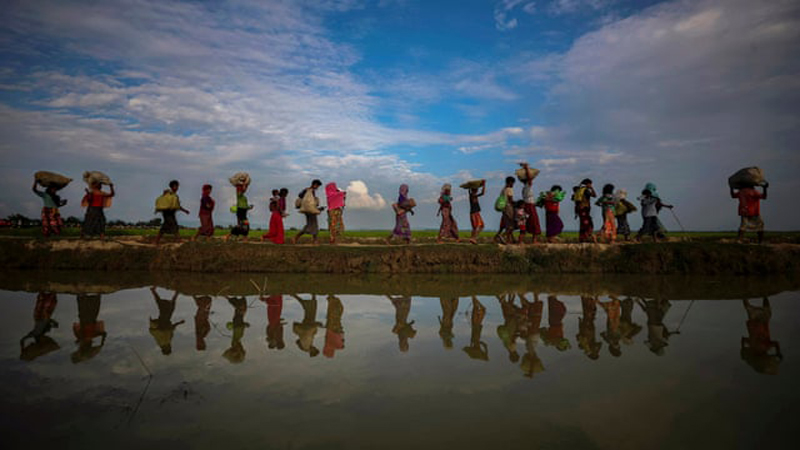 Nevertheless, her transformation from celebrated human rights campaigner to someone widely condemned for excusing – at best – genocide and ethnic cleansing, has shocked her former supporters. “I don’t think she is xenophobic but perhaps because of the overwhelming current of opinion within Burma, which is very hostile to Islam, she has just gone along with it,” said Peter Popham, who has written two biographies of Aung San Suu Kyi. “And the fact that during the 2015 election the NLD [National League For Democracy] rejected all sorts of very capable Muslim candidates was already a very worrying sign of weakness from her on this issue.”

Born in Myanmar, then under British rule, in 1945, she was the daughter of the country’s most celebrated general, who secured its independence from the British empire in 1947 but was then assassinated the same year. She went to the University of Oxford, then worked at the United Nations for three years, before marrying Michael Aris in 1972 and settling down in the UK. However, back in Burma, a repressive military regime had taken hold, following a coup d’état in 1962, and the country closed itself off to the world.

When Aung San Suu Kyi moved to Myanmar in 1988 from Oxford, leaving behind her husband and two children, it was never with any other intention than nursing her sick mother. Yet, as the story goes, while she was there she became swept up in the anti-junta, pro-democracy demonstrations, and found herself leading the movement, with the backing of thousands of supporters. In 1988 she founded the NLD, and in 1989 she was placed under house arrest by the military regime, where she remained – on and off – until 2010.

But from the beginning Aung San Suu Kyi’s poor leadership skills were apparent. “When she was under house arrest the NLD practically shut down,” said Mark Farmaner, head of Burma Campaign UK, who helped train NLD figures in Myanmar.

“Everyone was too afraid of her to do anything or take any initiative, she would not delegate any areas or issues to anybody at all, and there was no clear articulation of any policies. Even back then we were concerned there was a lack of any sort of ideology and everything was personality focused.”

Once she was released from house arrest, things only worsened. Encouraged by the British embassy, she set up her own private office in her home separate from the NLD office and began to distance herself from many of the key NLD figures who had been her supporters. Even investor and philanthropist George Soros, who had been a huge funder of the NLD, struggled to get a meeting with her.

“Back then, we all believed she was a leader who could bring about magnificent changes in the democratisation of Myanmar,” said Yan Myo Thein, a political analyst in Myanmar. “But she began ignoring and sidelining her former comrades and colleagues, including the leaders of the ethnic minorities. She is a good speaker but not a good listener.”

Word of Aung San Suu Kyi’s inability to delegate became a major concern to the British embassy in Myanmar, who viewed her as her country’s best hope for democracy, particularly after she was elected an MP in 2012.

On a trip to the UK in 2012, in a bid to demonstrate the importance of having a broad team of advisers, when Aung San Suu Kyi visited then foreign secretary William Hague, she was deliberately walked through offices filled with all his staff so she could be shown he did not work alone.

Similarly, when she met then Labour leader Ed Miliband, the decision was taken to introduce her not just to him but to the whole shadow cabinet and their advisers. Miliband even proposed that the NLD would become a sister party to Labour, though the agreement was never formalised.

The NLD win in the 2015 elections led to the party having a parliamentary majority and Aung San Suu Kyi being appointed state counsellor, the equivalent of prime minister. The global expectations placed on her were unrealistically high, said Benedict Rogers, leader of the East Asia team at human rights organisation CSW, who met Aung San Suu Kyi multiple times. For all the talk of progress, she was still constrained by the 2008 constitution, which secured the untouchable power of the military and guaranteed them 25% of the parliamentary seats.

The NLD’s parliamentary majority does give the party legislative power but no policy to advance the progress of democracy has materialised in three years. Aung San Suu Kyi continues to refuse to delegate, holding not just the state counsellor title but also minister of education and minister of the president’s office. Most decisions – big or small – have to go through her, making the Myanmar government a highly inefficient operation.

“We knew the 2015 election was not a transition to democracy, we knew the military’s intent was not genuine, but we thought that at least Aung San Suu Kyi would move in the areas she could with a parliamentary majority: things like releasing political prisoners, repealing repressive laws, creating a free press, trying to improve the economy, environmental issues,” said Farmaner. “She hasn’t done any of those things. Even the limited expectations we had have not been met.”

But Aung San Suu Kyi’s name has been irrevocably tarnished most by her refusal to speak out against both the brutal violence against the Rohingya Muslim minority in Rahkine and the jailing of the two Reuters journalists Wa Lone and Kyaw Soe Oo, who are widely thought to have been set up after their exposure of the military’s brutal actions.

The Rohingya Muslims have always been one of the most persecuted minorities in Myanmar but had long placed their faith in Aung San Suu Kyi as the leader who would at last treat them as rightful citizens. They were always among those demonstrating on her behalf since the 1990s, standing shoulder to shoulder with the NLD.

It was trust that proved to be misplaced. While she was not responsible for the military crackdown that occurred in Rahkine state in August 2017, she has said nothing to condemn it since it happened. Aung San Suu Kyi propagated assertions that the military’s actions were an appropriate response to a Rohingya militia uprising, even describing the generals accused of genocide as “quite sweet”.

She is also said to regularly express irritation to diplomats that all anyone talks to her about is Rahkine. Yanghee Lee, UN special rapporteur to Myanmar, said Aung San Suu Kyi was “annoyed” when she raised the Rohingya in their meeting.

Richardson was among those on an advisory panel set up by Aung San Suu Kyi to help address the Rohingya crisis, but such was her stubbornness on the topic, Richardson swiftly – and very publicly – quit in January this year.

“I think she has bought into the military narrative of what happened in Rakhine,” said Richardson. “There was – and remains – no space for dialogue with Aung San Suu Kyi on Rakhine. She views anyone who offers constructive criticism that does not fit her narrative as disloyal.”

Richardson was unapologetic in his condemnation of the woman he had once championed. “Her lofty rhetoric belies reality,” he said. “She has an autocratic leadership style and is overly reliant on a small circle of old-guard advisers.”

One of the few figures who does still have regular access to Aung San Suu Kyi, and remains positive about her, is Roelf Meyer, the South African politician who helped negotiate the end of apartheid.

He is now working on the ground in Rahkine on reconciliation for the Rohingya. “I have access to her and I have access to what I want to achieve in Rahkine and nobody is prohibiting me,” said Meyer, speaking for the first time about his involvement in Myanmar. “Whenever I want to meet her to give feedback, I can. If she didn’t want to solve this, she wouldn’t have allowed me to continue.”

Even with space for civil society shrinking fast, critics jailed and the peace process stalled, loyalty to Aung San Suu Kyi within Myanmar remains steadfast. But her continued resistance, at the age of 73, to allowing anyone to emerge as her successor has made many outside the country worried for the future. For Rogers, this was also illuminating in terms of her mindset.

“I’m now beginning to wonder how much of her motivation in the whole struggle was truly for democracy and how much of it was more based around her own sense of destiny to do this as the daughter of Aung San, and for that reason she wanted to be in power,” he said. “I think that may be more of a factor than any of us had realised.”