Behind every great feminist woman there is always a great father, husband, brother or a son 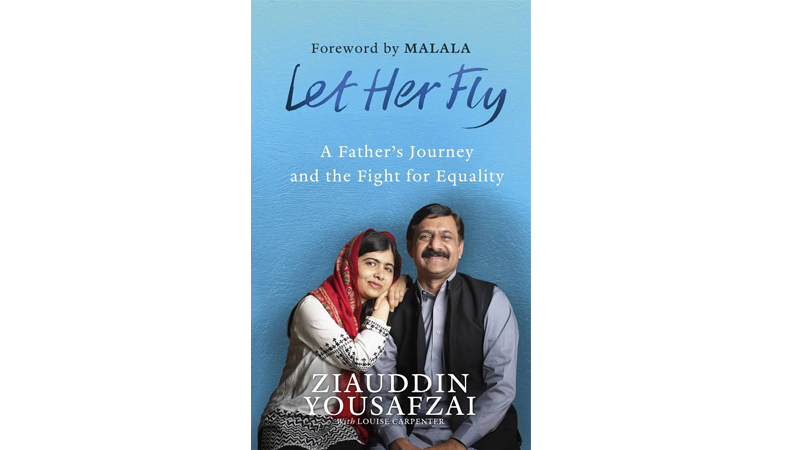 “I am from the land where women have served me all my life. I come from a family in which my gender made me special, but I did not want to be special for this reason.” That is the passage which immediately captures the mind of the reader to explore the facts beyond Malala’s life story that we already know and have read in her book, magazines or newspapers and has not been revealed to us before. The book ‘Let her fly’ beautifully written in simple English, tells us about the phenomenal journey of a man that how education played a pivotal role to transform his thinking for women and made him become a symbol of gender equality. Simply put, ‘Let he fly’ is an inspirational story of a proud father to fight the patriarchy in the remote areas of Pakistan, and to fight for their social existence in the society. This book also tells us a fact that the struggle of gender equality and women rights cannot be fought by women alone in the patriarchal societies like Pakistan. Zia shares his childhood memories that he was privileged to get the juiciest parts of the chicken and full-cream milk along with his brother and father on the table only because of his gender, while his five sisters would eat in a separate room along with their mother. Despite having harmony and love in the family, women were not allowed to even have food with men of their family or play any role in the family decisions. None of his sister or any female cousin studied in any school, and no one in his village ever thought that a woman should hold an equal position at least in a household. He describes his father being an educationist and a big advocate of education, but that advocacy was only for his boys. His mother would show him the big houses of wealthy people that it was education which changed their fate, but she never had the same thoughts for her daughters that they too hold the same rights. ‘Let her fly’ precisely narrates about the social and cultural ignorance of Pakhtun culture which is not related with Islam. Because Quran clearly instructs to all genders : “Recite in the name of your lord who created-96:2” to achieve education. Therefore, Zia confronts the ideology of Taliban that they blurred the real image of Islam to weaponise their own created ideology. That argument makes the book more interesting for the reader to distinguish the primordial and Taliban’s instrumental version of Islam, where culture also plays a vital role to keep women as an insignificant entity of the society.

He writes that his father was not a landlord or a rich man and for him education was the only key to open the doors of wealth and success. Zia was intelligent amongst all, hence they wanted him to become a successful doctor. However, he was bullied many times at school because of his stammering disability despite many failed exercises to overcome that weakness. He writes that his all five sisters were better than him as none of them stammered. However, none of them yet ever went to school, neither any of them ever demanded to go to school. Forced marriages were another norm of his culture, which gradually became the reason of his resilience against the patriarchy. He writes that his parents loved their daughters, but his mother’s only wish was to get them married as soon as possible.

Educating Malala became a mission of his life, he believed that she was special since her birth, he named her after a warrior, Malalai, and strongly believed that empowering Malala would make her a fighter to stand for girls education

Despite being bullied or being not able to speak fluently; Zia went to college. Studying at college became a source to open-up his life. He wanted to treat women as equal as like men, although he understood that in the patriarchal system the children especially girls were seen as possession of parents. Zia admits that the change in him was not sudden but gradual; which transformed him to fight for the gender equality and probably being a teacher instead of becoming a doctor was one of the reason. As an educationalist, he wanted to stand for the rights of his sisters, cousins and women of his life but couldn’t. He overwhelmingly writes that Malala was the first person of his life where he could really and truly start the journey of gender equality and women empowerment. Educating Malala became a mission of his life, he believed that she was special since her birth, he named her on a warrior Malalai’s name and strongly believed that empowering Malala would make her a fighter to stand for girls education.

Zia narrates that women were/are kept in houses like birds in a cage with clipped wings. His love for Malala was his dream of empowering girls and to fly on her own directions. His courage and passion for Malala’s studies was a taboo but he believes that it was the only education which eventually became the resilient power of his personality that he stood against the Taliban in 2009 for girls education. That was the time that even the state of Pakistan failed to establish the writ of the state in Swat valley. Hundreds of schools closed including his own school, and hundreds were killed resisting Taliban’s Islam in Swat valley. Zia was not fluent in speaking, but he spoke truth against the Taliban and raised Malala as a symbol of resilience for women rights and education, who also was as brave as like him and a true fathers daughter to fight Taliban.

From beginning till the end of the book, Zia believes that it was the education which changed him, but he forgets or maybe ignored to acknowledge that he was not the first man to achieve education in his area. His father was an educated man, and there must have been many others, but they only treated women as an object or like a non-existent entity in the social structure. What makes him special amongst all was actually well put by his own daughter Malala at the book launch ceremony, Methodist church hall, London on 10th November 2018. She said that Zia was a feminist even before knowing the meaning of feminism. The foreword is a beautiful gratitude of Malala towards her brave father and her first teacher. She calls him a dreamer of a Utopian world, where violence, hate, and gender inequality does not exist; and where Islam is only a religion of peace, tolerance and to respect women; and that is what we have found in the story of his life and so in the book.

Therefore, ‘Let her fly’ is a must read and must recommended book for everyone, especially a perfect gift for young girls and for those who believe that behind every great feminist woman there is always a great father, husband, brother or a son.