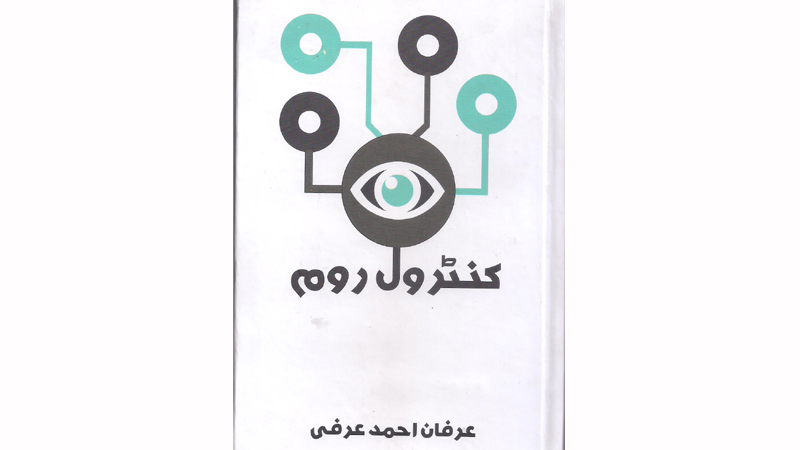 The first thing I noticed while reading Afsanas (short stories) of Irfan Urfi from his book Control Room is his capturing of situational beauty that has profound impact on the characters of his stories. The first story Aik Raat Yun Bhi Hua (it happened one night) is a story of a woman who is growing old in a house where she performs daily duties continuously without realising that her hair is gradually getting white. Her only contact with the outside world is through a window. Urfi description of this window as lifeline for the lady is remarkable. In the story, Bichri Hui Zindigi (long lost life), the author’s explanation of childhood turning into youth where all destinations in front of the character seem waiting with their heads bowed. Both stories revolve around unfulfilled desires of aging spinsters; one getting satisfaction with a visiting lady who spends nights with her and the other by losing her life in ailment. On this theme, the closest this reviewer can quote is Pakistani film ‘Baji’ in which Nayyar Sultana (baji) falls in love with a much younger Darpan who is in love with her sister Zeba. Rejected she sings Ab Yahan Koi Nahi Koi Nahi Aaye Ga, (nobody shall come here) developed by Ahmad Rahi on the last line of one of poems by Faiz.

Urfi pictures the locale of his stories in a beautiful manner. In the story Aasmaan Sei Sargoshi (whispering with the sky) he describes the desert landscape as about to be engulfed by the sky in its fist. The sun had receded like a wailing child, leaving a reddish yellow glow behind. That too was gradually getting beaten from the descending darkness of night. The nature was now full of night’s silence. A group had come here to stay in camps to construct a wall for protection. The narrator is uneasy all night; then he comes out of the camp only to witness loud blasts, a dust storm, fire and shrieking voices. Grey smoke had engulfed the air. He dreams of many people looking for their dear ones and seeking direction for further action. This horrible dream has been weaved by the story teller until the narrator is woken up by a colleague to get ready for the onward journey. He looks for the birds in the sky that would join the convoy with pebbles in their peaks but they were nowhere to be seen. Urfi does not write plain realistic stories; instead he portrays disturbed minds, troubled by surrounding happenings.

The story Chiriya (Sparrow) is about Shafi Muhammad who purchases sparrows from a market inside the city, puts them in a cage and sells them on the street to people on his bicycle. He is a hawker and would sell one sparrow for ten rupees and request the buyer to free it in return for the supplication by the freed sparrow in his favour. Shafi’s little daughter used to wait for her father’s return every evening, to take the cage on the attic to play with them. As she started growing, her interest in the caged sparrows started dwindling. Gosha, the street’s don used to look at her when she stood in the window. One day she went for an errand wearing burqa and Gosha asked her to follow her. In the rickshaw her clinging to him makes her feel safe. Suddenly her father passes by while loudly narrating his sales pitch, “Sparrows, 70 Hajj, 100 Umrahs, free the sparrow.” Gosha in his nervousness gave all the money he had to her father lest he noticed that his daughter was in the rickshaw with him. Then they proceed to a deserted corner of the park where Gosha “frees the hidden sparrow trapped inside the girl.” This story depicts the dilemma of poor families where girls desire to be free sooner than the natural course of life lest their fate becomes that of the first story’s charcter in this collection.

The story Diwaar (wall) surrounds the plight of a mother who loses her son to a female servant who satisfies him through her body. It reminds her of a story of Hindu visitors who asked for the sacrifice of a baby of the first woman setting foot on the boat Urfi’s stories mostly surround the plight of women in different roles in our society. He attacks and exposes taboos prevalent in the society he lives in.

The story Dhummmmm Restart is about a female student undergoing a medical checkup to identify possible mental disorders, particularly attention deficit disorder and hyper activity disorder. It is found that she is not suffering from these disorders but from a deficiency in the learning process and that too because of fear put in her head of unseen forces. This becomes an excuse for the young girl to seek escape from reality. So what needed to be done was to refrain from talking about daily affairs. Urfi suggests ‘Restart, Standby, Shut Down’ formula to be used. This story probably hints at the negative impact of many prevalent socio-political disorders in a growing mind.

The story Doosra Din (second day) is the seventh story in the collection and is based on the carelessness of a girl right from her childhood in mixing with family and friends. As a grownup she is all the time compared with the neat and clean and socializing habits of her elder sister. As a result she starts avoiding her brothers/sisters company. The elder sister gets married and is seen in new dresses and holding her new house’s keys like her mother did all her life. The younger sister also starts asking to be married. Fed-up, her mother marries her to a man that lives far away. On the wedding night when strange hands started exploring her body, she is repelled and throws her husband out of the bedroom, the following day echoes of her brothers saying that she would return the second day start resounding in her mind. In the West, schools teach informative classes on sex education, because abstinence only education has been repeatedly proven ineffective. In the East this education is considered a social taboo,.

There are thirteen short stories complied in Control Room (I keep on wondering about why Urfi choose this particular title for the book). In the story Reality Show, I shall be borrowing comments published in a local daily from Karachi that state: Reality Show highlights the horrors of extremism employing modern-day self-centeredness associated with the world of communication – theater, television etc.