Trilateral dialogue terms CPEC a harbinger of peace in region 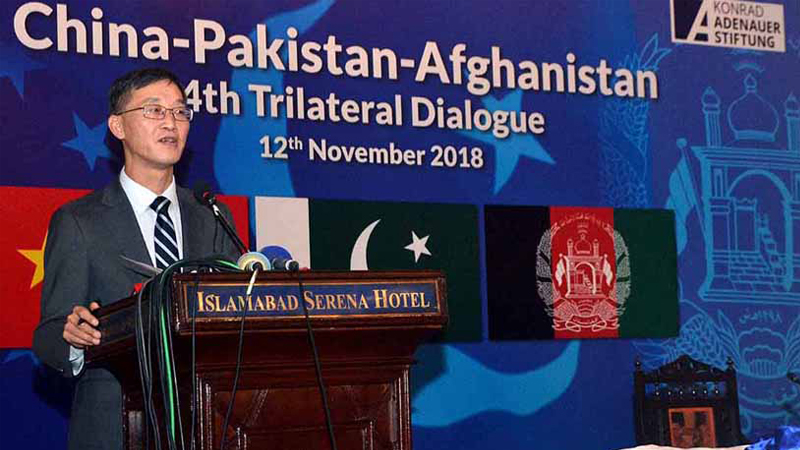 ISLAMABAD: A trilateral dialogue held here on Monday termed the China-Pakistan Economic Corridor (CPEC) as harbinger of peace and stability in the region.

The fourth trilateral dialogue between China, Pakistan and Afghanistan was hosted by the Pakistan-China Institute (PCI) with the theme of ‘Economics, Culture and Connectivity in Light of CPEC’. The key note speeches were delivered by Ambassador of China in Pakistan Yao Jing and Ambassador of Afghanistan in Pakistan Omar Zakhilwal. The event was attended by a huge number of representatives of think-tanks, university professors, students and parliamentarians.

In his inaugural speech, Pakistan-China Institute Chairman and Chairman of the Senate Foreign Affairs Committee Senator Mushahid Hussain Sayed said the 21st century is the ‘Century of Asia’, adding that with decline of the West, the ‘Greater South Asia’ has emerged as a geo-economic concept driven by economy, energy, roads and railways, ports and pipeline, making Pakistan a hub of connectivity due to CPEC.

He said CPEC is not only about Pakistan and China alone, rather it is about regional connectivity and Afghanistan is a natural partner in CPEC’s expansion. “Our focus should be culture, corridors and connectivity rather than conflicts or confrontations,” he added.

Ambassador of Afghanistan in Pakistan Omar Zakhilwal said there is a lack of understanding in terms of development as bilateral relations as well as multilateral relationships between countries are based on security rather than economic development. He said as an economist by profession, he believes that there must be a line drawn between economics and politics in order for all partners to integrate in the regional connectivity.

The ambassador said that Kabul supports CPEC and its expansion into Afghanistan as it will develop the country internally as well as strengthen the international relations between the countries in the region.

Ambassador of China in Pakistan Yao Jing highlighted the inclusive nature of BRI and CPEC and stressed that all the countries in the region should have a similar chance of availing opportunities. He said Afghanistan has a geographical importance as it is a bridge that connects East Asia with West Asia. He stressed that China is playing its part in facilitating peace in Afghanistan.

The dialogue included three detailed panel discussions titled ‘BRI/CPEC and Potential for Cooperation between Afghanistan and Pakistan’, ‘Regional Connectivity through Cultural Corridor’ and ‘The Way Forward’. The panel comprised high profile speakers who provided their valuable input during the discussions.

The closing remarks were delivered by Mustafa Hyder Sayed, executive director of PCI, wherein he stressed the need to connect culturally, enhance trade and engage in a constructive dialogue. “We need to go beyond the prism of proxies and geopolitics and participate in connectivity and regional cooperation,” he added.

The dialogue was organized in collaboration with Konrad-Adenauer-Stiftung (KAS), followed by an interactive question and answer session.