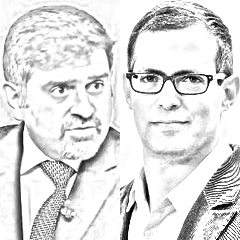 Pakistan and the Israeli-Palestinian conflict

If Saudi Arabia has altered its position because of its own national security concerns, what is stopping Pakistan from doing the same?

Rumours about a secret Israeli visit to Pakistan have triggered a rare debate in the Muslim-majority South Asian nation about the pros and cons of relations with the Jewish state. These come as Israel’s Prime Minister Benjamin Netanyahu, in a dramatic development, visited the Persian Gulf state of Oman. If it is true that Israeli officials met with their Pakistani counterparts in Islamabad, then that would be a hugely significant geopolitical development. But even if it’s just a rumour it has provided us with the opportunity to publish this piece that we have been holding back on for nearly over a year.

As a nation founded on a Muslim identity Pakistan was bound to be deeply sympathetic to Islamic causes around the world. In particular Pakistanis have had a strong emotional attachment to the Palestinian struggle for self-determination. As a result, and like many of their Arab and Muslim brethren Pakistanis view Israel as the enemy. Geopolitics, however, is anything but an emotional exercise; rather it is the art of skilfully pursuing the national interest.

For the past seven decades Pakistan has supported the Palestinians without Islamabad actually doing much for their occupied brethren. A lot has happened over the decades, however, Pakistan’s policy on the Israeli-Palestinian issue remains frozen in time. Many Arab and Muslim states have assumed a pragmatic attitude towards the issue. Islamabad, however, has not realized that not only has it fallen behind the curve in terms of the ground realities in the Middle East, it is also not being mindful of the emerging realities in its own South Asian milieu.

The Muslim-majority South Asian nation does not really compute in the Israeli strategic calculus. There are far too many threats in its immediate strategic environment for Israel to be worried about Pakistan. The same is true for Pakistan, which has way too many issues to deal with in its proximate environs that do not allow it to worry too much about what is happening on the Israeli-Palestinian front

A lot has to do with the conspiracy theory worldview among Pakistanis of a “Zionist-Hindu-Crusader” plot to undermine their country. There is, however, no evidence that Israel has ever acted against Pakistan. Before you say Bokhari and Libel are ignoring Israel’s relationship with India we would like to point out that that does not count. India might be able to leverage from its relationship with Israel against Pakistan but the Israeli motivation for forging ties with the Indians is very different. At a time when Israel faces growing international opposition from the world over for its occupation of the Palestinian Territories, it needs all the allies it can get and close relations with the world’s soon to be most populous nation is something that the Jewish state will logically pursue.

Israel’s efforts to forge close relations with India have very little (if at all) to do with Pakistan and Israeli prime minister Benjamin Netanyahu’s 6-day trip to India earlier this year in January must be seen in this context. The Muslim-majority South Asian nation does not really compute in the Israeli strategic calculus. There are far too many threats in its immediate strategic environment for Israel to be worried about Pakistan. The same is true for Pakistan, which has way too many issues to deal with in its proximate environs that do not allow it to worry too much about what is happening on the Israeli-Palestinian front.

But the most important thing is that Israel is not the one shunning Pakistan. It is the other way around. It may have made sense in the decades past for Islamabad to ignore the State of Israel — in symbolic solidarity with the Palestinian people. But it is high time that Pakistan re-examine its stance and assess how does its stance benefit the Palestinians and much more importantly what does Islamabad gain vis-à-vis its own national interest. Let us first examine the former.

Pakistan’s non-recognition of Israel has not helped the Palestinians. This is especially the case when Muslim powers (who happen to be close allies of Pakistan) with a much greater stake in the Israeli-Palestinian conflict either have formal diplomatic relations with Israel or are in the process of doing so because it is in their national interest. Turkey, which is the most powerful country in the Middle East has had diplomatic relations with Israel for almost as long as the existence of Pakistan as a sovereign state. The largest Arab state Egypt normalized relations with Israel since the 1978 peace treaty.

Likewise, in 1994, Jordan formalized its long behind the scenes relations with Israel. Anymore, Pakistan’s closest Middle Eastern ally, Saudi Arabia, an otherwise ultra-conservative religious polity, is also openly moving towards a relationship with the Jewish state. The common denominator in all of these relations is that they have been forged on the basis of their respective national interest and not some vague notion of pan-Arab or pan-Muslim solidarity. This does not mean that these countries have thrown the Palestinians under the bus.

In fact, their stance towards Israel stem from a realisation that if they are going to be able to make a difference for their brethren who have long been suffering under occupation it will not come through boycott. By having relations with Israel, they have a seat at the table and can do much more for the Palestinians. What they have actually been able to do is another story and again a function of their national interests. Being far and away from the Palestinian conflict zone it makes even less sense for Pakistan to maintain what is clearly an outdated policy that offers no utility.

On the contrary, Pakistan has a lot to lose from not having ties with Israel. Netanyahu’s visit to India speaks volumes about this. Considering that Pakistan’s national security doctrine is heavily India-centric, Islamabad cannot afford to allow New Delhi to monopolize the relationship with Jerusalem. In all fairness, under the Musharraf regime, the Pakistanis did reach out to the Israelis when then foreign minister Khurshid Mahmood Kasuri met with his Israeli counterpart, Silvan Shalom in Ankara — a meeting facilitated by the Turkish government. Nothing became of that diplomatic encounter given that the Pakistanis did not want to be out of step with the “Arab/Muslim consensus”.

A decade or so later the circumstances have shifted not only in the Middle East but also for Pakistan within South Asia. Relations with the United States have sharply deteriorated, which India is feverishly working to benefit from. Pakistan is thus being forced to diversify its foreign policy portfolio. Logic thus dictates that Pakistan should re-examine its attitude towards Israel.

We recognize that this re-examination will be excruciatingly difficult for Islamabad given the rise of the religious Right in the country, especially its violent strain. But it is not an impossible task. The country’s political and military stake-holders will need to make a national case that it is in the interest to move past an irrational policy that has neither benefited Pakistanis nor their Palestinian brethren. Normal diplomatic relations take time to develop and the two sides may not get there for a very long time to come.

However, the process by itself can be beneficial to Pakistan. It can go a long way in countering the negative international perception (especially in Washington) that the South Asian country’s policies are informed by extremist Islamist ideas. A channel of communication with Pakistan will mean that Israel will not expand its relations India without factoring in Pakistani concerns. For Israel, a relationship of sorts with a major Muslim nation is of immense value. By being at the table with Israel Pakistan will also be able to influence Israeli policies towards the Palestinians — something that Islamabad has never been able to do due to its rejectionist attitude. Millions of Pakistanis desirous of pilgrimage to Masjid al-Aqsa and have never been able to underatake could do so if Pakistan had a working relationship of sorts with Israel.

We realize we are suggesting a radical policy shift — one that the Pakistanis may not be prepared for — at least not for some time to come. What is clear though is that Islamabad’s historic position has neither helped Pakistani national interests nor improved the situation for the Palestinians. If Saudi Arabia has altered its position because of its own national security concerns, what is stopping Pakistan from doing the same? Fortune favours the bold!

Dr Kamran Bokhari is a Washington-based national security and foreign policy specialist with the University of Ottawa’s Professional Development Institute and tweets at @KamranBokhari. Dr Tamir Libel is a Germany-based Israeli scholar on security studies and until recently a research fellow at the Barcelona Institute of International Studies (IBEI) and tweets at @drtamirlibel