Begum Kulsoom passes away in London

* Shehbaz and his son Hamza will fly out to London to bring back the body for burial at Jati Umra
* PM, president, COAS, Bilawal and Indian premier Modi convey condolences to Sharif family 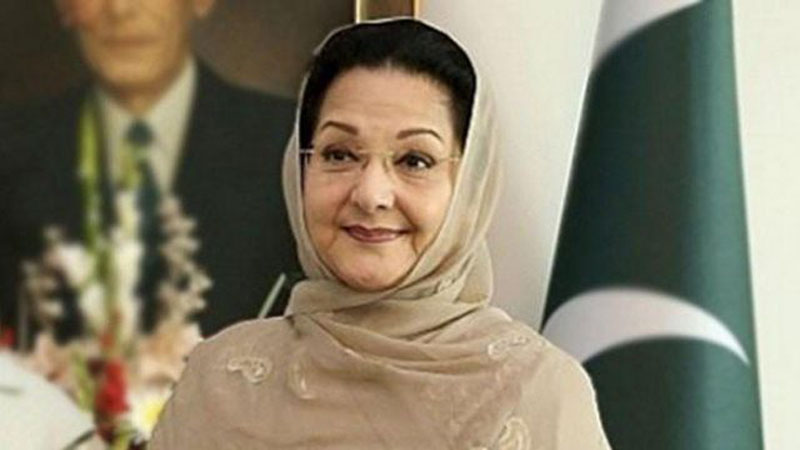 Begum Kulsoom Nawaz, the former first lady of Pakistan, passed away in London on Tuesday after fighting throat cancer for over a year.

She remained in a coma for several months and was also put on life support during treatment for lymphoma, which was diagnosed barely a month after her husband three-time Prime Minister Nawaz Sharif was removed from office by the Supreme Court of Pakistan following an accountability trial over his family’s foreign properties.

While Nawaz and his daughter Maryam Nawaz remain imprisoned at Adiala Jail, Pakistan Muslim League-Nawaz leadership, including party president Shehbaz Sharif and his son Hamza Shehbaz, will fly out to London to bring back Begam Kulsoom’s body for final rites and burial at the family’s estate in Lahore’s Raiwind suburb.

The father and the daughter will be released on parole to join the burial rites.

In a statement following the announcement of Begum Kulsoom’s death, Prime Minister Imran Khan offered condolences to the family and ordered the Pakistani High Commission in London to provide all the necessary facilities and cooperation for the return of the body.

Nawaz was in London with Kulsoom earlier this year when the anti-corruption court handed him a 10-year jail term and sentenced Maryam, to seven years in prison over the purchase of luxury flats in London in the 1990s.

The father and daughter left her bedside to return to Pakistan to rally their followers ahead of July 25 elections. Both were arrested on arrival and have been imprisoned since.

The Harley Street Clinic has issued a certificate of death, or free from infection (FFI) certificate, that has paved the way for the body to be flown out of the UK.

Begum Kulsoom is survived by her husband and four children Maryam, Asma, Hassan and Hussain.

She was born in 1950 and was the granddaughter of renowned weightlifter Ghulam Muhammad, popularly known as Gaama Pahelwan. She received her early education from Lahore’s Madrasa-Tul-Banat and later enrolled at the Lady Griffin High School. For her undergraduate, she attended the Former Christian College in Lahore, and then completed a masters degree at the Punjab University. She was still studying when she married Nawaz Sharif in 1971.

Following a well established tradition in Pakistani politics, Begam Kulsoom led the PML-N from the front after her husband’s government was dismissed in 1999 by then army chief Pervaiz Musharraf. She served as the president of the PML-N from 1999 to 2002. Begum Kulsoom and Maryam were also placed under house arrest after the government’s dismissal. Over the course of Nawaz’s political career, Begum Kulsoom remained by his side, correcting him on several occasions and urging him to push boundaries on others. One such occasion was shared by activist Farooq Tariq on social media. He tweeted that Begum Kulsoom had played a vital role in the safe return of six bloggers who went missing last year. For a brief period during her illness from September 2017 to earlier this year, she had remained a member of the National Assembly after she won a by-poll on a seat vacated by her husband following his disqualification on SC’s directive.

In a statement, PML-N president Shehbaz Sharif said the party and Pakistan’s democratic process were indebted to Begum Kulsoom. “An era has come to an end,” he said, adding, “She played an exemplary role as a mother, sister, daughter and wife.”

Indian Prime Minister Narendra Modi also expressed profound grief over the demise of former first lady. “It is with profound grief that I learnt of the sad demise of Begum Sahiba,” Modi said in a letter written to former premier and Pakistan Muslim League-Nawaz (PML-N) supremo Nawaz Sharif.

“I pray to the Almighty to grant eternal peace to Begum Sahiba and strength to you and the bereaved family to bear this irreparable loss,” the letter read further.

“I would always cherish memories of my interaction with her.” Pakistan Tehreek-e-Insaf (PTI) Senator Faisal Javed said: “Deeply saddened to hear the news of Begum Kulsoom Nawaz’s passing. May Allah rest her soul in peace and give enough strength to family to cope with this huge loss.” Chairman of the PML-N Raja Zafar-ul-Haq said he is with the Sharif family in this difficult time.

Senate Chairman Sadiq Sanjrani sent his condolences as well. “May the departed soul have eternal peace,” he said.

“My condolences to the Sharif family on the sad demise of Begum Kulsoom Nawaz,” he said. “May Allah grant her eternal paradise and give her loved ones the strength to cope with the tragic loss, Ameen. Expecting early bail on humanitarian grounds for Mian Nawaz Sharif, Maryam and Captain (Retd) Safdar,” he posted. Chairman of Pak Sarzameen Party (PSP) Mustafa Kamal said, may her soul rest in peace. “We surely belong to Allah and to Him we shall return.Very sad to hear about the demise of Kulsoom Nawaz Sahiba. May Allah rest her soul in peace and give her highest place in Jannah. My heartfelt condolences with all the family members,” he wrote.

German Ambassador to Pakistan, Matrin Kobler offered his heartfelt condolences to Kulsoom Nawaz’s family and friends. “May her soul rest in peace,” he tweeted.

Former MNA and PML-N leader Tehmina Daultana said that Kulsoom Nawaz was their leader and she was praying that the former first lady would recuperate.

Tehminda Daultana said that Kulsoom wasn’t only Nawaz’s wife, but she was quite active in the party too.