* In his inaugural address, Imran Khan unveils roadmap to fulfill promises he made during the election campaign 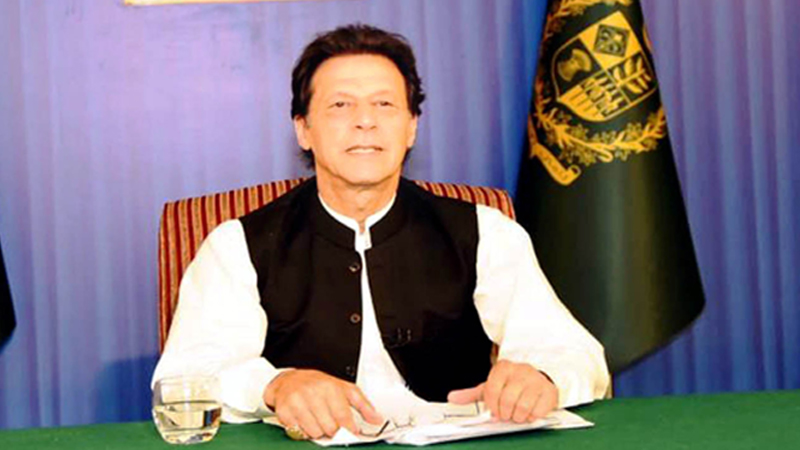 ISLAMABAD: In his inaugural address to the nation since being elected as prime minister of Pakistan, Imran Khan Sunday unveiled a roadmap his government would be following in the days ahead to fulfill his promise of creating a ‘Naya Pakistan’.

Imran Khan, who swept to power in last month’s election on a populist platform vowing to root out corruption among a venal elite and lift people out of poverty, vowed to make Pakistan an Islamic welfare state, and requested the masses to bring change in their lives. “Country will head towards disaster if we don’t change our direction,” he said in his address broadcast live by state-run PTV.

The prime minister said he will follow Medina’s example to rid Pakistan of its chronic problems. “They did not borrow from Roman or Persian empires. They strengthened the people and made them self-sufficient,” he added.

Promising wide-ranging reforms with a focus on safeguarding Pakistan’s resources and their redistribution among the disadvantaged, the prime minister urged the nation to play a more proactive role in the rebuilding process. “I need your help,” he said. “When you are being robbed, you don’t wait for the police to come. You nab them and hand them over. [Similarly], you should help me catch the robbers of the nation. This is the social media age. Keep check and report such people. We have to act as a team. Help me protect your money,” he added.

Identifying Pakistan’s challenges, Imran said the foremost on his mind are Pakistan’s debt liabilities. “Never in Pakistan’s history have we faced such a difficult economic circumstances,” he said. “Our debt burden now stands at Rs28 trillion. The interest that we have to pay on our debt obligations too has reached levels where we have to take on more debt just to settle it,” he said.

Pledging to begin accountability from himself, the prime minister announced that rooting out corruption will be a high priority for his government. “I will meet the NAB chairman and facilitate him with whatever he needs,” he said. “We will enact a law for whistleblowers like we did in Khyber Pakhtunkhwa. Whoever helps identify corruption will get a share of the money that we recover. The SECP will be fixed on a priority basis. The FIA will also be fixed,” he added.

Detailing his plans to cut down country’s expenditure, the prime minister said, “I will keep only two people with me out of the [prime minister’s staff of] 524. I will be staying in a three-bedroom house that served as the military secretary’s house.

I will have to keep two of the cars because intelligence agencies say my life is under threat. We will be auctioning off all the other bullet proof cars. I invite businesses to come and buy them. We will put the proceeds of that auction in the state treasury.I also wish that all the governor houses are kept as simply as possible. I further wish that the PM House will be turned into a university. It is in a great location to be one,” he said, adding that a committee under Dr Ishrat Husain will figure out how to cut the expenses nationwide.

On reforming the financial sector, Imran Khan said that instead of trying to rebuild the economy via external loans, his government will try and fulfill its needs from within. “No country can succeed by taking on debt again and again,” he said.

“We also need to pay our taxes. I am going to fix the Federal Board of Revenue on a priority basis. It has lost its credibility and that is why people don’t pay taxes. There needs to be progressive taxation which helps in providing basic amenities to people of low-income levels. I will promise my people that I will protect your tax money and spend it on you,” he said. “We are raising a task force to repatriate the wealth looted from the country. We need to put an end to money laundering. It is our biggest problem right now. We need to boost our exports. How will that happen? We will need to help export industries. We have made a business advisory council to help address their challenges,” he revealed.

Imran said more than 20 million children were not going to schools in the country, adding that his focus will be to improve public sector educational institutions as well as the madaris. “We need to make sure our government schools are good enough that everyone can send their children to them. This is an emergency,” he said, adding, “We also cannot leave madrassah students behind. They too should become engineers and doctors and generals. Why do we not give them the opportunity?” he asked.

Stressing the need to fix the healthcare system, the prime minister said fixing the pre-existing system is a very tough job. “It takes a long time: the Khyber Pakhtunkhwa health system did not start showing results till the fifth year. But we still need to do it,” he added.

Sharing his reforms plan in detail, the prime minister said he will enforce meritocracy to improve civil service. “We will not tolerate any political interference in anyone’s appointment. I just want people ready to work for the nation,” he said, adding that Dr Ishrat Hussain is forming a committee to bring the merit back.

Imran said he will seek Chief Justice Mian Saqib Nisar’s help to revamp the entire judicial system. “We have a massive backlog of cases. We will sit with the chief justice and discuss how we can ensure that cases can be wrapped up within a year,” he added.

The prime minister said he has asked former KP IGP Nasir Khan Durrani to implement the KP police model in Punjab. “We won the election in KP because of how good our police had become. The former IGP, who oversaw those successes, has been asked to help fix the Punjab police and he has agreed,” he said.

Imran Khan stressed the need to transfer the power to the local government, saying, “Power must be given to the bottom-most tier. Nazims will be directly elected in districts, while checks and balances will be kept,” he added.

On water crisis in the country, Imran said new dams need to be built to resolve the issue. “A ministry will work towards saving water. New methods will be taught to farmers. Canals will be lined to save water, while the Bhasha Dam will be constructed at all costs. It’s a commendable initiative started by the chief justice,” he added.

The prime minister said that jobs will be given to the country’s youth. “A big project of housing will be started. It will be a one-window operation to create jobs and [to boost] industries. The youth will be given loans without interest so they can become entrepreneurs.”

The prime minister reiterated his promise towards creation of a province in southern Punjab. “Law and order, garbage, water and other problems in the city need to be solved,” he said on Karachi.

On the international front, Imran said, “I have spoken to all of Pakistan’s neighbours to improve relations with them. There is a need for peace and without it, we cannot improve the country’s situation.”