The performance room of Olomopolo had a houseful again and this time it was a joyous occasion. Olomopolo celebrated its fifth birthday at the Olo Junction in Muslim Town Lahore by organising a reading of literary texts in Urdu.

In the center of the performance area were three sofas, complete with cushions. The side tables had lamps and water glasses. Behind the sofas were small candles that lit up the space further. And on the left side of the stage was a carpet with cushions, a sitar, and two tablas.

The first poem “Sadaa Ker Chalay” was written by Asad Fatmi and recited by Tajdar Zaidi. The poem was sensitive and set a lyrical mood for the evening.

It was poet Gulzar’s birthday on Saturday and Sarmad Khoosat recited the poem “Diary Ka Aik Montage”. The poem is about an unknown daily wage worker locked in a city and reminiscing about his romantic past in the village

Khoosat read “Basauday Ki Maryam” by Asad Muhammad Khan. The story revolves around Maryam, traditional ayaa or nanny of olden days who is considered a part of the narrator’s family. Maryam is a depiction of the traditional old Muslim woman in our culture, who has simplistic ideas about Islam, whose greatest desire in life is to perform Hajj. She collects the money for it over the years but has to spend it on her ill son’s health. The son dies and eventually, so does Maryam.

Despite its seriousness and gravity, the story is heartwarming and at times hilarious. It reminded one of the love and respect shared by family members in the past. Maryam’s simplicity and blind faith in Islam are rare now. The story is written by Asam Muhammad Khan who is originally from pre-partition Bhopal and currently lives in India. His language was so demonstrative that every scene and character came alive for the audience. Khoosat narrated it with all his heart and talent. 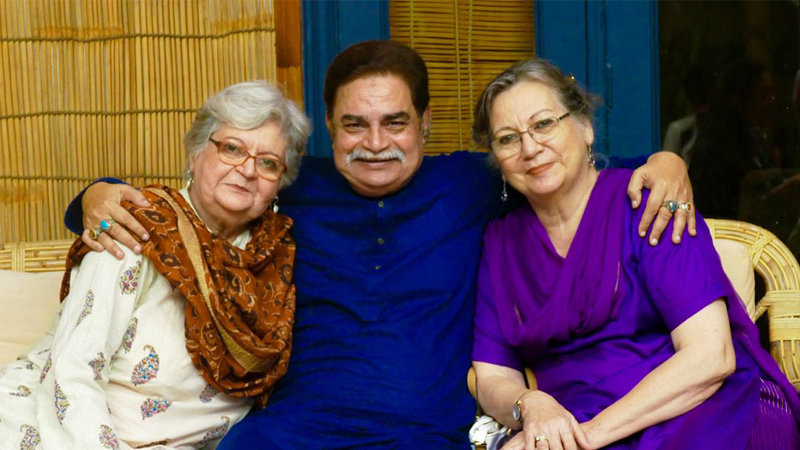 Irfan Khoosat narrated the short story “Aik Nujoomi” by Shaukat Thanvi. The story is about a man whose astrologer predicts that something with the alphabet “B” or “bay” in Urdu will kill him. The man starts avoiding everything with “b” in it. He goes as far as to avoid calling his son and daughter “beta” or “beti”. The dates “bara” (12th), “bees” (20th) and “Bais” (22nd) make him uncomfortable as do “bara baje” (12 o clock) in the day and night.

The story is hilarious and Khoosat candidly expressed the protagonist’s idiosyncrasies by emphasising on the letter “B” in everything. The crowd was in stitches almost throughout the performance.

Tajdar Zaidi has a very deep and expressive voice. He recited a letter by Faiz written to his wife Alice Faiz from jail and a poem by Ibn-e-Insha titled “Tu Kahan Chali Gayee Thee.” The letter by Faiz included some mundane details of his life in jail- like eating all the paan sent from home or trying to get a specific dictionary. But he also describes the last days of an injured bird and how humans need to learn to just be happy.

It was poet Gulzar’s birthday on Saturday and Sarmad Khoosat recited the poem “Diary Ka Aik Montage.” The poem is about an unknown daily wage worker locked in a city and reminiscing about his romantic past in the village.

The three performers recited Noon Meem Rashid’s “Zindagi Se Darte Hu” together. The evening’s final performance was by Irfan Khoosat who recited Saaen Akhtar Lahori’s Punjabi poem “Allah Miyan Thallay Aa.” Lahori was a Punjabi folk singer against whom a fatwa was issued for writing this poem which appeared blasphemous to some.

The poet talks about the suffering of women, their helplessness and society’s discrimination against them. He mentions their abductions by landlords, their suffering at home, in poverty and as mothers – and repeatedly asks God to come down to Earth and see it for himself. 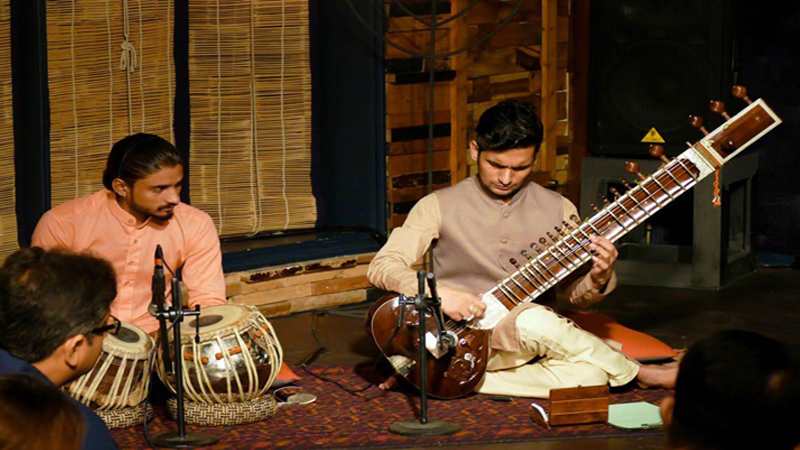 Some of the readings were separated by musical presentations. Wajih Nizami played Aye Ri Sakhi, Jog, and Hans Dhun on his sitar.

At the end of the reading, everyone was invited to the backyard, where a very interesting chocolate cake with a red lower half awaited us. We were served some lemonade, juice made from plums, kebabs, and bread with beef slices on it. The Olomopolo teams that include Kanwal Khoosat, Erum Sana, and Asil Baqa were greeting and serving the guests. Since it was a special birthday celebration, it was also star-studded.

Salima and Muneeza Hashmi were present along with actress Nadia Afghan, architect Parvaiz Vandal and his wife. Kathak artist Nighat Chaudhary also arrived at the end of the celebration.

Olomopolo has brought a string of amazing performances that include theater plays, stand-up comedy and readings like this one. They have also given many young artists, directors, and writers a platform to perform.