Shikarpur’s Ghanta Ghar is having a rough time 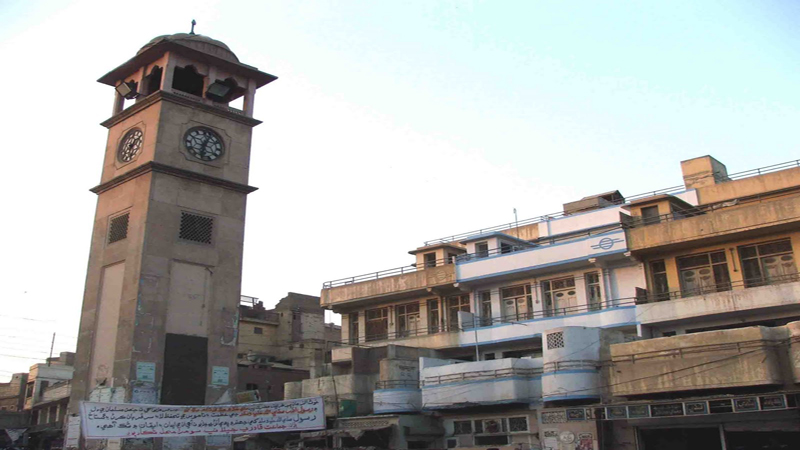 SHIKARPUR: Fast forward to today and the historical landmark of Ghanta Ghar (literally, house of the bell) in Shikarpur still stands tall, marking the center area of the city.
Ghanta Ghar was helping weary travelers reach their destinations on time since 1935 until recently when arms of its clock stopped working, and begged for the attention of the government, which has yet to fix it.

The later construction of commercial buildings attracted businesses to the area, and so less attention was paid to repairs and maintenance.
According to the pink and famous inaugural stone, especially brought from Jai Pur town of Rajasthan by Bijaj family, placed at the base of the tower, Ghanta Ghar was built by Seth Kunia Lal Bajaj and Seth Raja Ram Bajaj in memory of their late father Seth Heranand Nandhiram Bajaj in 1935 under the supervision of the municipal committee of Shikarpur.

The construction work started on May 6, the eve of silver jubilee of George Frederick Ernest Albert V, the Emperor of India, who celebrated the event across the subcontinent.

They donated Rs 5000 to the committee whose chief officer K.V Joshi and the administrator H.N. Meensis supervised the whole construction work.
It was a precious gift to the residents of Shikarpur.

Located in the city centre, Ghanta Ghar marked the gateway at which people from other cities and suburbs of Shikarpur would gather before entering any of the markets located nearby. The clock used to chime at every hour, the sound reverberating throughout the city, especially at night when there was less traffic on the roads. In the early 1950s, many shops were built around Ghanta Ghar, which were allotted on monthly rental basis, particularly Achar (pickle) and Pan Shops.
Later, the Shikarpur deputy commissioner Muhikumuddin Qadri cancelled their allotment, and restored the earlier condition of the clock tower.

The political and religious parties used the tower as a notice board by sticking Pena flex, banners and hand bills to inform about their upcoming events, protests or other programmes.
Recently, the Endowment Fund Trust [EFT], a trust preserves the heritage of Sindh, took notice of the dilapidated condition of the tower and renovated it, but its clock was not repaired.

Moreover, the Bijaj family built a primary school, a guest house and many other structures in Shikarpur, but migrated to India after the partition of subcontinent in 1947, leaving many precious memories behind.
Haseeb Nayab Mangi, a prominent Sindhi writer, said that these buildings were our national assets, and it was our prime responsibility to preserve them for next generations, or otherwise, history would not forgive us.

Youth killed over old enmity between Qambrani and Marfani tribesmen in Shikarpur
A youth was shot dead by two unidentified motorists on Sunday over an old enmity between two groups of Qambrani and Marfani tribesmen at Dakhan Naka near Shahi Bazar in Ghari Yasin, a town of Shikarpur district.
Reportedly, the Marfanis and Qambranis have been at war for 15 years now, due to which 100 people from both tribes have been killed.

According to the police sources, the assailants opened fire on 30-year-old Dilbar when he was present in a shop, and managed to flee from the scene.

The area police rushed to the spot, and shifted the deceased’s body to the Taluka Hospital Ghari Yasin for autopsy, and later handed over to his relatives.

Earlier, an armed clash between two rival groups of Teghani and Bijarani tribes killed at least eight people and injured two children at the riverine area of Khanpur tehsil in Shikarpur.

The administrative authorities and police officers need to adopt effective measures to overcome deadly clashes between several tribes in Shikarpur.