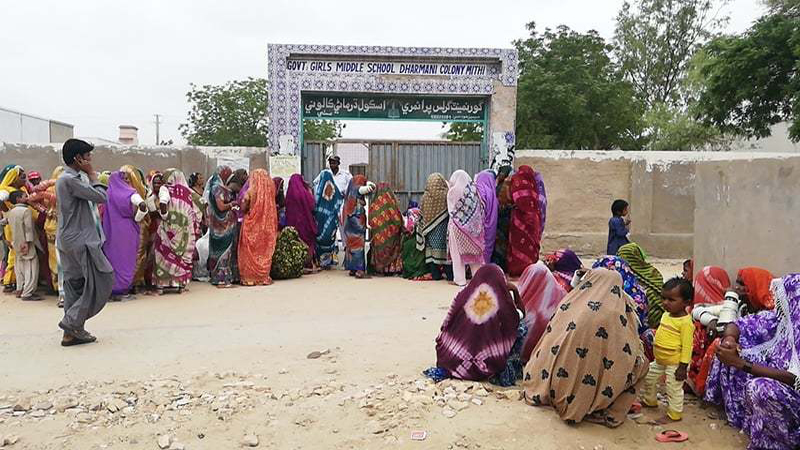 Thari women have made a record with the astonishing number of voters in last week’s general elections, it emerged on Sunday.

Nowadays, people believe that vote is the only way to support democracy and to demand for rights, and to take action against the attack on human security, but the surprising participation of Thari women in general election 2018 is outstanding.

Their contribution proved that this is a way to come forward and express the existence of local survival. According to the reports and details shared by Election Commission of Pakistan (ECP) and District Returning Officer (DRO) Tharparkar that Thari women have left previous record back by making excellent performance in last week’s general elections. The two constituencies of remote backward area of district Tharparkar NA-221 and NA-222 touch the highest peak of voter ratio overall in Pakistan.
Meanwhile, across Pakistan, NA-221 is the only constituency in the country which possesses the highest number of women voters, and in NA-222 Tharparkar –II the number of women voters were counted as 71.40 percentages.

It has also been observed that people from far-flung areas of district, Tharparkar come to their constituencies to cast vote rather than thinking aboout unavailability of drinking water, source of communication and access of transportation.
HR Activist Bharat Shivani shared that it is the time to give feedback and due respect to voters that are coming from far just to perfrom their civic duty. Thari Varsha expressed that lets wait and watch how stakeholders and political parties are in the favour of their manifestoes, either it was just political statements to gain the attention of audience or they are really willing to coordinate with the voters.

Sameena, a housewife, stressed that in election campaigns and door to door knocking by politicians, the strategies were addressed as they are supporting females by giving Benazir Income Support Program (BISP) card. They said that if people will give them a chance once again, then they will issue more amount.