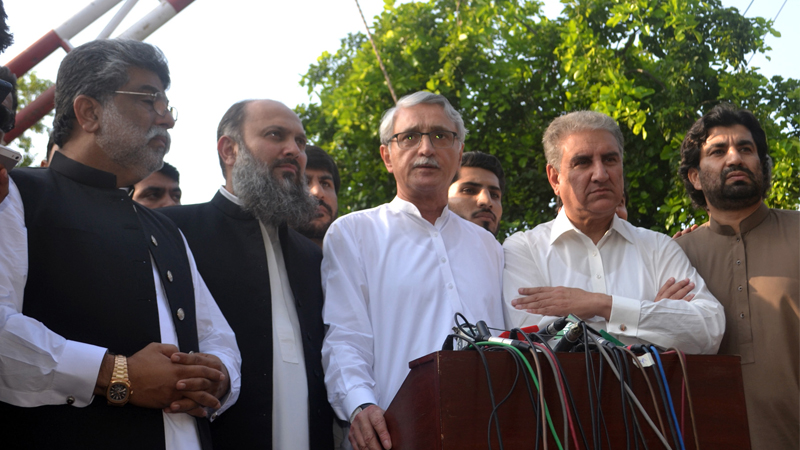 The Balochistan Awami Party (BAP) and the Pakistan Tehreek-i-Insaf (PTI) have agreed to form a coalition government in Balochistan. BAP chief Jam Kamal will be the candidate for the chief minister’s office.

The announcements were made a joint press conference in Islamabad on Tuesday.

Speaking on the occasion, PTI leader Jahangir Tareen said, “BAP has won 15 provincial seats in Balochistan and since then, four independent candidates have joined them. We [the PTI] have five seats and together our count has gone up to 24.”

On Jam Kamal’s name as the chief minister, Tareen said that it was BAP’s right to pick the CM since it was the majority party in the House. “BAP has the majority in the province and it has the right to choose the chief minister. The party has nominated Jam Kamal sahib and the PTI fully supports him as the candidate for Balochistan CM,” Tareen said.

BAP leader Jam Kamal said that his party had offered unconditional support to the PTI, adding that the two parties would work together in Centre and the province.

Muttahida Majlis-i-Amal chief Maulana Fazlur Rahman said on Tuesday that Pakistan Tehreek-e-Insaf (PTI) chairman Imran Khan should follow through on the promise made in his victory speech, and ensure investigation of rigging claims in all constituencies.

Speaking to the media after a session of the MMA leadership, Fazl said that the government should be formed in the Centre only after a thorough probe of rigging claims across the country.

Among other things, he said the verification of thumb impressions on the various forms maintained by the polling staff on the Election Day should also be ensured.

“The PTI has emerged as the largest political party as a result of rigging. It should refrain from forming a cabinet before the prime minister is elected because it still does not have the required majority,” he said, “When PTI does not have the majority, other parties have the right to attempt to form the government.”

Rahman accused the PTI of engaging in ‘worst horse trading in country’s history’. Revising his earlier stance about the boycott of the Parliament, Fazl said that his party would discuss Jamaat-i-Islami’s (JI) suggestion that elected MMA members should sit in the NA in the second round of talks at the forum of the All Parties Conference (APC). He urged workers of MMA parties to continue their protests against rigging, adding that a call for a nation-wide protest campaign would be given after the next APC.

Responding to the ECP’s press talk, Fazl said that the commission should accept that it had been unable to perform its constitutional duty. He categorically dismissed the commission’s claim that July 25 elections were free and transparent.

The Balochistan National Party-Mengal (BNP-M) has demanded the formation of an independent commission to investigate allegations of rigging.

The demand was made by BNP-M chief Akhtar Jan Mengal at a press briefing in Quetta on Tuesday.

He said that the party’s mandate was stolen through rigging on the polling day in at least 12 constituencies of Balochistan.

Mengal maintained that there were serious question marks over the transparency of the July 25 polls, adding that the latest election was similar to the general elections of 1970

“The election results were delayed for 72 hours. Such a delay has never been witnessed in the past despite the fact that election commissions used to lack resources back then. Delaying tactics create doubts over the transparency of the electoral process,” he said. “Our mandate was stolen from at least 12 constituencies. The ECP has failed in its duty to guide the voters.”

Mengal, the former Balochistan chief minister, claimed that there was a deliberate effort to prevent BNP from forming a government in the province. He said the party had yet to take a decision on whether to sit on treasury or opposition benches, and added that Pakistan Peoples Party (PPP) and Pakistan Tehreek-e-Insaf’s (PTI) had so far invited it for dialogue.

Mengal said that separate committees had been formed by the party to deliberate on the affairs in the province and the Centre. He said that in the Assembly his party would pay particular attention to equitable distribution of dividends from the China-Pakistan Economic Corridor (CPEC) projects and the ownership of oil and gas resources. “One of our demand will be to build a cancer hospital in the province.”

According to media reports on Tuesday, the PTI communicated to the Q-League that it would name a candidate for the chief minister’s office from among the MPAs-elect on the party’s ticket. The party asked the Q-League leader and former Puinjab chief ministerm, Chaudhry Pervaiz Elahi, to consider the office of the speaker instead of the CM. It said that a strong and experienced personality was needed to run the house and Elahi would fit the role very well. If Elahi agreed to the suggestion, however, the PTI would be faced with a problem in the Centre where the two seats won by the former would be deduced from the number of MPAs-elect expected to support Khan in the race for the prime minister.

Meanwhile, some PML-N leaders continued to insist on Tuesday that they had managed to gain support of enough independent MPAs-elect to form government in Punjab. Another report doing the rounds was that the party had given up on the hope to get its CM candidate elected and was instead focusing on the speaker’s slot, while reaching out to the independents.