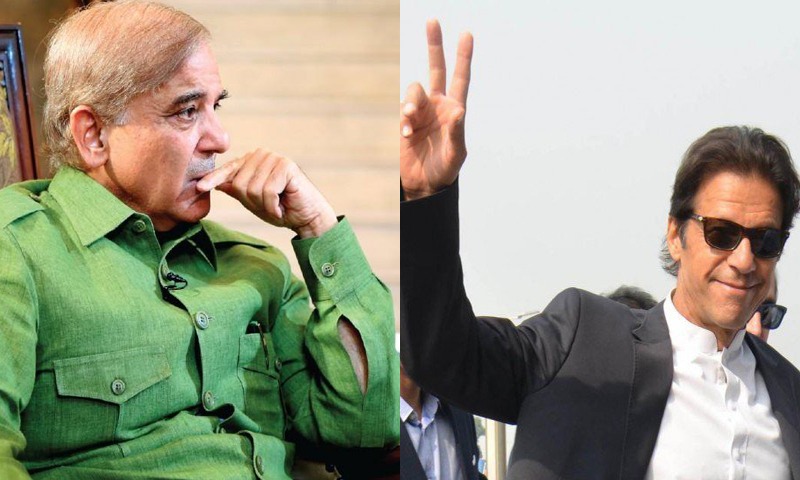 Pakistan Tehreek-e-Insaf (PTI) supporters started celebrations across Pakistan as their party, according to unofficial and inconclusive results thus far, is emerging victorious in the general elections 2018. On the other hand, Pakistan Muslim League-Nawaz (PML-N) has rejected the election results alleging ‘rigging’.

Vote-counting began as soon as polling ended at 6 pm on July 25.

Nearly 106 million registered voters were expected to cast their ballot- choosing representatives for the provincial and national assemblies.

A total of 85,307 polling stations were set up across the country for the general elections.

370,000 army personnel were deputed at polling stations to ensure security for the election, bolstered by an additional 450,000 police.

Other than PPP, Pakistan Muslim League-Nawaz (PML-N) and Pakistan Tehreek-e-Insaf (PTI), 122 political parties with religious, nationalist or ideological affiliations were contesting the 2018 elections.

3:50 am: NA-245 Karachi  PTI’s Aamir Liaquat Hussain is leading the poll with 972 votes while MQM-P’s Farooq Sattar is trailing  behind 566 votes

7:30 pm: NA-95, Mianwali According to unofficial and undeclared results from 1 polling station PML-N’s Ubaidullah leads with 55 votes, while Imran Khan PTI is second with 51.

President Shehbaz Sharif has expressed reservations over the election proceeding saying ‘public mandate has been dishounered’.

PML-N leader Mushahid Hussain has termed it ‘dirtiest election in the history of Pakistan’.

The Director General Inter services Public Relations  (DGISPR) ,in his tweet, has thanked nation for the love  received by Pakistan Army deployed on polling stations across the country.

He tweeted,”Thank you fellow Pakistanis. World has seen your love & respect for Pak Armed Forces & LEAs today. U hv rejected all kinds of malicious propaganda. We are strong because we have your unflinching support. Our lives are dedicated to Pakistan and its People.”

The Election Commission of Pakistan (ECP) decided not to extend polling time.

Pakistan Peoples Party (PPP) leader Farhatullah Babar asked for the voting period to be extended by 1 hour. Earlier today, PML-N had also asked the same but their requests were dismissed by (ECP).

Asif Ali Zardari and daughters Bakhtawar, Asifa are all smiles after casting their votes in Nawabshah 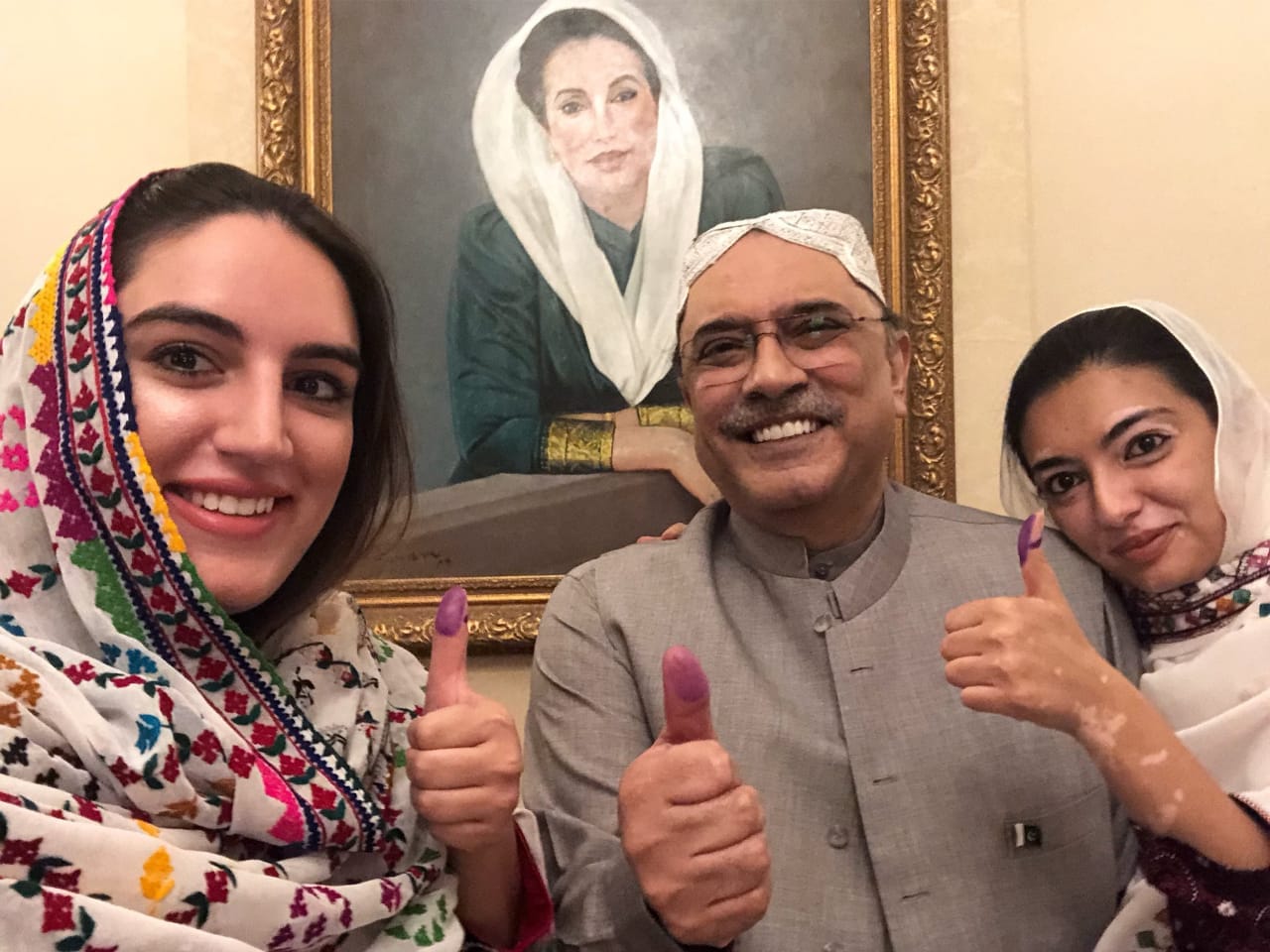 On occassion, the army chief said: “We are target of inimical forces working against Pak. We’ve come a long way in our comprehensive national effort to fail them. We are united & steadfast to defeat them, and ‘TODAY’ through our ‘VOTES’. Please come out & vote undeterred.”

COAS Qamar Bajwa and his wife cast votes at Rawalpindi

COAS Qamar Bajwa and his wife cast votes at Rawalpindi

The PML-N President cast his vote in Model Town, Lahore.

Just cast my vote. High time that all of you came out to vote for Pakistan's progress and prosperity. May this election be a source of peace and stability for the nation! pic.twitter.com/uiUZYdo09j

COAS casts his vote in Rawalpindi

COAS & his Mrs cast vote at Rwp.
“We are target of inimical forces working against Pak. We’ve come a long way in our comprehensive national effort to fail them. We are united & steadfast to defeat them, and ‘TODAY’ through our ‘VOTES’. Please come out & vote undeterred”, COAS. pic.twitter.com/J9DjRVNUAQ

After casting his vote, while speaking to the media, he urged all citizens to go out and vote against the status quo of two parties and he urged all Pakistanis to vote not for Imran Khan but for Pakistan’s future as it is their responsibility.

While speaking to the media, after casting his vote, he strongly condemned the terror attacks in Quetta and Larkana, and also reaffirmed his faith in his workers saying that Pakistan won’t be intimidated and will go out and vote.

The Chief Justice of Pakistan Saqib Nisar cast his vote in the NA 130 constituency in Lahore.

After casting his vote, while speaking to the media, he said that the promise of holding election of July 25 has been fulfilled and he urged every Pakistani citizen to make use of their democratic right and cast their votes.

In Sawabi’s city Kernel, outside the polling station, workers with different political affiliations were engaged in a heated argument which eventually led to a violent confrontation and as a result of firing one person lost his life while four are reportedly seriously injured.

Sources reported that queues of women could be seen in NA-5 and PK-12 constituencies and the district is witnessing the sight for the first time in Pakistani history.

Three injured after an explosion in Larkana’s NA-200

At least three people were injured in an explosion outside the polling station Larkana’s NA-200 constituency.

According to reports, the blast targeted a PPP camp near Shah Muhammad School. 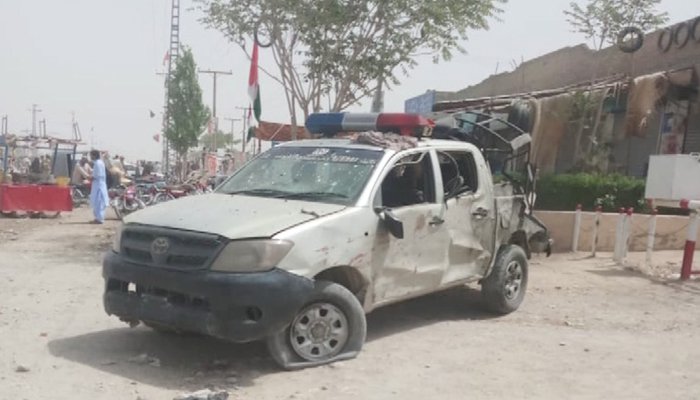 Explosion in Quetta has left 31 people dead and several others injured outside a polling station near Eastern Bypass in Quetta on Wednesday.

According to rescue sources, the explosion occurred near a police vehicle on routine patrolling.

At least seven people were said to be injured after clashes between two rival political groups at a women polling station in Sanghar Khipro area. Following clashes polling was halted at the polling station.

After clash between Pakistan Tahreek-e-Insaf  (PTI) and Pakistan Muslim League-Nawaz (PML-N) workers, the polling process has been stopped temporarily in Lahore’s NA-123.

7 people including a woman have been arrested from the NA 239 constituency in Karachi on account of rigging.

They allegedly had copies of a fake form 45. Further inquiry is underway.

Polling at Sanghar’s Tando Mitha Khan area had been halted after a polling agent and 4 other people were injured following a clash between two rival political groups inside a women polling station. The polling has now resumed.