The historic Saleh Kamboh Mosque in state of shambles — is WCLA listening? 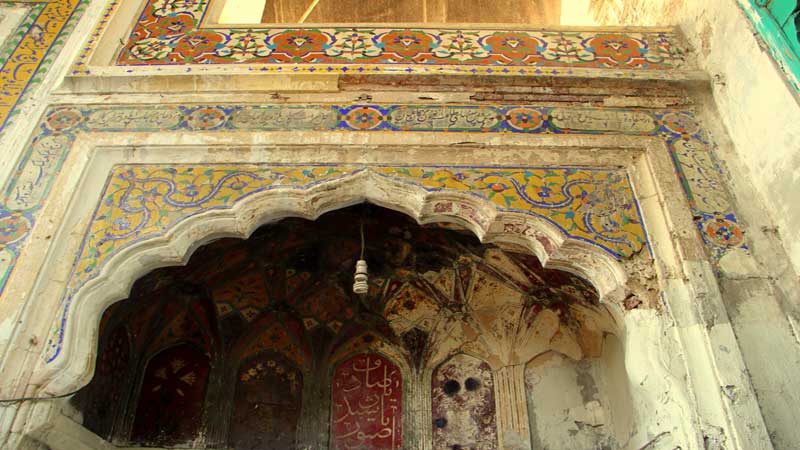 The Saleh Kamboh Mosque located inside Mochi Gate of Walled City Lahore is in a sorry state with no one owning up to the responsibility of taking care of it.

Sources informed that the mosque is in the list of those monuments that are sheltered by the Archaeology Department of Punjab but the authorities do not pay any attention to it and even after the establishment of the Walled City of Lahore Authority (WCLA) it still remains neglected whereas the local body of Anjuman-e-Tajran Mochi Gate is presently looking after the mosque on its own and no funds are provided by the government for its upkeep.

Sources further added that as the locals are managing the upkeep and repairs of the mosque, it has lost most of its original and historic essence which is a grave matter and should be a point of concern for the authorities as this mosque was somehow very similar to Wazir Khan Mosque in terms of decoration and fresco, but so far no one has taken up the preservation of the mosque in true sense to revive its historic value.

Sources further added that the historic value of the mosque is not being communicated to the masses and the locals are also considering it as a regular mosque and thus it is deprived of being a tourist site. Further the sources lamented on the poor condition of the mosque and said that the encroachments have also damaged the sanctity of the monument.

Sources were of the opinion that the hanging wires and transformers around it were a threat for the people during monsoon and otherwise too whereas the remains of fresco work on the mosque are also being damaged.

It is to be noted that untrained labourers, while carrying out white wash at the mosque, painted upon the beautiful fresco work.

Sources said that WCLA had already worked on the clearing of encroachments from Wazir Khan Mosque and restored it but they were not paying attention to this part of the city.

Additions in the structure of the mosque had also been made and there was no one to check on that and because of the ugly structures the real façade of the mosque is hidden now which was much similar to Wazir Khan Mosque’s façade. They added that the interior of the mosque is also damaged by posters, fans, electric cables and switches which has resulted in the deterioration of the historic fabric and embellishment of the structure especially the prayer chambers which were as colourful as Wazir Khan and Golden Mosques.

In case, proper measures are not taken to revive and restore the mosque, locals by making minor repairs and adding structures in the mosque would harm its beauty and very soon the real décor of the mosque and its look would be lost. About the history and importance of the mosque, WCLA Media & Marketing Deputy Director Tania Qureshi while talking exclusively to Daily Times said, “I must quote that Kanhaiya Lal Nansa, the author of History of Lahore wrote that this wonderful mosque, situated inside Mochi Gate, was a masterpiece. Whoever entered the city through Mochi Gate found this magnificent and colourful building right in front of them. This small mosque was once very comprehensive and beautiful and was not less than Wazir Khan Mosque. Muhammad Saleh Kamboh was a well known storyteller during Shah Jahan’s reign and was the teacher of Mughal Emperor Aurangzeb. His Shah Jahan Nama is one of the most important original sources of Shahjahani era events. He also commanded the force of 500 during the period of Shah Jahan. He was appointed as governor of Punjab due to his sharp wisdom during Shah Jahan’s rule. Muhammad Saleh Kamboh served as a Mughal admiral and was killed while fighting alongside his fleet against the Ahoms at Pandu on Bengal-Assam border. It is said that he died in AH 1085 which is accepted by some historians. He was the one who built this mosque. The mosque was completed during Aurangzeb’s reign, but the unique Shahajahani features of multifold arches, stalactite squinches, delicately executed floral arabesque and interlacement in kashi and fresco are seen in the mosque. The mosque’s structure proves that it was built under the supervision of Shah Jahan’s court’s historians and architects. This mosque is smaller in size if compared to other Mughal era Mosques.”

WCLA Conservation & Planning Director Najam Saquib also while talking exlclusively to Daily Times, said, “We are well aware of the importance of the mosque and soon we will move to Mochi Gate area and this mosque will be on our priority for conservation.”