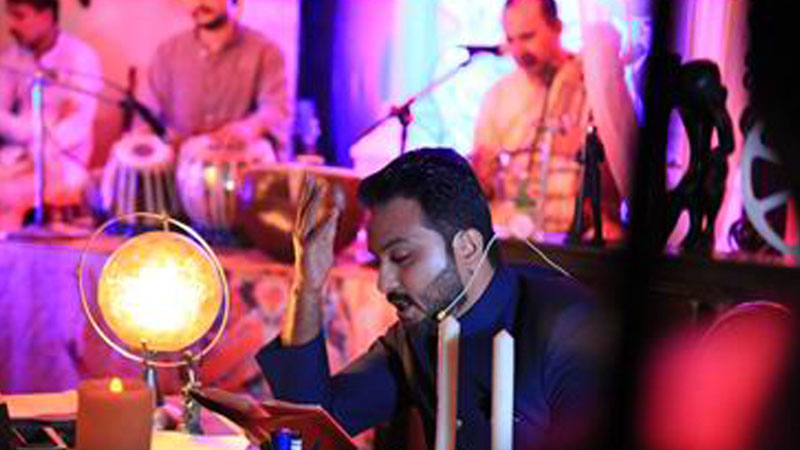 There are still such people in our society who love to read Urdu and appreciate this beautiful language that possesses such depth in vocabulary. It is heartening to see people make an effort to promote this language. One such event, “Suno Kahani: Reader’s Club,” was held at Stars Club, formerly known as the Cafe Grand in Saddar, Karachi. Actor Studio Karachi in collaboration with Stars Club, organised the memorable evening that was hosted by Azhar Hussain Azmi, an associate creative director at a leading advertising agency and Munazzah Motiwala, an actress and model.

Also present were Akbar Subhani, a veteran film and television actor; Sajid Shah and Tabraiz Shah. During this unique event, four talented people recited pieces of Urdu literature that transported the audience to the yesteryears of the time these stories and poetry were written.

The speakers included Talat Hussain, the versatile actor and an icon of Pakistan’s radio and television industry. He recited poems of Nazar Muhammad Rashed. His deep voice and elegant delivery style cast a spell on the audience.

The show started with Aliee Shaikh (a television actor and the CEO of Actor Studio Karachi) reading a compelling story, Ek Jumla written by Imran Shamshad. The story, though simple in words had a profound and deep impact on the audiences.

This fusion of the old and new brought back recollections of the era when both classical music and Urdu stories and poetry were revered and cherished.

Unfortunately, the amalgamation of English in our daily conversations and the use of it gradually being equated as a status symbol reduced the importance and significance of the Urdu language.

Events like “Suno Kahani: Reader’s Club” will help to revive the culture of reading Urdu.

Interestingly, the events date (July 8) was significant for two reasons, it commemorates when Stars Club officially opened its door to the public and the club soon became a hangout for literary icons and those who hold a deep appreciation for arts and literature. Secondly it is the birthday of Kashif Warsi, the owner of the Stars Club. It is because of his vision and dedication that he a hub of art and culture in Karachi during the 1920s and 30s was revived.

“Suno Kahani: Reader’s Club” was undeniably the first of such a historic event that will resuscitate and recover the spirit and essence of Urdu language. The effort of Stars Club and Actor Studio Karachi in reviving the spirit of Urdu language is praiseworthy, in an age when Urdu’s soul is fading away, it is through such events that Urdu will find a place to convalesce and regain its strength for it will always remain a language filled with dynamism, beauty and heartiness.

The writer is a columnist and author of You Rise Today!