Protest for recovery of missing persons to continue on Eid 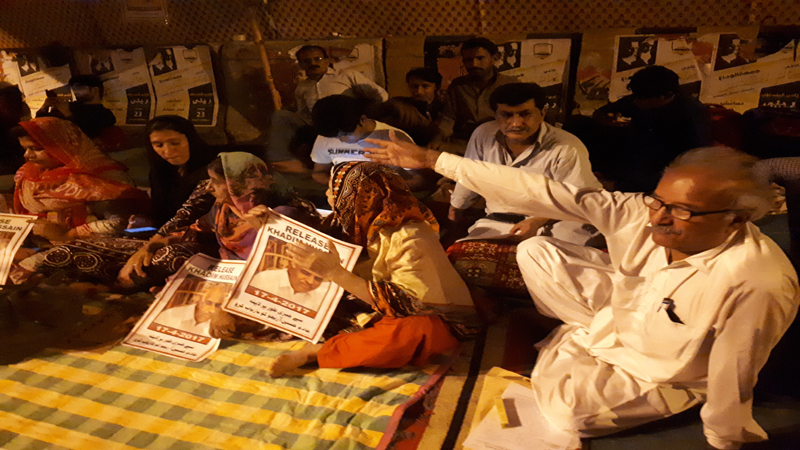 KARACHI: Family members of missing persons of Sindh, who have been protesting day and night in front of Karachi Press Club for more than a month, announced that they would not celebrate Eid-ul-Fitr in protest against the forceful abductions of missing persons.

“If someone from your family goes missing mysteriously for something he has not done, how can you celebrate Eid? Eid is purely a festival of happiness,” said Sorath Lohar, convener of Voice of Missing Persons Sindh.

“Almost all the family members of the missing persons, are either sitting with me at this protest camp or back at their homes asking me every day when their loved ones would return and I have no answer for them,” Lohar said with tears in her eyes.

According to Lohar, around 160 persons from Sindh including 60 political workers and Sindhi nationalists were reported missing “So we are sitting here peacefully to demand their safe and immediate release” said Lohar.

“But it seems like nobody is listening to us and now this protest will continue till the last missing person returns home,” added Lohar.

Lohar said that the majority of the missing persons were not even political workers and human rights organizations had repeatedly demanded their return but they still had not been recovered yet.

According to Lohar, the families of missing persons had started their protest at Karachi Press Club in the month of May but on May 20, heavy contingents of Sindh police, Rangers and plain cloth personnel arrived and attacked the protest camp.

According to Lohar these personnel tortured both women and children. She said they tore the clothes of female protestors in the confrontation and arrested a total of five protestors including a woman.

After that incident, Voice of Missing Persons Sindh announced to continued the protest until ‘safe recovery of every missing person of Sindh’.

“We will continue this protest for months, even years, if all missing persons are not released,” Lohar announced.

“Why they are not being produced in the courts?,” asked Lohar “We have no idea if they are even alive, we don’t know their whereabouts. We don’t know why they are still missing”

“We demand that they be produced and tried in the courts, punished and sent to the jail if they are found guilty so at least families may know the whereabouts of their loved ones,” she said.

Renowned Sindhi writer and leader of Sindhi Adabi Sangat, Taj Joyo, while sitting on the protest camp, told Daily Times that if someone did something wrong against the state, they must be produced before the court but forcible abductions could not be tolerated.

He demanded the release of missing person of Sindh, Balochistan and other regions of Pakistan.