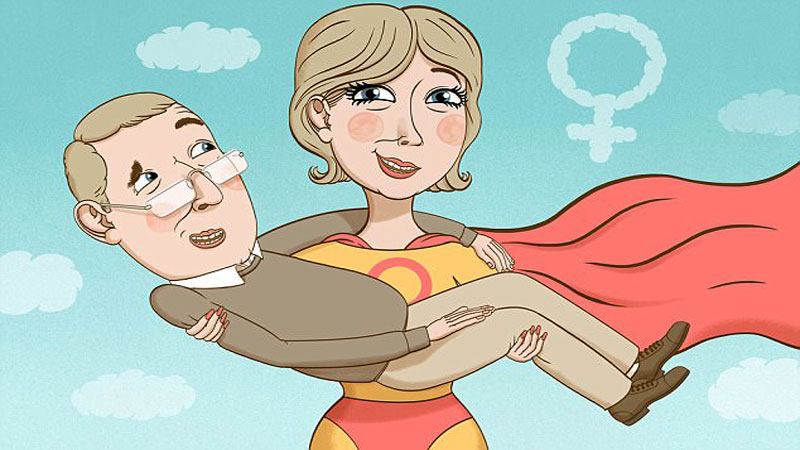 Men don’t necessarily proceed in a politically correct, enlightened fashion to woo the woman of their dreams. What men think they want and what will actually make them happy are entirely two different things. This is an obnoxiously blatant reminder of the fact that on their hedonistic journey of philandering they’ve temporarily helicopter landed their way to you, and while they’ve come far and convinced you into believing they may want to put a cork back to that raging bottle, girls (you overly emotional ones), they’ve still got a long road ahead of them.

Here are five game changers for you, regardless of how unrefined these strategies might be, that can conduce relationship longevity, or better yet, help foster your own emotional well-being. Because well, you know, pretty girls don’t cry, they know exactly what they want.

When a guy says “get over yourself”

Here is an example of someone who has already honed his trap of power play dynamics over you. He has befittingly kickstarted the courting phase of the relationship by projecting his false and most inflated self; he has zeroed in on you as his target by valuing you for all the “right” things that you want to be valued for. Needless to say, right now, your natural defenses may be down because he’s flirtatious, exciting, charismatic, fun and all that stache, and even though what he said feels like a jagged piece of shrapnel grazing your heart, you shrug it off as mixed feelings because you’re unable to look at the situation objectively. Until and unless you’ve fancied the idea of bailing out into the night as a wailing Cinderella in rags looking for a miracle to save you, expose him – before he goes back from rude to irresistible as swiftly as he went from irresistible to rude.

Are you freaking kidding me? If you feel a sense of nervousness, fear or sadness even when you’re feeling his scruff brush against your cheek, my question is: Why in the whole wide world would you want to be with this person? A man is either compatible with you or he’s not, and since you’re an overly emotional girl, you’re pretty much confusing being compatible with experiencing an up-and-down emotional rollercoaster with him. You always feel bad, tense or nervous about him leaving or him not wanting you anymore, and then when he shows you any sign of approval and signal that he’s sticking around, it feels extremely relieving and exciting – worth the ride, isn’t it? Well, NO. My advice: Start listening to your insides, and while you’re at it, indulge your senses and let your body be more sensitive to the rhythms. This feeling of relief in contrast to the low of the anxiety and constant tension that you’re going through can be mistaken for happiness and is, in fact, what makes you think you two are compatible for each other. The low makes you need the high, but the high that he gives you isn’t really a “high.” He isn’t making your life better, he is simply making you feel so bad that when you get that reassurance, it seems good by comparison.

When a guy says “you’re such a smart girl”

Oldest trick in the books; this one doesn’t even need a lot of explaining to do: men consider analytical ability to be a stereotypically masculine quality, and being competent and competitive are qualities that are particularly important to men, so female intelligence might be threatening for heterosexual men anywhere sizing up a prospective partner. Basically, if you do better than him socially or professionally, he feels terrible. This guy will stick to you if you prioritise your life in a way that’s compatible with how he prioritises his; he’d rather have a woman willing to be in the backseat. What should a career-driven and ambitious woman like you do then? Dumb it down a notch for this guy or go looking for less educated fish in the sea if you don’t wish for your single life to part open on you midway.

When a guy says “you’re too emotional

Here’s the kicker. This guy dreads getting emotionally intimate. He views intimacy as weak. In his mind, becoming intimate with someone cancels his superiority and demystifies him. Also, since intimacy is universally sought, it is perceived as common, and you should know by now that this guy does not feel any common pursuit is worth his precious time – because if it is common, how can it possibly be worthwhile? This guy might be selfish enough for his own needs but not smart enough to know that when you fall, you fall hard because you give everything your 100%, including love. This is why you never said no, never gave up when he vanished weeks at a time, and never deleted his number even though you should have after he suddenly disappeared from the relationship without ending it and came back three or so months later with an explanation to lure you back in. My point is this: Are you emotional? Sure. Should you apologize? No. So he can take his pretty face and go court himself elsewhere, because you’re only complicated to a man who wants to quantify your love by the number of times you tidy up his sock drawer.

The phrase ‘say what you mean and mean what you say’ seems to have little place in the dating world. With the added-on “right now” in the catchphrase above, the situation becomes even more confusing. While you girls might decode his suave language as meaning there’s hope for the future, it’s less than 0.000001% likely that there actually is, and what he just said is 100.100000% credible to the fact that he’s subtly saying it won’t work out, “with you”. No matter how sweet a guy acts, if he spits these noxious words out through his teeth, read them as him wounding up over a “goodbye forever” text from your side.