The legality of the Syrian airstrikes — II

Criticism of the American, French and British airstrikes on Syria is highly revealing. It highlights how much these ‘rogue states’ respect and value international laws and norms. In reality, dictionaries can use their words and actions to encapsulate the meaning of the word ‘hypocrisy.’

The French view the attack ordered by President Macron as the first time he has acted decisively as the country’s commander in chief. While Macron did continue the battle against jihadists in West Africa, this attack is to the credit of France’s youngest modern president who has neither served in the army nor has he carried out any military service.

In fact, this was his war since he had drawn the ‘red line’ after the Syrian regime crossed Obama’s imaginary red line. Macron claimed, “When you fix red lines, if you don’t know how to make sure they are respected, you’re choosing to be weak. That’s not my choice.”

Thus, France shares with America the need to follow through on a threat; a phenomenon called ‘credibility’.

“We had reached a point where these strikes were necessary to give bring some credibility back to the (international) community”, Macron also argued.

France’s former foreign minister, Hubert Védrine, said that the attacks strengthened French diplomacy because they highlighted France’s credibility. Bin Laden would definitely agree with that argument. Indeed, Jihadist networks gain more credibility and followers when they follow through with the promise of an attack.

While the Americans and French were all about credibility, the British Prime Minister Theresa May argued, “The element of surprise is crucial” to the attack. She stands on the other side of this argument and does not claim that the attack was illegal or unjustified, but that shock and awe is better than credibility.

It remains a sad irony that the very nations who developed the present norms of international law at Nuremberg in 1945, are now its worst violators

Much of the criticism of the strikes came from Labour leader Jeremy Corbyn. He called the British attack ‘legally questionable’, but he is no different from others in completely disregarding international law. He said that the British government must be ‘accountable to this Parliament and not to the whims of the US president’.

That is a sensible statement only if one views British law with respect, while pouring scorn on international law. Moreover, Corbyn told the BBC, “When we are talking about military action in a third country, that is a decision that Parliament should be taking and not the government itself.” Thus, the ‘legally questionable’ has to do with British law instead of international law.

Corbyn’s words are commendable when compared with the words of Britain’s Secretary of International Development, Penny Mordaunt who said, “Outsourcing that decision to people who do not have the full picture is quite wrong and the convention that was established I think is very wrong.” 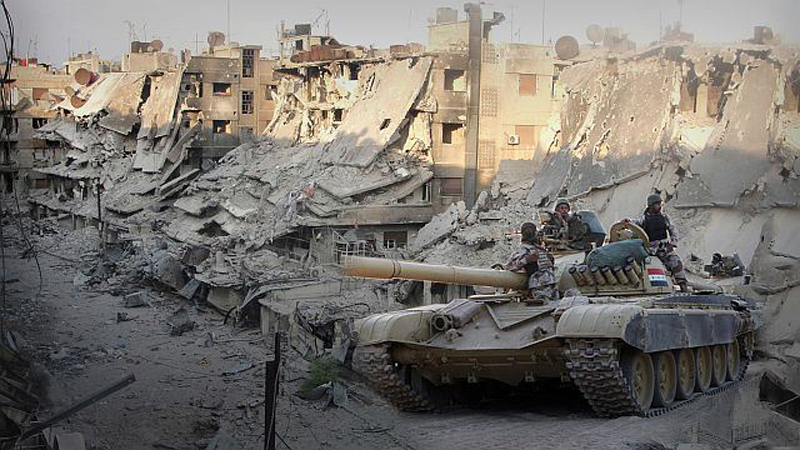 Moreover, while defending her actions, British Prime Minister Theresa May argued, “We have not done this because President Trump asked us to, but because it was the right thing to do”. Attacking Syria she said was “legally and morally right” for the UK. I wonder if it would be ‘legally and morally right’ for Iran to strike Israel or Saudi Arabia?

Macron argued that despite not being sanctioned by the UN, the attack had “international legitimacy” because Syria didn’t destroy its chemical weapons under a 2013 resolution. Interestingly, this statement gives more importance to a UN resolution than it does to the UN charter, which clearly forbids threatening and attacking another nation.

Criticism of the airstrikes against Syria, therefore, is predicated on how domestic legislatures in these countries were not asked before the attacks were launched. The only sound and meaningful critique came from the European Parliament in Strasbourg where the French President was challenged by the Sinn Fein MEPs, who led a protest against the airstrikes and displayed placards declaring ‘Stop the war in Syria’, ‘Stand up for international law’ and ‘Hands off Syria’.

Apart from that, most of the criticism is reminiscent of watching fools incessantly talk about things that do not matter. Laurent Wauquiez, leader of the centre-right Les Républicains party in France, said he “did not believe in punitive strikes”. On the hard left, Jean-Luc Mélenchon called the strikes a “North American revenge attack and an irresponsible escalation”.

The far-right leader Marine Le Pen added that France had missed a chance to show the world that it was “an independent power” on the international stage.

In his defence, Macron argued that by striking Syria, he had “saved the honour of the international community”. Again, one can find a parallel between this argument and the narrative of jihadists who wish to attack the West in order to restore Islam’s honour.

Macron also defended his actions by arguing that the mandate to attack Syria “is given democratically to the president by the people in the presidential election”. Furthermore, the justification goes that about a 100 years after France experienced a chemical weapons attack on its soil, it acted this way to prevent further bloodshed.

Once again, ISIS would agree with this argument because the radical group itself is trying to prevent any continuation of the Sykes-Picot agreement that was signed a 100 years ago.