‘Jirgas settle dispute among rivals, not between state and citizens’

* At their Swat rally, PTM leaders reiterate that all their demands are constitutional 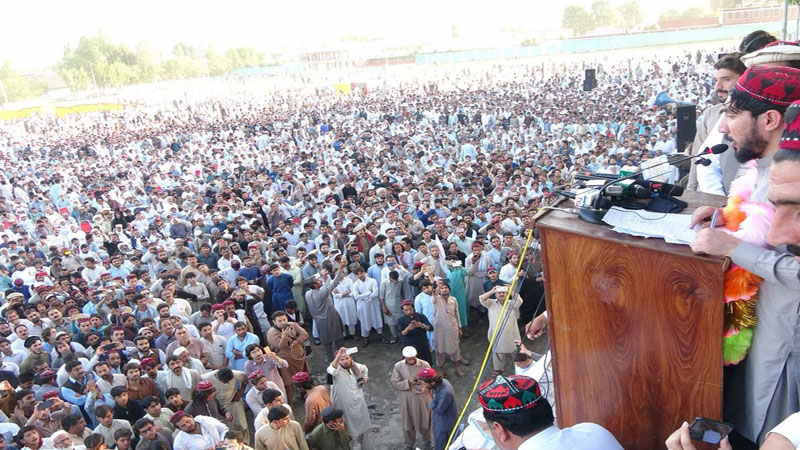 The roads leading up to the valley of Swat, besieged and scarred by years of militancy, were lined with billboards and walls festooned with portraits of Manzoor Pashteen, the young leader of the Pashtun Tahaffuz Movement (PTM), as countless vehicles from various parts of the country made their way to Kabal tehsil in Swat on Sunday, where he was scheduled to speak at a public gathering.

The district administration had ensured strict security measures to avoid an untoward incident. In his address at the gathering, Pashteen commented on the Jirga constituted by the corps commander of Peshawar, saying the Jirga was formed to settle disputes between two rivals. “We are citizens of this country, not rivals who want to settle a dispute… We are citizens demanding our constitutional rights,” he said.

Prominent among the crowd of thousands of protesters were the families of missing people. There was collective mourning for their loss and pain by the crowd, most of who wept openly with the families of those whose loved ones had gone missing or were killed extra-judicially in internment centres. Among the speakers at the gathering, were parents of some of the children killed in the attack on Army Public School on December 16, 2014.

Pashteen welcomed all those who had travelled to Swat from various parts of the country to attend the gathering and demand their constitutional rights. “Swat is a paradise in our country which has been ruined by the erroneous policies of the state… those policies remain enforced,” he said, adding: “But I request you to listen to our demands, they are genuine… and we will never adopt a policy of violence because we love peace.”

He vowed that the PTM’s struggle would continue till every last missing person was reunited with their family.

The police had estimated the size of the gathering at 5,000 people, but according to the PTM’s estimates, the number had exceeded 10,000.

“Our demands are grounded in reality, that is more than 400 missing persons have been reunited with their families since we began our struggle,” Pashteen said.

Apart from scores of families of missing persons, the gathering included large numbers of civil society activists and contributors for international media.

The crowd was moved to tears as the children of people who have gone missing took to the stage to share their plight. The heartrending narration of their pain was meant to make the masses aware of what they have been going through. He derided the allegations made against him that were publicised through posters in which Pashteen was compared to Tehreek-i-Taliban Pakistan’s Fazlullah.

Addressing the authorities of Swat, the PTM leader said if anyone harmed the comrades of the movement in Swat, they will speed up their movement and arrange another Jalsa in Swat. He announced that the gathering planned in Karachi on May 12 would go on as planned. “We will raise awareness about the human rights violations taking place in our country,” he said.

He rejected and termed as fake news a rumour that PTM and its workers had forbade a participant of the gathering from waving Pakistan’s national flag.

During the rally, an 11-year-old child, Romaisa, who had come from Barikut area of Swat, was called on the stage to share her story with the audience. She said her father, a manager in the National Bank of Pakistan, had been picked up by security personnel when she was barely a year-old in 2009. She said the family received a call from Lakki Marwat internment centre in 2017 to come and receive his body. He had died of torture, she said, adding that she wanted justice for him.