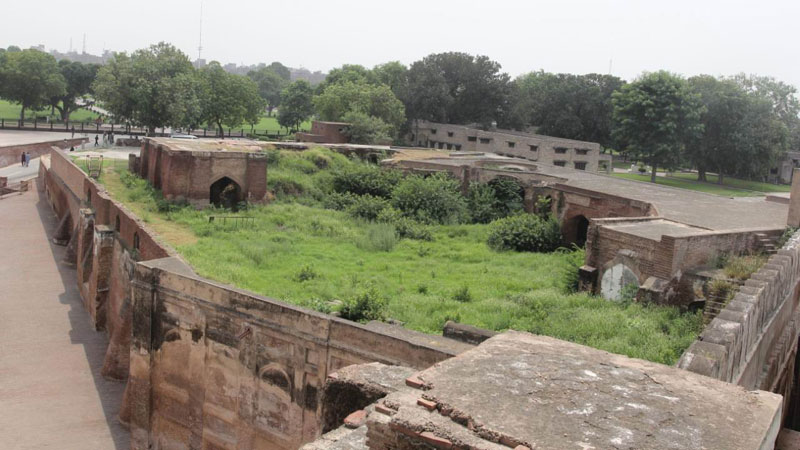 An astounding revelation of Royal Kitchen , commonly called Shahi Bawarchi Khana’, inside Lahore Fort has mesmerised many who are now visiting the fort. A no go area inside the fort has unexpectedly altered into a tourist spot but still many of us are unaware of the majesty of this part hidden inside the grand fort of Lahore.

This is the Royal Kitchen which was once the aromatic area filled with enticing cuisines cooked for the royals and aristocracy that resided or visited the Lahore Fort. You must be thinking where it is if you have visited the fort long ago. Well this kitchen is located behind Alamgiri Gate and as you climb up the royal ramp while entering the fort through British era gate, you will find it on your right. A narrow passage will lead you to this kitchen and as you enter there, you will be awe stunned with the beauty and its open courtyard. You will see a mesmerising structure now conserved aesthetically and carefully by the Walled City of Lahore Authority and Aga Khan Trust for Culture.

Before I talk about the present condition, let me take you into the horrifying past. As I went to this place almost three years ago, I had to make my way through the waist high shrubs amidst the danger of a reptile biting me. It was a horrific site with all the beautiful arches collapsing and some of the structures fallen apart. All the bricks and mortar were falling out of the structures and the roof was almost colliding, and I was afraid while walking inside the dead crumbling arches. What a weird picture it was, trust me. Now keeping in mind this depiction imagine the past glory this place went through. It was a kitchen built during the reign of Mughal Emperor Shah Jahan. It was where the food and delicious cuisines with special Mughal recipes and spices used from Akbari Mandi were prepared along with a huge variety of drinks and sweets.

Many parts of the building are demolished and many collided with the passage of time. Nobody bothered to preserve this majestic dying structure until 2015, when the Walled City of Lahore Authority took up the initiative of restoring it to its original glory

The helpers in their gaudy dresses, head gears and fine crockery, would carry the food from the kitchen to the chambers of the king, queen, princes, princesses and other courtiers. Any emperor or nobles of the neighbouring areas were also served with food cooked in this very kitchen. But who knew it would be in shambles after the Mughals.

As the Sikh took over the Lahore Fort, the Royal Kitchens were damaged along with many other structures inside Fort. This kitchen was vandalized the most I think. It was converted into a food and grain store room and at the same time it was converted into a stable for horses and other animals. The kitchen was no more there. Then came the British rule in the sub continent and they took over the fort as it was a hot seat for all the conquerors and captors. The British in 1849 converted it into interrogation cells and jails. The exquisiteness of the Royal Kitchen died. The open verandas were sealed with bricks and new structures like iron doors and beams were added along with the construction of an upper storey. The upper storey served as offices for policemen. The electricity supply lines, sewage system and water drains were laid in this kitchen during the British period.

British rule ended but it was not an end to the destruction of this kitchen. Now let me tell you the post partition (1947) atrocities. The Police Department used it as interrogation cells until late 1980s, when they were handed over to the Archaeology Department. The beams, wooden doors, windows were taken away and most of the parts were smashed. Maybe those were pulled down during the riots.

The building was extremely tumbled down and later some of the dilapidated parts were demolished and the offices of Archeology Department were constructed there. The building that we see today is the remaining part of the huge kitchen complex. Much of the parts are demolished and many collided with the passage of time. Nobody was there to listen to the cries of this majestic dying structure until 2015, when the Walled City of Lahore Authority took up the initiative of restoring it to its original glory.

Clearing of the wild plantation, visual and technical documentation of the building was done in the first phase of starting on with the conservation. Experienced architects and conservationists were called in to help and analyze the conservation process. The objective of the conservation and restoration project was to preserve the royal kitchen by conserving and restoring its structural fabric and presenting its original functions and integrating the royal kitchen into its surrounding context. Complete investigations and structural assessment of the building was carried out. The structure was strengthened; eastern collapsed parts were restored, some missing parts were rebuilt considering the present references, drainage was improved and flooring was re-laid as it had vanished. Finally the damaged part of fort got a new life and now it stands majestically as a restored and conserved piece of Mughal architecture. 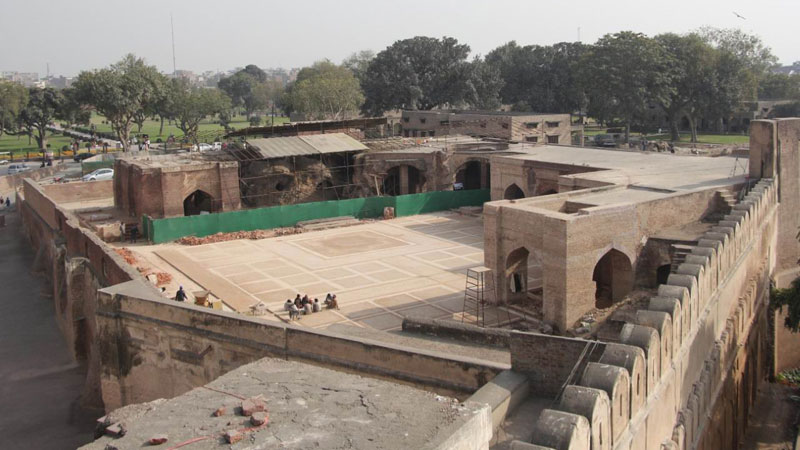 The Royal Kitchen has now become a special part of the guided tour of Lahore Fort and I am glad that tourists are fascinated by the aura of this site. According to the Walled City of Lahore Authority the kitchen would be turned into an activity and cultural center with different activities like seminars, talks, theatre, cultural evenings being held there. Also one part will be converted into a museum depicting the phases the kitchen went through. I think it will be very interesting for the tourists visiting it. One another advantage of this conservation is that now this kitchen has become a part of its surrounding fort context as it is slightly out of the main fort area.

In my opinion we should be preserving other sites as well on the similar standards so that the future generation has a chance to cherish and admire the history of their ancestors. Many structures in and around Lahore are waiting for repair and preservation and it is about time that these are maintained.